Another day, another win for both Team Canada men and women at the 2016 World Senior Men’s and Women’s Curling Championships taking place at the Karlstad Curling Arena. 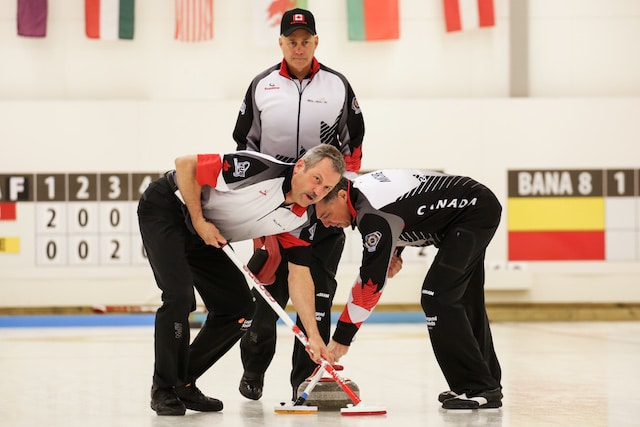 Randy Neufeld scored six points in the third end on the way to a 13-3 victory over Gus Van Imhoff of the Netherlands on Monday evening. Neufeld and his La Salle, Man., team of third Dean Moxham, second Peter Nicholls, lead Dale Michie, with coach Bill Tschirhart, stole two more ends to put the game out of reach. “He had a shot and we knew that all end,” said Neufeld. “If he didn’t make it we’d have a big end, and it worked out for us.” “I think we just need to try playing better each game and I think that’s happening,” he said. “I feel really good that we’re trying to get it the right way.  What I stress is that we’ve got to concentrate and play well.  We need to stay with our plan.” Earlier in the day, Terri Loblaw and her Calgary foursome of vice-skip Judy Pendergast, second Sandy Bell, lead Cheryl Hall and team coach Judy Erickson dominated the scoreboard in a 13-3 win over Finland’s Saara Markkanen. “So far, so good,” said Loblaw about the team’s success after four games. “We have a strategy for each game and it doesn’t matter who our opponent is, we’re just playing our own game.” “This whole (event) is fantastic,” she said. “We’re meeting a lot of people from all the countries. It’s awesome and it’s a great experience for us. We’re trying to make a holiday out of this as well as concentrating on the games. I didn’t know what to expect but this whole thing is better than I anticipated.” 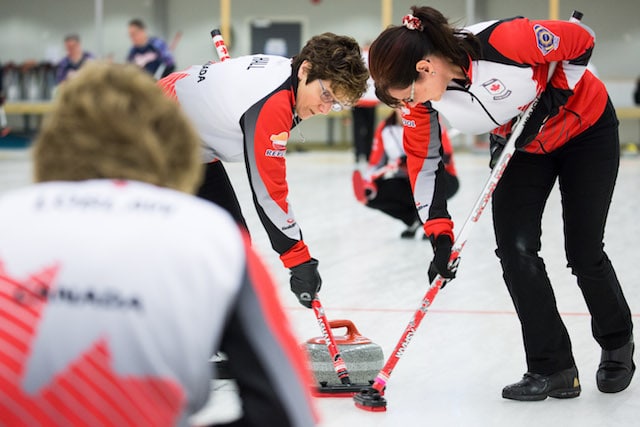 Cheryl Hall and Judy Pendergast bring another rock into the house during action at the 2016 World Senior Curling Championships in Karlstad, Sweden (WCF/Céline Stucki photo)

“This experience is awesome,” Neufeld agreed. “I’ve never been to Europe before, playing or travelling, so it’s great.  We have time off, and we have a lot of friends and family here, so it’s great.” The Canadian men and women remain undefeated after four days of competition. Neufeld is at the top of Men’s Group B standings with a 4-0 record, while Loblaw is 4-0, tied with England’s Judith Dixon at the top of Women’s Group A standings. Tuesday is a busy day for Loblaw: she’ll face Dixon in the morning draw (5 a.m. ET) and Japan’s Miyuki Kawamura (1-3) in the final game of the day (5:30 p.m. ET). Neufeld has only one game (5:30 a.m. ET), against France’s Pascal Adam (2-2). Live scoring from the 2016 World Seniors is available at https://www.worldcurling.org/wscc2016/livescores