The momentum continues to build for undefeated Marliese Kasner and Dustin Kalthoff as they wrapped up the round robin at the World Mixed Doubles Curling Championship with another commanding win on Thursday in Karlstad, Sweden. 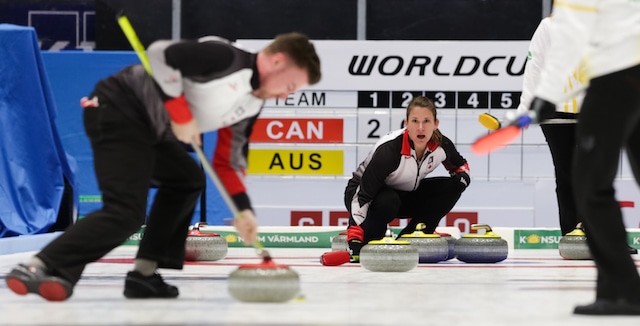 Against Australia’s Ian Palangio and Laurie Weeden, the Canadians showed why they’ve been at the top of their pool for the entire competition. Using Kasner’s strong hitting ability with last rock, the Saskatoon duo, with coach Jeff Stoughton and team leader Jim Waite, pressured their opponents into misses and stole four ends – including five points in the seventh – on the way to a 13-1 win. The playoff matchups are yet to be determined, but Kasner and Kalthoff are assured a spot in the first round, based on their final record of 6-0, which puts them in first place in their group. Go to the event website, https://www.worldcurling.org/wmdcc2016, to see the games and broadcast schedule. You can also find live scoring, the schedule and team lineups.