Neufeld through to semifinals at World Seniors

Canada’s Randy Neufeld scored a single point in the last end to win a see-saw battle over Scotland’s Gordon Muirhead during quarter-final action at the World Senior Curling Championships in Karlstad, Sweden on Friday. “That was a well-curled game,” said Neufeld afterwards. “He made a great shot in six and we knew it was a battle right the way to the end.  We needed to get the full four-foot (with my last stone in the eighth) and the boys put their heads down and we got it – pretty good for seniors.” “I think if we’d played any other team we’d have beaten them,” said Muirhead. “They’re the best team here.  But that’s the way it goes. We’ve enjoyed the campaign because the boys have been great.” 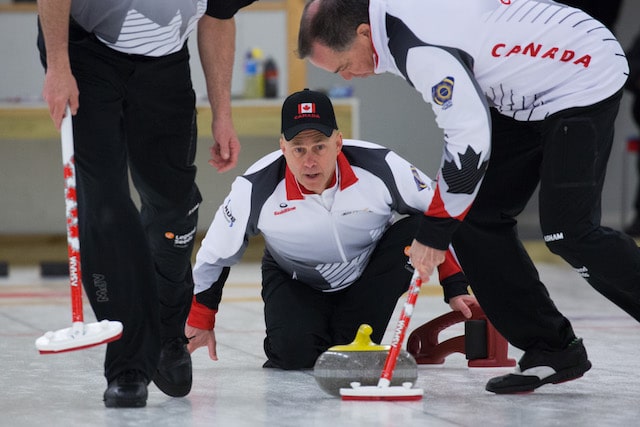 Earlier in the day, Neufeld and his LaSalle, Man., team of third Dean Moxham, second Peter Nicholls, lead Dale Michie, with coach Bill Tschirhart, finished off the round robin in style with a 10-1 win over Gary Gumprich of Israel, in a game that saw Canada steal the first four ends to accumulate an invincible 8-0 lead at the break. “In those last couple of games I felt the team really, really focussing and playing for the playoffs,” said Neufeld after the final round-robin game. “I feel really good about where we’re at right now to go forward. I think we’ll just keep going the same way and keep playing the way we have been. We didn’t change our plans a whole lot all the way through and we feel really good going forward.” That optimism paid off in the tight game with Scotland. Tied 3-3, Canada was able to blank the seventh and retain the all-important last rock in the final end. That was the difference in the 4-3 win, giving Neufeld and his team a ticket to the semifinals and bringing them one step closer to the podium.

After finishing the round robin with a 7-1 record, Terri Loblaw and her Calgary foursome of vice-skip Judy Pendergast, second Sandy Bell, lead Cheryl Hall and team coach Judy Erickson will not be moving on in the playoffs after losing to a strong German team in the quarter-finals. With former national champion Andrea Schoepp throwing last rocks, and Monika Wagner skipping, the Germans scored three points in the final end to defeat the Canadians 6-4. Neufeld will play Ireland’s Peter Wilson in the Men’s semifinal at 2:30 a.m. ET, with the medal games at 7 a.m. ET. Details can be found on the event website at https://worldcurling.org/wscc2016 Live scoring from the 2016 World Seniors is available at https://www.worldcurling.org/wscc2016/livescores