Canadians Marliese Kasner and Dustin Kalthoff handily won both their games in the playoffs of the Classification Round at the World Mixed Doubles Curling Championship on Saturday to secure a fifth-place finish and eight points in the all-important ranking for Canada in Olympic Mixed Doubles standings. 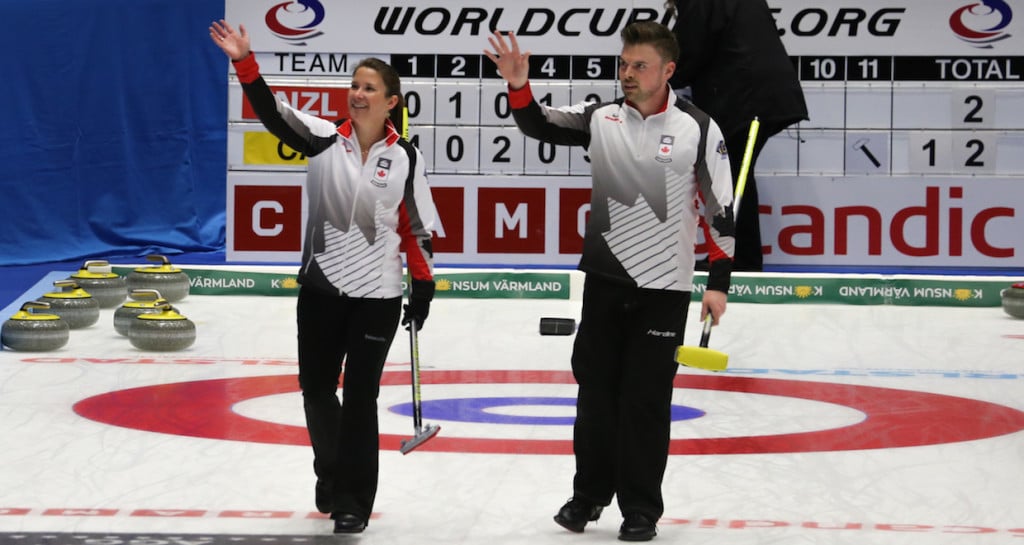 Marliese Kasner and Dustin Kalthoff wave to Canadian fans after a win during the round robin of the 2016 World Mixed Doubles Curling Championship in Karlstad, Sweden (WCF/Richard Gray photo)

Saturday’s performance was an impressive bounce-back for Kasner and Kalthoff after a heartbreaking loss to Scotland in the quarter-finals on Friday, which removed them from medal contention. “After yesterday we were quite disappointed with not pulling through against Scotland, but we knew there were lots of points on the line for Team Canada with points for the Olympics, so yeah, we’re pretty proud that we came off with two wins today and got the extra points that we needed,” said Kasner after the final win. “We came out (against Estonia) wanting to have some fun and making some shots again. We continued to do that, and got them on a couple, and the game went our way, so it was good,” she said. After winning the semifinal 10-5 over Finland’s Oona Kauste and Tomi Rantamaki – a game in which Kalthoff was 100 per cent on takeouts – Canada came out firing against Estonia’s Marie Turmann and Harri Lill. They stole four points in the first two ends and never looked back in a decisive 8-2 victory. “(To be at a curling event with) 42 different countries is pretty cool,” Kasner said. “It’s a great event, and it’s great that everybody has a chance to compete in it. We’re pretty proud to be fifth out of all those teams.” Russia’s Anastasia Bryzgalova and Alexander Krushelnitskiy won the gold medal with a 7-5 win over China’s Rui Wang and Dexin Ba. The USA’s Tabitha Peterson and Joe Polo won bronze, the first World Mixed Doubles medal for USA, defeating Scotland’s Gina Aitken and Bruce Mouat 9-7. Go to the event website, https://www.worldcurling.org/wmdcc2016, to find information about teams, scoring and final standings.