This week, John sits down with a man who has had one the best curling seasons in recent memory, coming second at the Tim Hortons Brier, hoisting three Grand Slam titles, and winning the Grand Slam Cup before the final event of the season is even played. He’s been to 13 Tim Hortons Briers, won an Olympic gold medal, and he has a highway named after him, which is about the most bad-ass thing I can think of. Welcome to Magical Question Fun Time, the Curling Canada feature where comedian John Cullen sits down with your favourite curlers for interviews like you have never seen. Each interview will feature eight questions: five standard questions that will be asked to each curler, two questions specific to that curler, and one question that the curler interviewed before them asks. 1. What’s the nicest shot you’ve ever been a part of? Brad Gushue: I think it would have to be last year’s Brier, playing Kevin Koe. (Click here to see the video clip: https://www.youtube.com/watch?v=42OQ9wr336A) It was late in the week, and we made a…I don’t even know how to describe it, really. A double run-back, around the horn thing (laughs) to win the game. It was big for us because it was also a shot that eliminated Kevin, and with him being one of the favorites in that field, it was big. 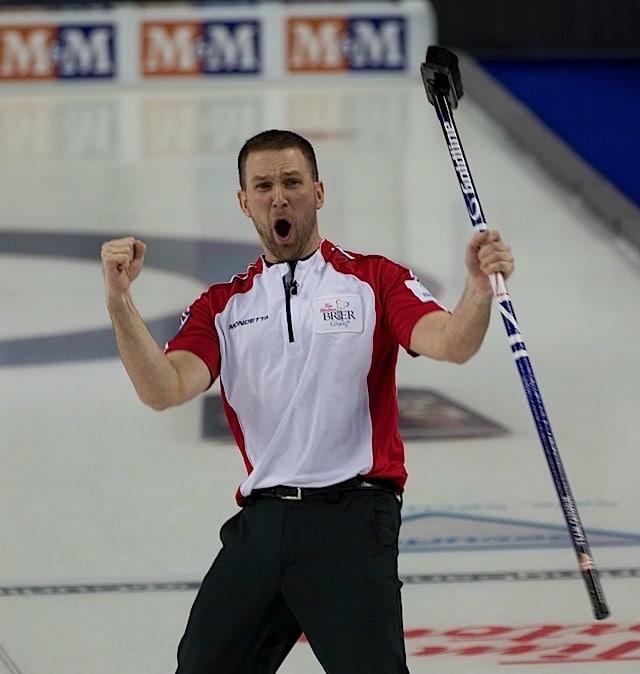 John Cullen: That shot was so interesting too, because of those implications. I just remember seeing Team Koe’s faces, and it was this bizarre mixture of disappointment, but also like, extreme respect for the shot you had made. BG: I think part of it too was just shock. I know we were shocked. Not a lot of people even thought the shot was there. JC: It actually went out pretty easy in retrospect. BG: Yeah, that surprised me too. I don’t throw it the hardest in the world, but it did spring out pretty easily in the end. But yeah, huge shot, huge amount of difficulty, and to be honest, we thought we let the game slip away. We had played a great game and a horrible 10th end, and we thought we let it get away from us. But we made that shot, and looking back, seeing the excitement and also the shock on our faces too is kind of nice to see when you look back on it. 2. Who could you take in a fight? BG: I think I could take just about any women’s player out there. (laughs) Am I allowed to say that? [laughs] JC: [laughs] I’m not sure, maybe there’s someone who will take you up on it. [laughs] BG: [laughs] I just don’t know, I’m not a big fighter so to pick out a guy is tough to say. You know what, I’ll say Brett Gallant. That’s my answer for sure. JC: A lot of guys do pick on their own teammates in this question. Why Brett? BG: I just think he’s a bit soft. [laughs] I’ve seen him in the gym and being around him a lot, I’m pretty sure I can handle him. 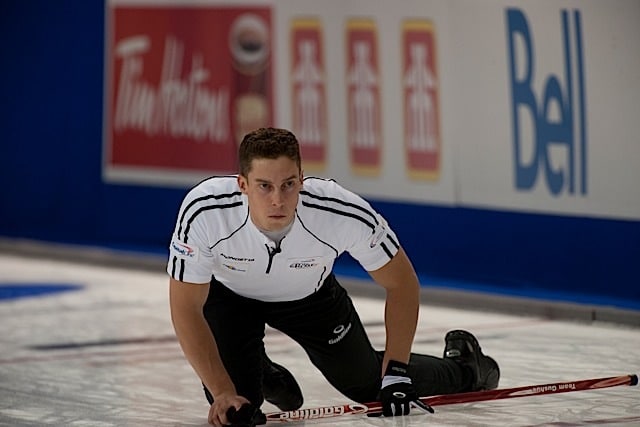 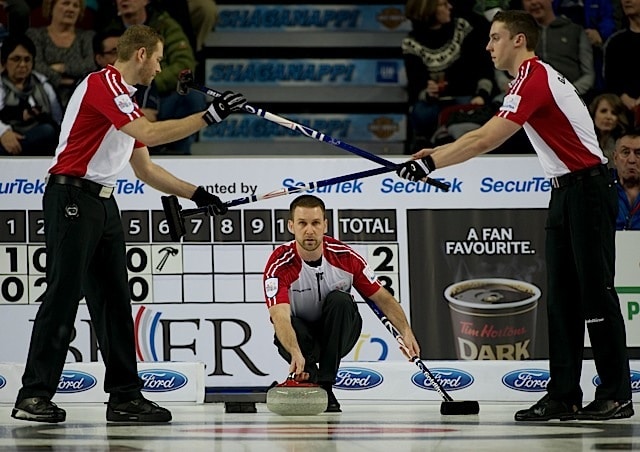 7. We’ll all look back and remember you guys were the ones who started it, which is pretty crazy. Now, let’s be a bit less serious and chat about something I’ve noticed the last few seasons. You’re getting to be one of the wily old veterans on tour now, and with that comes the attention of, well…a certain age group of ladies. How does it feel to have your poster up in many assisted living centres across the country? BG: [laughs] Yeah, I guess that’s true that’s probably happening right now. I think it’s that way for two reasons. I think first, when we first came on tour, that group of ladies that supported us was motherly age, like in their 50s, and so now it just follows that they’re of a bit of an advanced age and like us. I think the big thing was when I called home during the Olympics. I won and I wanted to call my mom, and I think the older ladies loved that move. [laughs] JC: [laughs] Oh, so it was a move, a ploy to get the 50 year-olds after you? [laughs] BG: [laughs] No, no, it wasn’t a move, obviously I wanted to talk to my mom and my first instinct was to call her after we won because she was supposed to be in Italy and couldn’t be there. So people liked that, and really since 2006, we’ve had that following. It’s really nice, I get messages almost every day on Facebook, Twitter, e-mail, from people who support us, and it means a lot. And obviously people around our team are starting to see that following too. JC: It’s funny calling that a move because I think it would have the opposite effect on a younger lady in a bar. “Hold on, I just have to call my mom here.” BG: [laughs] Yeah, calling your mom isn’t a bar move. I actually thought of doing it after the seventh end (in the 2006 Olympic gold-medal game), we had kinda gotten control of the game and so I asked our fifth if he could grab my phone for me so I could call her right away. It was what I wanted to do, and it meant a lot to our family, and it’s a great memory for me. I think people respected that. (See the clip here: https://www.cbc.ca/news/canada/newfoundland-labrador/team-gushue-s-olympic-win-10-years-ago-1.3463417) 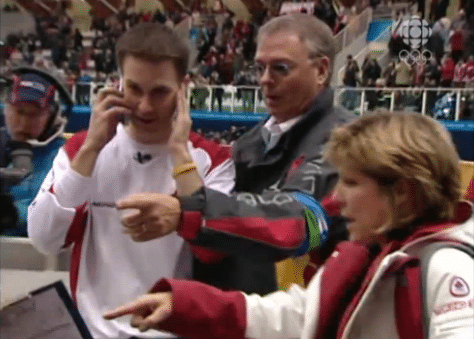 “Mom, pick up the phone…” Moments after winning the gold medal at the Winter Olympics in Torino, Italy, skip Brad Gushue tries to connect with his mom back home in Newfoundland. (Screenshot from CBC.ca)

8. Awesome. And now the last question comes in from world junior champion Mary Fay. What’s one of the funniest moments you’ve ever shared with your team? BG: There are lots, but one that sticks out I’d probably have to go back to the Olympics for. We were just about to go out after a game we lost in the round robin, I think to Finland, and our coach didn’t do it on purpose, but Toby MacDonald got the boys going pretty good. We were in the dressing room before the game, and the team was down a bit after our loss, and so he’s suiting up. It was cold in the arena so he put on some long johns, a shirt, a sweater, a jacket, his shoes, and then he walked out the door into the arena. [laughs] He totally didn’t put on his pants. He had this pair of old, tighty-whitey long johns, and just walked out. It was hilarious. JC: [laughs] That’s unreal. How long was he out there for? Did he actually make it out into the arena before someone noticed? BG: You know, I still to this day have no idea where he went, but he disappeared for a good two minutes and then came back in to us howling with laughter like, “you bastards!” It really loosened the guys up though, and it helped us get ready for the next game. JC: It almost sounds like he might’ve done this on purpose. BG: Toby was an awesome coach and he had a reputation of doing things like that as a coach where you were never really sure if it was an honest blunder or he was trying to motivate you. I’d like to believe this was an honest mistake because it’s way funnier that way, but with him, you could never tell. JC: Awesome. And now lastly, could I have a question for the next person I interview? BG: Certainly! Let’s go with, what is your biggest disappointment in your curling career so far? JC: WOW. Bringing the heat, Brad. BG: I’m sure lots of people ask nice questions, we might as well put someone on the hot seat here. [laughs] I’m curious to see what they say. JC: Fantastic, that way I don’t have to ask it. Really appreciate this Brad, and best of luck in the last Grand Slam of the season! 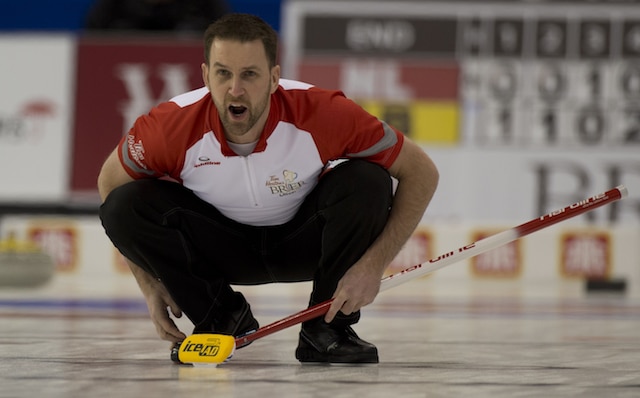