Another banner season for Canadian curling

Canadian teams at all levels once again were world-beaters during the 2015-16 curling season, which officially wrapped up this past weekend. 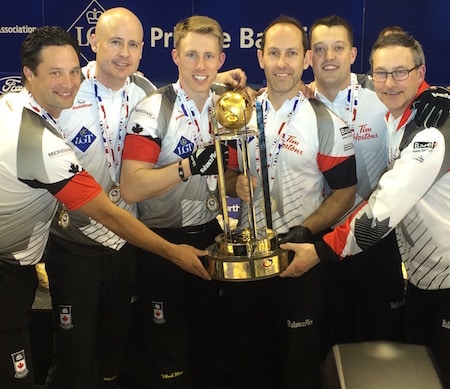 There were 10 major international championships contested during the past season — nine world championships in addition to the Youth Winter Olympics — and Canadian teams posted minimum top-five performances in nine of them, a claim no other country can make. The United States and Switzerland came next with six top-five placings, followed by Russia and Norway with five apiece. Canada also led the world in podium finishes with five, including three gold medals — two from teams skipped by Nova Scotia’s Mary Fay (at the Youth Olympics in Lillehammer, Norway, as well as the VoIP World Junior Championships in Taarnby, Denmark) and another from Calgary’s Kevin Koe at the 2016 World Men’s Championship, presented by Ford of Canada, in Basel, Switzerland. “Our national teams represented us with class and skill, and it was a thrill to watch them perform on the international stage this season,” said Hugh Avery, Chair of the Curling Canada Board of Governors. “Our Director, High Performance, Gerry Peckham, and his entire team of coaches and performance consultants need to take a bow for the way they prepared our teams to wear the Maple Leaf. We all know Canadian teams have targets on their back when they play in world events, and they handle the high expectations of Canadian fans extremely well, on and off the ice.” 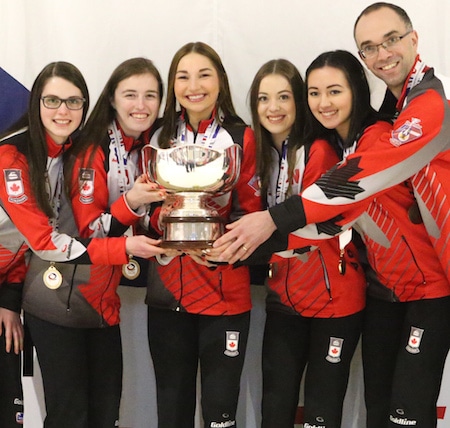 Other Canadian podium finishes included Randy Neufeld and his team from La Salle, Man., earning silver at the World Senior Men’s Championship in Karlstad, Sweden, while Matt Dunstone’s Winnipeg team won the men’s bronze medal at the VoIP World Juniors in Taarnby, Denmark. One of the most clutch performances of the season was turned in by the Saskatoon pairing of Marliese Kasner and Dustin Kalthoff at the 2016 World Mixed Doubles Championship in Karlstad. Kasner and Kalthoff went 9-1 to finish fifth in the 42-team field and earn eight crucial qualifying points to help Canada’s bid to qualify for the 2018 Winter Olympics in PyeongChang, South Korea, where mixed doubles curling will make its debut as an Olympic medal sport. Other Canadian international results included Chelsea Carey’s Calgary team finishing fourth at the Ford World Women’s Championship in Swift Current, Sask.; Calgary’s Terri Loblaw was tied for fifth at the World Senior Women’s Championship in Karlstad; Swift Current’s Max Kirkpatrick tied for fifth at the inaugural World Mixed Curling Championship in Berne, Switzerland; and Jim Armstrong of Cambridge, Ont., and the national wheelchair team finished seventh at the World Wheelchair Championship in Lucerne, Switzerland. The 2015-16 season also saw the race to represent Canada in four-player curling at the 2018 Olympics heat up in a big way. Three teams clinched berths into the 2017 Tim Hortons Roar of the Rings Canadian Curling Trials, which are set for Dec. 2-10 at the Canadian Tire Centre in Ottawa. 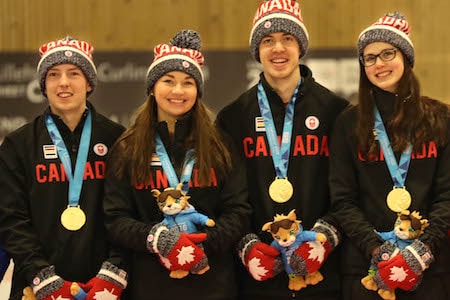 On the men’s side, Team Kevin Koe booked its trip to Ottawa by winning at the 2015 Home Hardware Canada Cup in Grande Prairie, Alta., while two women’s teams have earned Trials berths: Ottawa’s Rachel Homan, by virtue of winning at the 2015 Home Hardware Canada Cup, and reigning Olympic gold-medallist Jennifer Jones of Winnipeg. Jones earns the berth vacated by Scotties Tournament of Hearts champion Chelsea Carey, who fell just short of clinching a berth by finishing fourth at the Ford Worlds. A Trials berth goes to the winners of the Scotties and the Tim Hortons Brier if they follow up by winning a world championship medal. If the team doesn’t medal at the worlds, the berth goes to the highest non-qualified team on that season’s Canadian Team Ranking System, which is Team Jones. Koe, meanwhile, qualified for the Tim Hortons Roar of the Rings twice: by winning the Home Hardware Canada Cup and then by winning gold at both the Tim Hortons Brier in Ottawa and the World Championship in Switzerland. His second berth will now go to the highest non-qualified team on the 2016-17 CTRS standings. While the 2015-16 season is barely over, preparations are already underway for the 2016-17 season. The 2016 World Mixed (four player) Championship is set for Oct. 15-22 in Kazan, Russia, with Team Mick Lizmore of Edmonton, the 2016 Canadian mixed champ, wearing Canadian colours. Domestically, Curling Canada’s 2016-17 Season of Champions series will kick off with the 2016 Home Hardware Canada Cup, Nov. 30-Dec. 4 at Westman Communications Group Place in Brandon, Man., where two more berths into the Tim Hortons Roar of the Rings will be up for grabs. The Season of Champions will continue with the 2017 World Financial Group Continental Cup, presented by Boyd Gaming, Jan. 12-15 at Orleans Arena in Las Vegas, followed by the 2017 Canadian Juniors, Jan. 21-29 at the Archie Browning Sports Centre in Victoria. The 2017 Scotties Tournament of Hearts is set for Feb. 18-26 at the Meridian Centre in St. Catharines, Ont., with the 2017 Tim Hortons Brier going March 4-12 at Mile One Centre in St. John’s, N.L. The Season of Champions will conclude with the 2017 Ford World Men’s Curling Championship, April 1-9 at Rexall Place in Edmonton.

Tickets for all of the Season of Champions events are available at https://www.curling.ca/tickets/ Canada will play host to two more world championships to close out the season: the 2017 World Mixed Doubles and 2017 World Senior Men’s and Women’s Championships. The events will run concurrently, April 22-29 at the Crossings Ice Complex in Lethbridge, Alta.