OTTAWA – The World Curling Federation (WCF) and the National Research Council (NRC), Canada’s “go-to” research and technology organization, are investigating the effects of curling brush head technology on ice surfaces and their potential effects on where stones come to rest. 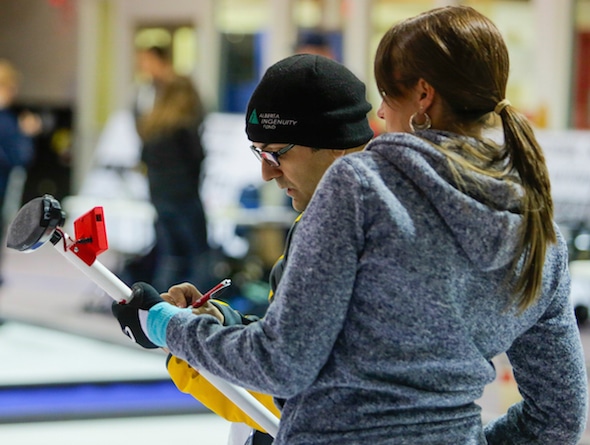 During the 2015-2016 season, a series of moratoriums were placed on certain brushes due to their perceived effects on the ice surface and trajectory of the stone. During three days of testing, the National Research Council’s ice and materials technologies experts are providing on-site analysis of various manufacturers’ broom heads. The tests are assessing respective changes in the distance, path, speed, acceleration, and rotation of a stone as it travels down a sheet of ice. “We have a long history of supporting Canada’s Olympic summer and winter athletes,” says Dr. Duncan Stewart, General Manager of Security and Disruptive Technologies at the National Research Council of Canada. “Curling brooms are rapidly becoming high-tech, and we are pleased to be working with the World Curling Federation to evaluate curling equipment technologies and enable well-informed decisions by the sport governing body.” Results from the testing will allow the World Curling Federation to make informed decisions about possible new regulations on the use of engineered brush heads for the upcoming curling season. “Through the rigorous testing taking place this week, we hope to formulate a set of policies and rules pertaining to brush head technology and sweeping techniques, which will be presented to our Member Associations for ratification,” says Kate Caithness, President of the World Curling Federation. “The plan is to have all this accomplished before the start of the 2016-2017 season.” Through a process involving international athletes, sport experts, ice professionals and other important stakeholders, new regulations will be proposed for approval by WCF Members at the WCF’s Annual General Assembly, to be held in September 2016 in Stockholm, Sweden.