World and Canadian champions, along with Olympic gold-medallists, will be heading to Brandon, Man., next December for the 2016 Home Hardware Canada Cup, it was announced today by Curling Canada. 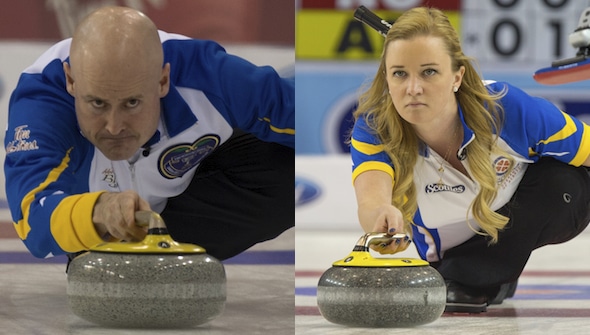 The annual clash of Canada’s top seven men’s and top seven women’s curling teams is scheduled for Nov. 30-Dec. 4 at Westman Communications Group Place at the Keystone Centre in Brandon, and not only will offer a $140,000 purse, it will have up for grabs direct-entry berths into the 2017 Tim Hortons Roar of the Rings Canadian Curling Trials in Ottawa. That’s the event that will decide Canada’s four-player teams for the 2018 Winter Olympics in PyeongChang, South Korea.

The Home Hardware Canada Cup is the opening event of Curling Canada’s 2016-17 Season of Champions series, and it will feature the reigning champions of the 2016 Tim Hortons Brier (Team Kevin Koe of Calgary) and the 2016 Scotties Tournament of Hearts (Team Chelsea Carey of Calgary).

Additionally, the next six highest-ranked teams in the 2015-16 Canadian Team Ranking System standings qualified to play off for big money and the potential of Olympic glory.

Not only do the winning teams qualify for the Tim Hortons Roar of the Rings, they also qualify to be part of Team North America at the 2017 World Financial Group Continental Cup, presented by Boyd Gaming, Jan. 12-15 in Las Vegas.

Koe’s team is coming off a sensational 2015-16 season that saw it capture the 2015 Home Hardware Canada Cup in Grande Prairie, Alta., to earn the first men’s berth into the Tim Hortons Roar of the Rings. It followed up by capturing the Tim Hortons Brier in Ottawa and the World Men’s Curling Championship, presented by Ford of Canada, in Basel, Switzerland.

On the women’s side, Team Carey will be pushed hard, as the field includes 2015-16 CTRS champ and defending Home Hardware Canada Cup champ Team Rachel Homan of Ottawa, along with 2014 Olympic gold-medallist and 2015 Scotties champ Team Jennifer Jones of Winnipeg. The Homan and Jones teams already have Trials berths nailed down.

In addition to the Trials and WFG Continental Cup berths, the winning men’s and women’s teams each will take home the winner’s cheque of $14,000, complemented by $2,000 for each of their round-robin wins.

The teams will play a single round-robin draw, with the top three teams advancing to the playoffs. The first-place team in the round-robin will advance directly to the championship final, while the second- and third-place teams will meet in the semifinal.

To purchase tickets for the 2016 Home Hardware Canada Cup of Curling, go to https://www.curling.ca/2016canadacup/tickets/

Additionally, volunteer opportunities are now available. To find out more, go to https://www.curling.ca/2016canadacup/volunteer/