Dreaming big, on and off the ice

(Story by Cathlia Ward) At just 18 years of age, Mary Fay has quickly risen to Canadian and world curling stardom. The Chester, N.S., native captured the 2016 Youth Olympic gold medal, the 2016 Canadian Junior Championship and the 2016 Junior World Championship all in the span of about a month and a half. Pretty crazy for a grade 12 student, right? 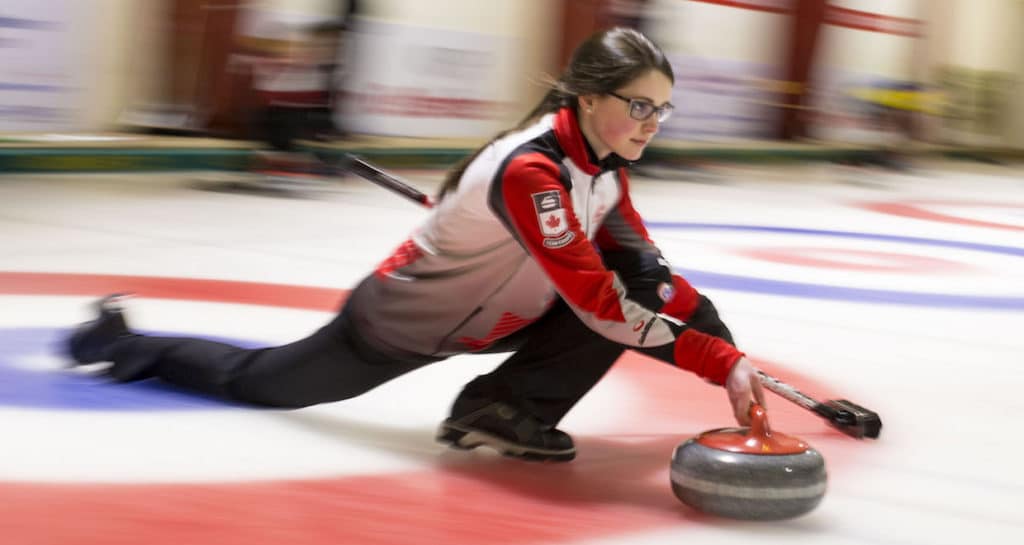 “You can do anything if you put the work in,” says Nova Scotia’s Mary Fay, who is stepping away from curling to pursue studies at Queen’s University with the goal of becoming a doctor (WCF/Marissa Tiel photo)

“(Curling) has made the past 10 years so enjoyable and I wouldn’t change a thing,” Fay says now, after what many would consider a dream curling season. “Curling has just given me so much that I could never give all of that back. It’s such an amazing sport, and I don’t think people really realize that. It’s been amazing.” However, even though curling has played a huge role in her life since the age of eight, Fay has many big dreams, both on and off the ice, and she has decided to pursue some opportunities outside of the curling rink this coming Fall. “I initially thought I would end up going to Dal (Dalhousie University in Halifax) and stay close to home, but then I found out I had been offered a really good scholarship to Queen’s, so I started to consider it again,” she says. “The more I thought about it, I felt that Queen’s was the right fit. I honestly only decided a few weeks ago, it was pretty last-minute.” Fay will be moving to Kingston, Ont., this September to pursue a Bachelor of Science degree, hoping to transfer into the Life Sciences program, because for her, a young woman who pushes for excellence in everything she does, being a medical doctor is the eventual career dream. 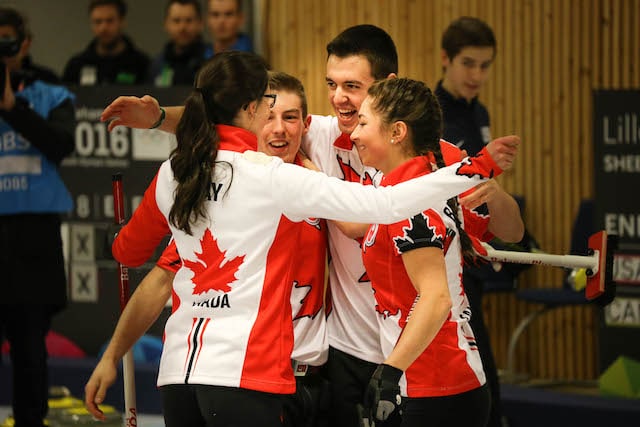 This constant search for excellence means that curling will have to take a back seat for now. “It’ll be weird, because I played for so long,” she says. “Throughout the year, I wasn’t thinking much about next year because I was so busy. But when I got back from Worlds I realized how much I had missed in school and going forward I just realized that my commitment level was different than my teammates’ and I felt like they deserved a teammate who could commit fully to curling. This year showed me that it takes a lot to get to that level and I think that my team needs to be able to build towards their goals and I don’t think I can commit to everything they need to reach them.” 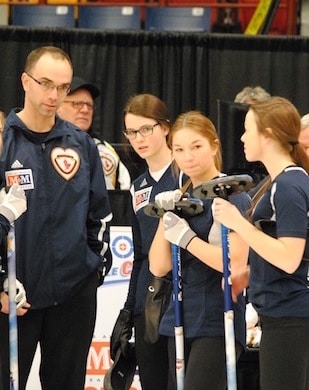 “He has spent a lot of time with me over the years and he has taught me so much,” says Mary Fay about her long-time coach, Andrew Atherton. (Curling Canada/Amanda Rumboldt photo)

Fay is still in awe of the curling career she has had and can’t imagine the kind of person she would be today without the sport along the way. She credits incredible coaching, and the sisterhood within her team for much of her success. “Andrew (Atherton) coached me right from the start, since I was eight, so that’s 10 years now that he’s been there,” she says. “He has spent a lot of time with me over the years and he has taught me so much. I mean you don’t get to that level without someone that dedicated. He always had really high expectations and always pushed us, and I think that’s why we were able to learn so much and get to that level.” Tough as it may be for Fay to take a step back from competitive play for a little while, you can bet the new Team Clarke has no bigger fan than their former skipper. “I’ll definitely be following and cheering them on. They are honestly, so good and such great girls.” 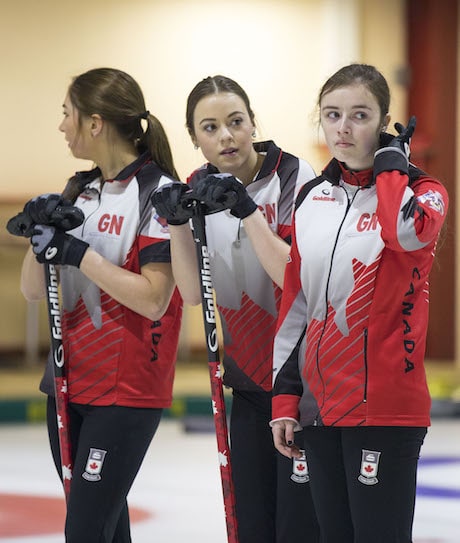 Fay says it is the friendship off the ice with the girls that in many ways she will miss the most. “Karlee (Burgess) and I have done a lot together, so it’s gonna be very weird not spending every weekend together. She’s got a really good sense of humour and she’s a lot of fun to be around,” says Fay about her former second. “Janique (LeBlanc, lead) is probably the easy-going, fun-loving one and she’s always gonna have a smile on her face no matter what the situation. You could always count on her. Kristen (Clarke, third on Team Fay) was a huge addition to our team and now she has so much potential as a skip. She is so smart, on and off the ice, and she has a really good sense of the game. She always gave really great feedback. Having her to chat with in the house was just awesome because I always could trust her feedback, so it made it easy, once we called a shot, to feel confident.” So for now, Fay is bidding adieu to competitive curling, knowing the curling community will welcome her with open arms should she decide to return. “One of the reasons I feel so certain I want to go into medicine, is because of curling,” she says. “Through competing and meeting new people, I’ve learned so much. Learning how to perform under pressure, that’s been huge because now I know that I can do it. I can look back on that last rock to win the Canadian Juniors and know I have it in me. Also, time management (during) this past year has been huge. I can’t imagine ever having a crazier year in my life. So I have all these experiences in my back pocket.” 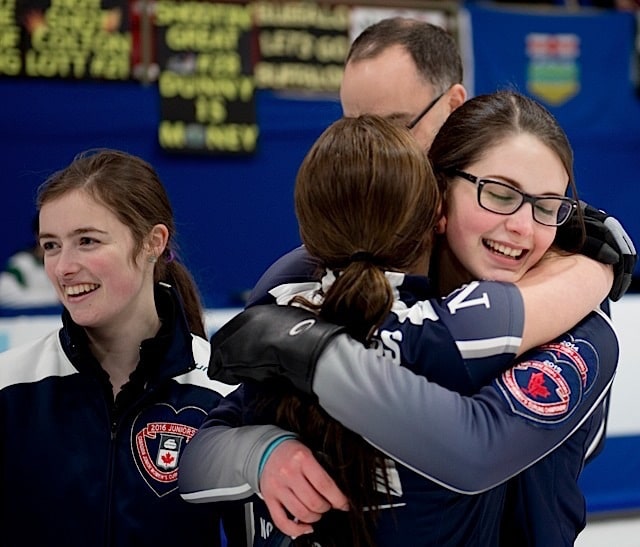 A celebratory hug with Karlee Burgess: “Karlee and I have done a lot together, so it’s gonna be very weird not spending every weekend together,” says Fay about her long-time second, who shared in victories at the Canadian and World Juniors as well as at the Youth Olympics in Norway (Curling Canada/Michael Burns photo)

To all young curlers and young athletes looking to push the boundaries of perfection, in whatever it is they are passionate about, Fay’s best advice is that anything is possible with a lot of hard work. “You really have to do what you think is right and go with your gut, and once you make that decision you need to work really hard,” says the 2016 Youth Olympic, Canadian and World champion. “You can do anything if you put the work in. Take any opportunity you can get, because if you decide something is just too hard, you’ll miss out. Be in the moment, enjoy all the little things along the way because that’s what you’ll remember. That’s what I will remember, anyways.” 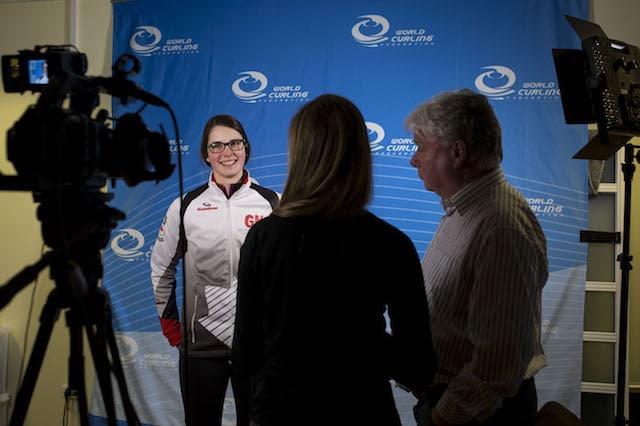