Curling Night at the Ballpark in Winnipeg

(Courtesy, CurlManitoba) It was the baseball version of a draw to the button ‚ a strike across the corner of the plate! The pitcher was two-time Manitoba and Canadian junior men’s curling champion Matt Dunstone, also a two-time Manitoba youth baseball champion, with the ceremonial opening pitch on Curling Night at the Goldeyes this past Tuesday in Winnipeg.

Dunstone, a former Winnipeg Goldeyes batboy, said he had often dreamed about playing for the local independent league professional team and advancing in a career in baseball. However, after winning a pair of Manitoba and Canadian junior curling championships and a pair of world bronze medals, Dunstone says his sports dream is now more focused on curling and the possibilities of the Olympics. Dunstone was invited to throw the opening pitch by CurlManitoba on an evening designed to remind fans about the upcoming curling season as well as to introduce the sport to a new audience. The event provided visibility for Curling Canada’s Home Hardware Canada Cup (Brandon, Nov. 30-Dec. 4, 2016), CurlManitoba’s Scotties Tournament of Hearts presented by Monsanto (Charleswood, Jan. 24-29, 2017), and CurlManitoba’s Viterra Men’s Championship (Portage, Feb. 7-12, 2017). Eight Winnipeg curling clubs took advantage of the opportunity to meet with current and potential members. The Manitoba Curling Hall of Fame & Museum promoted its plans for a virtual curling museum and CurlManitoba’s Development Department had Curling Canada Rocks & Rings street curling on hand, providing great exposure to curling for youngsters at the ball game. 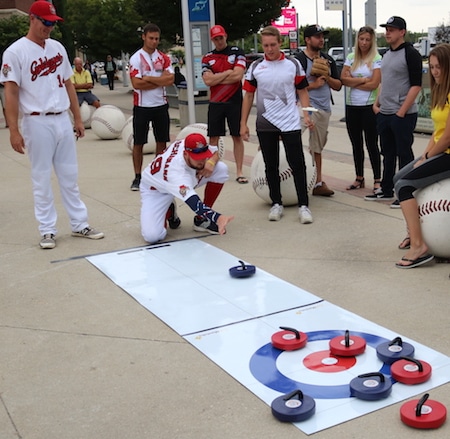 CurlManitoba Executive Director Craig Baker declared the first time initiative a success. “One of CurlManitoba’s roles is to work with our member clubs and our event committees to draw attention to this great sport. It is important to break from traditional patterns and find new ways to present curling’s message,” he said. “What better way than to spend an evening at the ballpark, talking with baseball fans about curling?”