Team World will be hungrier than ever when it takes to the ice at Orleans Arena in Las Vegas next January for the 2017 World Financial Group Continental Cup, presented by Boyd Gaming. 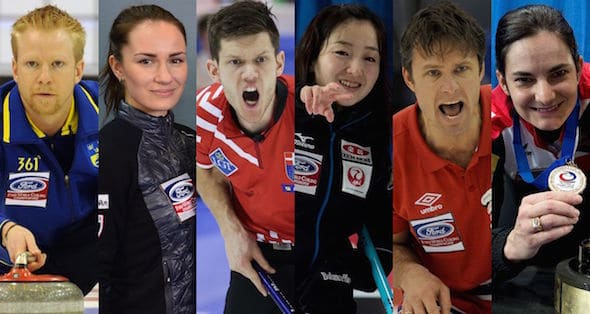 The overseas contingent will be looking to snap a four-year losing streak against Team North America when curling’s version of the Ryder Cup is contested over four days, Jan. 12-15, in the Entertainment Capital of the World.

“We’ve been extremely fortunate over the past four years because that World team always has a lot of talent, but we’ve been able to rise to the occasion,” said reigning world men’s champion Kevin Koe of Calgary, whose team was a member of last season’s victorious Team North America squad in Las Vegas. “We see those teams throughout the season, and we know how much this event means to them, and we also know that we’ll have to be at the absolute top of our games next January in Las Vegas if we want to make it five in a row.”

The four-day competition features three unique styles of curling competition (traditional team, skins, mixed doubles). Each segment awards points for wins (or ties). A total of 60 points are available, meaning the side that earns 30.5 points or more will be declared the champion.

Team World’s lineup has now been confirmed, with coach Pål Trulsen of Norway and captain Andy Kapp of Germany bringing four of last season’s six world championship podium teams to Las Vegas in a bid to take the trophy off of North American soil for the first time since 2012 in Langley, B.C.

All three medal-winning teams from the 2016 Ford World Women’s Championship last spring in Swift Current, Sask., will be in Las Vegas, headed by two-time world champ Binia Feltscher of Switzerland, who won her second gold medal in Swift Current, beating Japan’s Satsuki Fujisawa in the championship game. Russia’s Anna Sidorova, the bronze-medallist in Swift Current, will round out the Team World women’s contingent.

On the men’s side, Sweden’s Niklas Edin, the 2015 world champ, will be making his ninth appearance at the World Financial Group Continental Cup, while 2014 world champ Thomas Ulsrud of Norway is preparing for his eighth trip to the event. On the other hand, Denmark’s Rasmus Stjerne, who won silver at the 2016 World Men’s Championship, presented by Ford of Canada, last April in Basel, Switzerland, after losing to Koe’s Canadian team in the final, will be making his debut at the World Financial Group Continental Cup.

“We really can’t wait to get back to Las Vegas and show the fans what we’re capable of,” said Edin. “We have a ton of respect for the North American teams, obviously, and they’ve been deserving of their success at the WFG Continental Cup. But we also know that the World teams, when we’re on top of our game, can be just as good. I know all six of our teams coming to Las Vegas are excited because it’s such a great show, but also we are extremely hungry and focused on winning that trophy.”

“What a true honour this will be, wearing the Stars, Stripes and Maple Leaf as the Team Captain for the 2017 World Financial Group Continental Cup,” said McCormick, a four-time Olympian who also skipped the U.S. to gold at the 2003 world championship in Winnipeg. “My focus is to make this opportunity extraordinary for the athletes of Team North America assist them in finding success and enjoyment on and off the Ice. This is a new and exciting role for me, one I will embrace and give 100 per cent, guaranteed.  Since it’s in Las Vegas, you can bet on that!”

Already qualified for Team North America are the reigning Canadian champions — Koe, who won the 2016 Tim Hortons Brier, and fellow Calgarian Chelsea Carey, whose team prevailed at the 2016 Scotties Tournament of Hearts.

The other two Canadian teams will be the men’s and women’s champions of the 2016 Home Hardware Canada Cup, Nov. 30-Dec. 4 in Brandon. ().

The two U.S. entries will be decided based on World Curling Tour results through Nov. 22 (click here for information

“I know our teams will be ready to play in Las Vegas, and they’ll have to be because Team World is tired of losing, and they’ll be extremely eager to end that streak,” said Lang. “I’m thrilled to be working with Debbie, and we’ll be trying our best to keep the Cup here in North America.”

The 2016 edition was the closest in event history, with Team North America prevailing by just a single point.

“What a battle last year! Only an inch was missing to get the pot on the right side of the oceans,” said Kapp. “But Team World 2017 will be ready with all its experience and pumped up with its fresh blood to make Orleans Arena the hottest place where curling will be played next season. Hot, hotter, Las Vegas . . . watch out for fire alarm!”

Projections for the 2017 event indicate more attendance records could be attainable.

“Team World’s star-studded roster shows they’re all-in to win,” said Jon Killoran, event manager of the 2017 WFG Continental Cup. “So far, nearly 4,000 fans are also all-in, having purchased full-event packages. But we still have plenty of great seats available and a city waiting to entertain curling fans like no other!”

Ticket information is available at https://www.curling.ca/2017continentalcup/tickets/.