This week, John sits down with Steve Laycock, the three-time defending Saskatchewan champion, a Brier bronze medallist, and a former World Junior champion. Steve’s team is ranked 7th on the World Curling Tour Order of Merit heading into the season and will be one of the teams competing at the Canada Cup. Welcome to Magical Question Fun Time, the Curling Canada feature where comedian John Cullen sits down with your favourite curlers for interviews like you have never seen. Each interview will feature eight questions: five standard questions that will be asked to each curler, two questions specific to that curler, and one question that the curler interviewed before them asks. 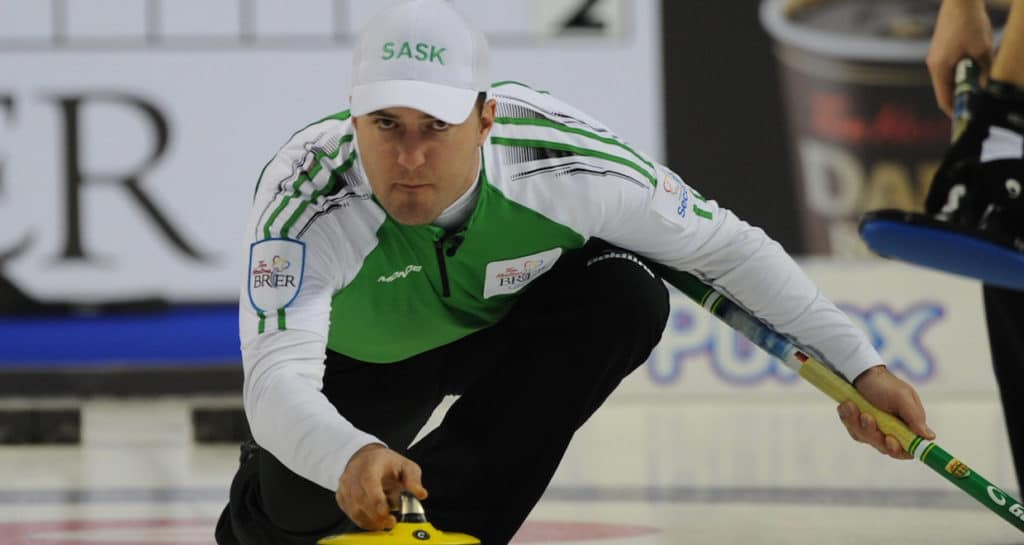 1. What’s the nicest shot you’ve ever been a part of? Steve Laycock: I’m going to go way back with this one. When I was 18, we went out of province for the first time to play a spiel in Brandon, Manitoba. Mike McEwen’s team used to run a junior spiel out of there and we were playing Daley Peters in the playoffs. We had hammer tied up coming home, and I made a draw through a port and around a rock on the top of the button to catch the back of the button to win. John Cullen: That sounds intense. How small was the port? SL: Let’s just say we had already hit the auto-start on the car before I went to throw it. JC: [laughs] And playing Daley Peters, I can’t imagine he was too happy. SL: [laughs] I don’t think he was too pleased, no. Let’s put it this way: his family apologized to me after the game. [laughs] JC: [laughs] Oh my god. That’s amazing. It sounds like a nice shot but you’ve done a lot in your career, what makes that one stick out? SL: Well, we made that shot in what was I think the quarters, and then we ended up going on to beat Mike McEwen in the final. It was sort of the first time where I really felt like we could hang with the bigger teams, and gave me a ton of confidence going forward. I don’t think we would’ve ended up winning the Worlds if it hadn’t been for that tournament. 2. Who could you take in a fight? SL: I think quite a few people actually, my old man strength is starting to set in. [laughs] I wouldn’t actually want to fight anyone, but I’m not afraid of it, let’s say. JC: I could see that, and you have kids too, so you got the dad strength as well. SL: I’m just terrified of being hit in the kidneys. [laughs] I don’t know what it is, but that kidney shot would get me every time. JC: What about your own team? I have a feeling you could have some good scraps with them. SL: I’ll say this: I think the guys were pretty surprised when we first started playing together that I could lift more than them. It’s actually a running joke on our team that the old man strength is working for me there too. As far as me beating my teammates in a scrap, I’m not gonna name names but let’s say there’s two for sure I can, and one for sure I can’t. [laughs] 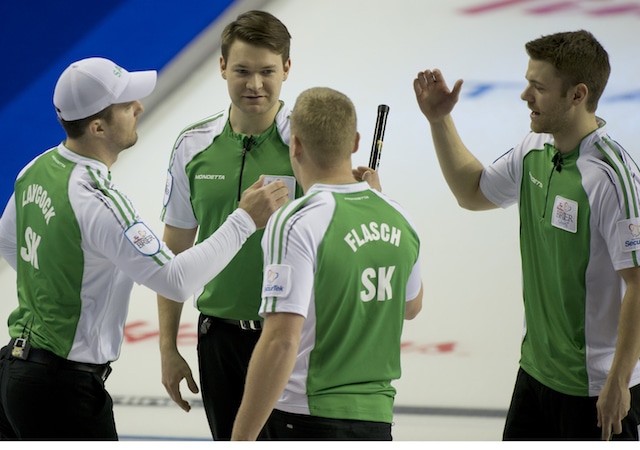 3. If a deli named a sandwich after you, what would be on it? SL: The most important topping for me is mayo, I’m a big mayo fan. Throw a couple of proteins on there, maybe some rib, some chicken, and just traditional veggies. But gotta have the mayo. JC: Were you ever a guy who would eat just a mayo sandwich? I knew kids that did that. SL: No, never just mayo. Growing up on a farm at the end of the summer when the tomatoes got ripe, we would do a tomato sandwich, but the tomato was just there for appearances. We needed the mayo on there. And we can call my sandwich the Mayowich. No messing around. [laughs] 4. What’s the worst job you’ve ever had? SL: This isn’t a job that I ended up taking, but the worst job interview I ever had was for a company here in Saskatchewan that sold coupon books door-to-door. I went in for the interview and they told me I was going to go out on trial to see if I liked the job. I figured, okay, head out for a couple of hours, no big deal. We drove two towns over and I was made to follow this guy for eight hours selling these coupon books. JC: So they didn’t tell you it was going to be all day? SL: Nope, we started driving and I was thinking, “man, we’re going pretty far here”, and then I just shadowed this guy for an entire day. JC: That sounds horrific. Did you turn down the job right away? SL: Well, I felt like it was pretty clear I hated it the whole time and at the end the guy was like, “you seem like a fit” and I chose not to say no there, but I didn’t answer their calls after. I worked property management a few years after and saw that the (coupon) business had been foreclosed on. Maybe it was because they couldn’t hire anyone after eight-hour job interviews. [laughs] 5. What’s a stupid thing you incorrectly believed was true for a long time? SL: We had a huge argument on our team. We went to Scotland for a curling tournament and went a bit early to a New Year’s party in Edinburgh, and “Locked Out of Heaven” by Bruno Mars came on. I was sure that at one point I saw that the song was written by The Police. I bet the guys $17 million… JC: Wait, $17 million? SL: I’ll get to that. [laughs] So yeah, $17 million and Google proved I was wrong. I’ve never been able to live that down, I normally dominate the boys with trivia type stuff and I felt horrible getting that one wrong. JC: So the $17 million? SL: Yeah, we bet on the team all the time, but it’s just joking bets, nothing ever serious. How much you bet is always a number huge enough that you’d never be expected to pay it, and then how much the number is expresses your confidence in your answer. I’m either so right they’ll never want to bet against me, or if I’m wrong, I never have to pay. [laughs] JC: But technically you owe your team $17 million. SL: [laughs] Technically yes, but I’ll never buy a lottery ticket for that reason. I’ll feel like I have to pay the guys the $17 million if I win. In fact, don’t print that, I don’t want this to be legal documentation in case I do win. [laughs] 6. Now we’re on to the Steve Laycock questions and I have to ask about your last name—is it the best or the worst? SL: I’m going to say best. It’s a built-in nickname when you’re a kid, and then as an adult, people tend to love it. Plus, we’ve been fortunate enough to play on TV quite a bit and you’re forcing commentators to say it an awful lot. [laughs] JC: [laughs] That’s super true. I’ve already typed it several times. Did you ever get teased really badly? SL: Honestly, nothing outside of the super obvious. I can’t remember any specific times where it really got to me. In the curling world, it’s definitely never been an issue. 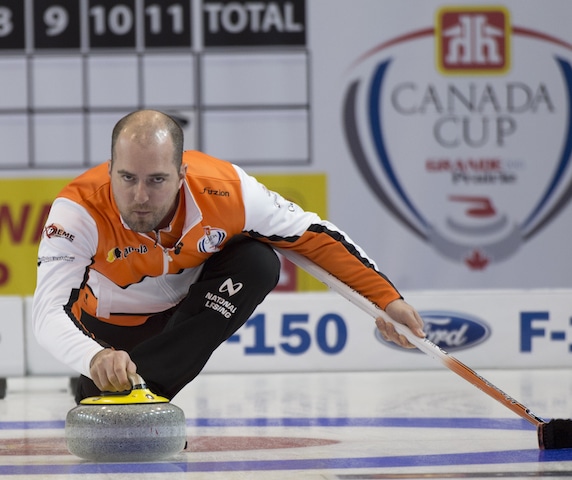 7. Now you are from the small town of Saltcoats, Saskatchewan (population: 474) and I heard a rumor that you are actually on the “Welcome to Saltcoats” sign. Is that true? SL: I am on the sign, that is true. They actually refurbished it when we won Worlds and they had a big ceremony and honoured both myself and Joan McCusker, who is also from Saltcoats. Though she has pointed out many times that she had to win a gold medal and three World Championships before she got her name on the sign and I just had to win the World Juniors. JC: [laughs] That’s awesome. It is pretty bad-ass to have your name on the sign though. Do you make sure to spend a little time with it every time you go back to Saltcoats? SL: Unfortunately I don’t see it that often anymore because my parents moved to Yorkton, I’m in Saskatoon, and my brother and sister live a few miles away but on the opposite side of town from the sign. I am quite proud of it, though. We’ve had a lot of good curlers from Saltcoats: Gerry Adam, Joan’s whole family, tons of provincial participants and winners. There’s been a lot of good curlers from Saltcoats, so it’s pretty cool. JC: Did you ever use it to pick up a lady? I feel like, “hey, that’s my name on the sign” is a pretty great pick-up line. SL: [laughs] It probably would be, but my wife and I have been together for so long that I was never really in a position to use it to my advantage. I just have friends who occasionally vandalize it and that’s about it. [laughs] 8. This question comes in from Dana Ferguson and she says that she feels like you are clearly a Starbucks guy and wants to know your Starbucks order. I say screw that question because I have a feeling you’re going to take umbrage with being called a Starbucks guy. SL: [laughs] I’m definitely not a Starbucks guy. Hot drinks are just not my thing at all. I think I’ve been to Starbucks once, maybe? Maybe a few times. I feel like she’s only asking me because she saw me in a Starbucks once. [laughs] If I’m there, I’ll usually get some kind of iced drink. That’s about it. JC: All right, thank you Steve and now if I could ask you for a question for my next interviewee please? SL: All right. In their curling career, which teammate has been most responsible for their success, and which teammate has been the biggest hinderance to their success? JC: [laughs] WOW really putting someone on blast here, Steve. What would be your answer? SL: A couple names come to mind as far as being responsible for my success. One is Chris Haichert. In juniors, he was someone who pushed me to be the best version of myself I could be. I didn’t always like him, but he pushed me, and I’ll always be grateful for that. And Pat Simmons, of course. We had been a good team for a while, but getting to play with Pat I saw what it meant to be a truly elite curler. 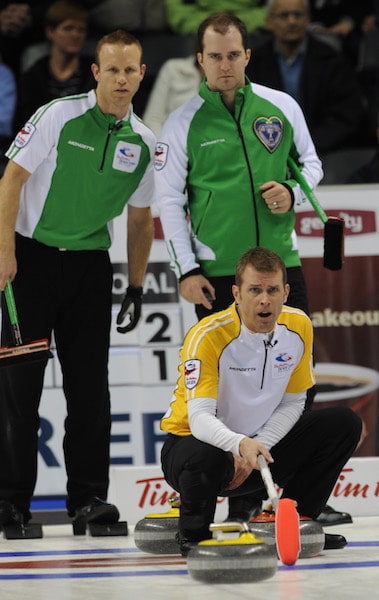 JC: As for the hinderance… SL: I asked the question so I wouldn’t have to answer it. [laughs] JC: Alright Steve, we’ll leave it there. Thanks for joining us on MQFT and best of luck this season!