It’s an ideal game plan — score big in the early ends — and it’s working out perfectly for Team Canada at the 2016 World Mixed Curling Championship in Kazan, Russia. 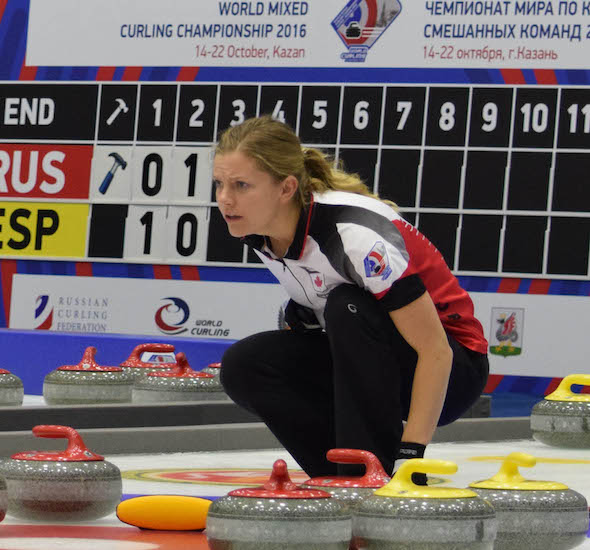 Saturday, Team Canada did it again, this time against France’s Stephane Vergnaud. Holding last-rock advantage, Canada took advantage of an early French miss and used a guard to perfection, making four perfect come-arounds, and when Vergnaud’s last-rock freeze managed to neutralize just one of Canada’s counting rocks, Lizmore made the open draw for four.

Canada wouldn’t look back, cruising home with a 9-2 triumph. The victory left Team Canada with a 2-0 record, tied for top spot in Pool D with Latvia’s Ansis Regza, an 11-1 victor over Andorra’s Josep Garcia (0-2).

After the big four, Canada was practically lights out the rest of the way; in the second, France was forced to hit for a single looking at two, and in the third, Lizmore had an open draw for three to extend the lead. A blanked fourth, followed by another force of a single for France in the fifth set the stage for Lizmore to salt away the victory with a draw for two in the sixth.

Canada is back on the ice Sunday at 9 a.m. ET against the Latvians.

A total of 37 teams, split into five round-robin pools, are contesting the 2016 World Mixed Curling Championship. The top three teams in each pool, plus the fourth-place team with the best Last-Shot Draw distance, will qualify for the playoffs.