Mick Lizmore’s Canadian team continues to be a pace-setter at the 2016 World Mixed Curling Championship in Kazan, Russia. 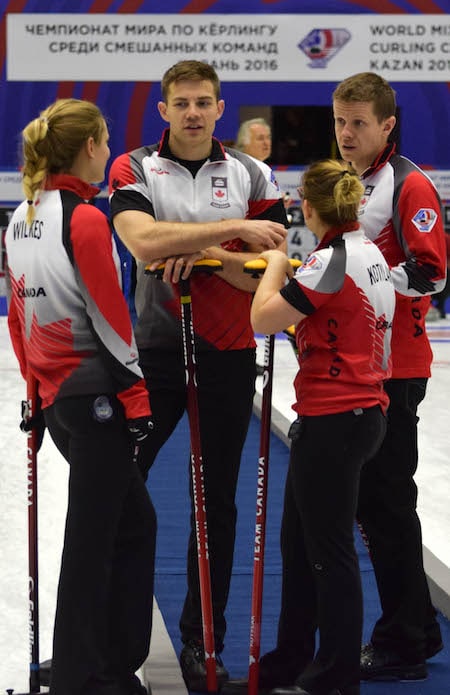 The Edmonton-based Lizmore squad — rounded out by third Sarah Wilkes, second Brad Thiessen, lead Alison Kotylak and coach Melissa Soligo — improved to 3-0 with a tidy 7-2 win over Latvia’s Ansis Regza in a battle of undefeated teams Sunday at the Kazan Sport Palace.

The victory left Canada leading its eight-team round-robin pool and in good position to qualify for the 16-team playoffs.

“We felt pretty good that game,” said Lizmore. “We weren’t really happy with how we played last night (in a 9-2 victory over Frances Stephane Vergnaud) so we’re glad to get back on track just feeling a lot better that game than we did yesterday.”

Once again, it was a big score early that set Canada in the right direction and deflated the opposition. With last-rock advantage, Lizmore made a delicate cross-face tap in a crowded house to score four.

But it was his shot in the second end — a steep-angle double takeout — that may have been the crusher for the Latvians, who had a multiple score lined up but had to settle for blanking the end.

In the third, Canada took advantage of a miss from Regza to steal a pair and take a 6-0 lead, more than enough to ensure the victory.

“I think we’re getting a few misses from the other teams early on and executing well in those first ends,” said Lizmore. “Sometimes you get a four or sometimes you end up forced or give up a steal, so I think we just caught a few breaks early on in those games and that was the result.”

Canada needs a top-three finish in its round-robin pool to nail down a playoff spot; the 37 teams in Kazan are split into five round-robin pools, and the 16th playoff team will be the fourth-place team from the five pools with the best pre-game Last Shot Draw distance.

But Team Canada is refusing to look beyond its next assignment — Monday at 9 a.m. ET against Andorra’s Josep Garcia (0-2).

“We’re just trying to deal with what’s important now — the next shot game, the next game,” said Lizmore. “Having a short-term focus and focusing on what we need to do heading into tomorrow rather than what we need to do over the course of the week. If we do that, I think things will take care of themselves and we’ll be in a position to compete at the end of the week.”