Team Canada skip Mick Lizmore survived some early pressure from Belgium to remain undefeated and close in on a playoff spot at the 2016 World Mixed Curling Championship in Kazan, Russia. Lizmore’s Edmonton team — rounded out by third Sarah Wilkes, second Brad Thiessen, lead Alison Kotylak and coach Melissa Soligo — got off to a rough start before taking four straight ends on the way to a 7-2 victory over Belgium’s Loes Willems (0-3) on Tuesday afternoon at the Kazan Sport Palace. 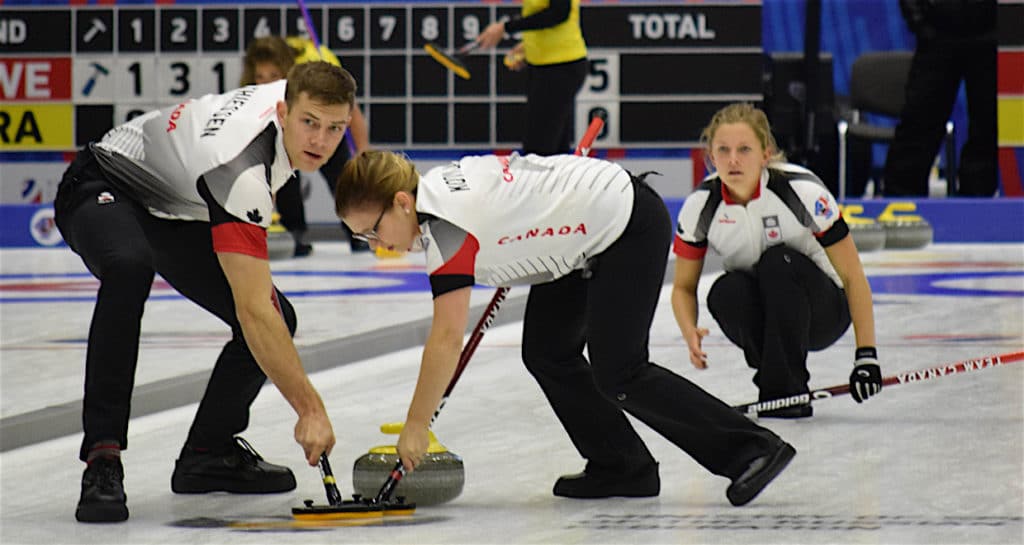 “Our skip was definitely struggling in the first few ends,” said Soligo after the game. “But (the team) totally regrouped and refocused after taking three in the fourth end and heading into the break.” The shaky start was uncharacteristic for this Team Canada, who came into the game with a 4-0 record and a lot of momentum. In the first three ends, a few missed hits by Lizmore allowed Belgium to steal a point and go ahead by one. But in the fourth, Lizmore made a game-changing draw for three to take a 4-2 lead heading into the break. After that, it was all business, as Canada rattled off three straight steals for the 7-2 win in seven ends. “It’s pretty great to see that kind of determination and character when a person is not sliding or throwing great, to dig deep and turn it completely around,” said Soligo about the gritty performance by Team Canada. “That’s why they are all here.” “I have a pretty easy job here with these four great players,” she added. Team Canada will take that momentum into Wednesday’s game (5 a.m. ET) against South Korea’s Kibok Lee (2-1). The 37 teams in Kazan are split into five round-robin pools, and the 16th playoff team will be the fourth-place team from the five pools with the best pre-game Last Shot Draw distance.