Canada’s Mick Lizmore locked up a spot in the playoffs after cruising to a 5-3 win over South Korea’s Kibok Lee at the 2016 World Mixed Curling Championship today in Kazan, Russia. Team Canada took an early lead on an open draw for three in the first end, and despite a couple of misses, Lizmore and his Edmonton team — third Sarah Wilkes, second Brad Thiessen, lead Alison Kotylak and coach Melissa Soligo — were able to hit their way out of trouble and force timely misses from the Koreans. “Besides a few hiccups, a couple of flash peels, one from me in the sixth end there, we felt pretty solid,” said Lizmore after the game. “We caught a couple of mistakes early in our game, in the first end there from the Koreans, so we were able to get a three and from then it was just trying to control the scoreboard.” 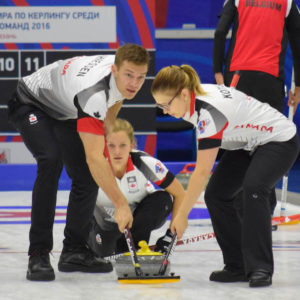 Canada’s Brad Thiessen takes a look as he and Alison Kotylak sweep a shot by Sarah Wilkes at the Kazan Sports Palace during round robin play at the 2016 World Mixed Curling Championship (Photo, World Curling Federation/Alina Androsova)

In the fifth, Canada scored a deuce on a measure to take a comfortable 5-1 lead. An open hit for two brought South Korea close in six, but a hogged guard attempt in eight left Canada an open hit for the win and Lizmore made no mistake putting the game away. Today’s victory was a strong bounce-back for the Canadians, who struggled early against Belgium on Tuesday before finding a way to win. “When you’re front-running like that it’s a little bit easier to play safe and you don’t have to play as risky shots,” said Lizmore. “With the exception of the game against Belgium where we had a tough start to the game, that’s been kind of the theme of our week so far. I think it’s good to know how to deal with both situations so we’re pleased with where we’re at and what we had to deal with in the Belgium game.” Team Canada will play its final game of the round robin on Wednesday at 9 a.m. ET against Austria’s Andreas Unterberger (3-2). The game will be live-streamed on the World Curling Federation event site, www.worldcurling.org/wmxcc2016 Also qualifying on Wednesday were the remaining teams still undefeated in the round robin: Scotland, Hungary, Sweden, Russia, Germany and Turkey. Pool play wraps up on Thursday, and playoffs begin on Friday, with match-ups still to be determined. The 37 teams in Kazan are split into five round-robin pools, and the 16th playoff team will be the fourth-place team from the five pools with the best pre-game Last Shot Draw distance.