Next stop playoffs for Canada’s Mick Lizmore, who capped off a perfect round robin with a 6-4 win over Austria’s Andreas Unterberger at the 2016 World Mixed Curling Championship today in Kazan, Russia. Undefeated Lizmore and his Edmonton team — third Sarah Wilkes, second Brad Thiessen, lead Alison Kotylak and coach Melissa Soligo – battled a feisty Austrian squad who didn’t make it easy for the Canadians. The game got off to a great start, as Lizmore made a spectacular quadruple takeout on the way to scoring a deuce in the first end. With a 6-3 lead in the seventh, Canada almost let Austria back into the game when Lizmore’s final hit rolled out, giving Unsberger the steal of one. But in the final end, Canada ran Austria out of rocks to keep their winning streak alive and turn their attention to the playoffs. 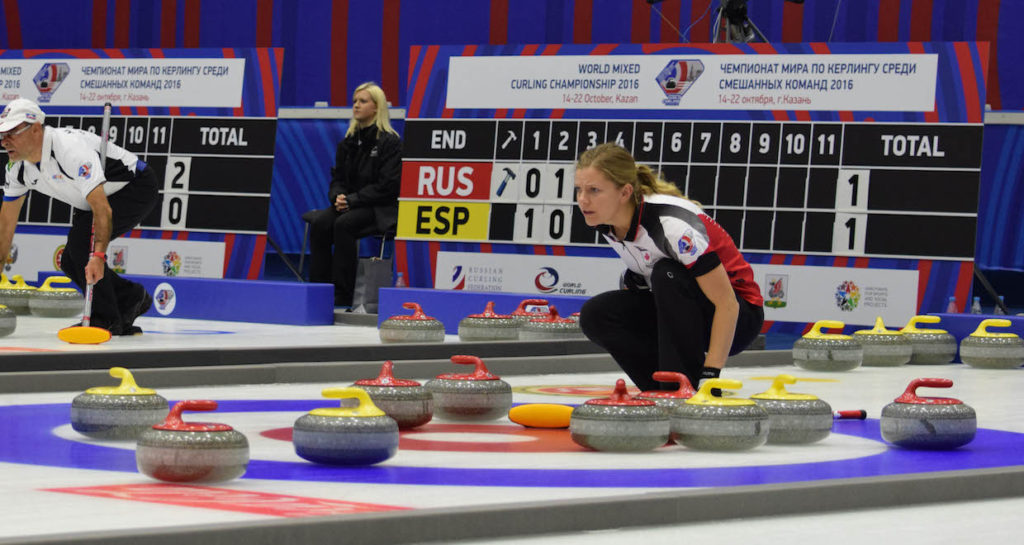 “I think we’re going pretty good,” said the Canadian skip. “Obviously there’s a long road ahead of us heading into the weekend here, but we’re just thinking about taking it one game at a time.” Lizmore knows that the competition is only going to get tougher in the playoffs, where the Canadians will square off against undefeated teams from the other pools. But his team is already preparing. “(We’ll) just try to step up the precision a little bit,” he said. “Our last game wasn’t as sharp as we would have liked it to be. So just paying attention to the details will make a big difference.” The playoff matchups will become clearer once tie-breakers conclude later today. Canada hopes to improve on its result at the inaugural World Mixed Championship; last year in Berne, Switzerland, Max Kirkpatrick’s team from Swift Current, Sask., was knocked out in the quarter-finals by Russia after going 6-2 in the round robin. This year’s Team Canada includes curlers who are no strangers to international competition. Both Lizmore and Thiessen were members of Brendan Bottcher’s bronze-medal-winning Canadian team in the 2013 Winter Universiade in Italy, while Wilkes also played in that Universiade as a member of Laura Crocker’s Canadian team. As well, Kotylak won gold as the alternate for Kelsey Rocque’s Canadian team at the 2014 World Junior Championships in Flims, Switzerland.