Today you can find Manitoba’s Reid Carruthers back into the full swing of his competitive curling season, but it was also a busy summer for the 2011 World Champion. Carruthers, who is a teacher by trade, noticed a gap in his province in terms of high-level camps for junior curlers during the off-season. That gap provided an opportunity for him to bring his passion for curling and love of teaching together. “I’ve always believed in giving back,” says the 2015 Manitoba champion. “I was on a junior team that would go to junior camps in the summer time, and it’s really been a while since there was one in Manitoba. I’ve gone to other provinces to help coach in their camps, and I just loved it. I wanted to create that in my home province, so I partnered with the St. Vital Curling Club (Winnipeg) to make it happen.”

Camp Carruthers kicked off (Week One on August 22nd and Week Two on August 29th) with an incredible coaching staff that included Carruthers, 2016 Manitoba Men’s Champion Mike McEwen, 2014 Olympic Gold medallist Kaitlyn Lawes and 2016 Manitoba Women’s Champion Selena Kaatz (of Team Kerri Einarson). “It was an absolutely awesome start and people are already hoping we do it again,” says Carruthers. “The biggest thing for me putting together a camp, was that I’m not a textbook curling coach. My philosophy in developing athletes is all about creating consistency.” The athletes had a blast, and they got to learn from the best of the best in their province for an entire week. “One of my favorite parts was seeing how excited and comfortable the campers were mid-week,” he says. “At the beginning of the week, there is a lot of nervousness. You know, no one really knows what to expect. But, once we got going and everyone was learning and having fun, I just loved seeing the athletes lighting up and how much they were enjoying the experience.” 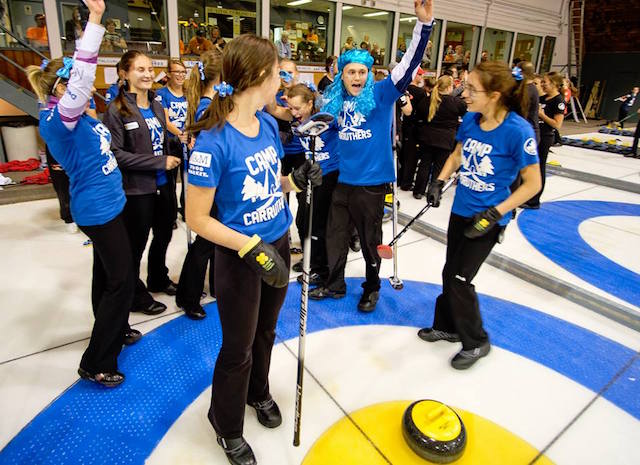 As much fun as it is for all participants, Carruthers quickly learned that there is a lot involved in pulling off such a high-level camp. “The first part, if you want to do something like this, is definitely convincing the curling club to get on board,” he recommends. “I mean, we’re talking putting ice in much earlier than your average curling club, so you have to show the value – and there is a ton of value to the clubs. Junior curlers could be life-long members for a club. An event like this can create a huge turn-over for clubs in the long run.” “Once you sit down with the club, and get them on board, then you have to move quickly to get athletes signed up and committed to coming to your camp. I was pretty pleased, for two weeks of camp we had 104 junior curlers and we hosted a two-evening adult camp where we had 13 athletes,” he says. “It was an excellent start for Camp Caruthers. We are definitely hoping to do it again, especially knowing everyone had so much fun and there was a lot of perceived value, that’s the big thing. ” Curling and teaching go hand-in-hand for Carruthers, who recognizes that curlers have an obligation to share their experience in that on-ice classroom. “Doing things like this, and helping grow the next generation (of curlers), will always be hugely important to me. Juniors are the future of our game,” he says. “We (elite curlers) have to spend the time developing them.” 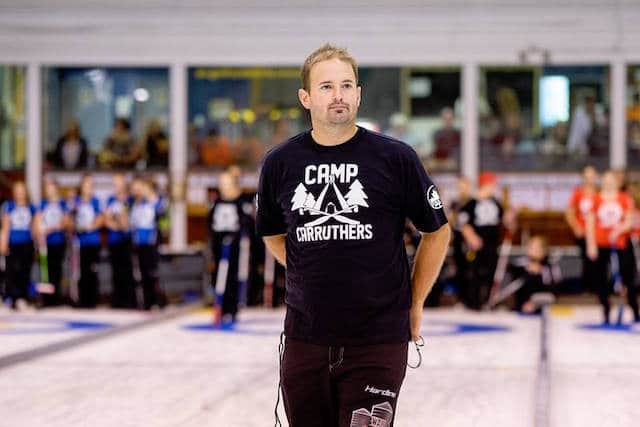 “Juniors are the future of our game,” says Reid Carruthers. “We (elite curlers) have to spend the time developing them.” (Photo courtesy Reid Carruthers)