Earlier this fall, Pat Ray retired from her position as Chief Operating Officer of Curling Canada — a position she’d held since 1987. 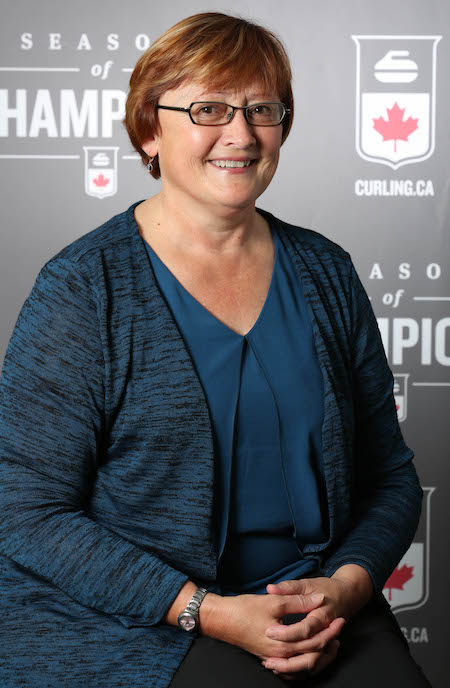 This was no average retirement, we can assure you, and while Pat’s name is not widely known in the Canadian curling community, suffice it to say her positive contributions to our sport were meaningful, to say the least. In times of need, Pat stepped up repeatedly for Curling Canada — she served as this organization’s interim Chief Executive Officer on three occasions (the most recent stint coming during the 2015-16 season) in addition to the not-insignificant demands of her COO duties. Through it all, she was calm, poised, a voice of reason and, always, a friendly face in times of stress. This is a space that is typically devoted to telling you of the achievements of our game’s superstars as they play for national and world championships. We hope you’ll indulge us as we tell the story of a superstar of a different sort. We’re going to let some of the people who worked with her closest tell you why Pat Ray was such a special employee, such a good friend, and why she’ll be so keenly missed around the office in Orleans, Ont. JoAnne Viau, Coordinator, Financial Services Pat holds a very special place in my heart. From the time she interviewed me (accommodating me with a 7:30 a.m. meeting time), to the day she retired, never did Pat make me feel any less than an equal. I have the upmost respect for Pat — she was not only my supervisor, she was, and will continue to be, a very dear friend. She’s kind, generous, extremely caring (she rarely closed her door to anyone, no matter how overwhelmed she was with work), never puts herself first — she is simply a very special lady! My working at Curling Canada for 25 years has a great deal to do with Pat. For me, it’s not about loving my job as much as it is about loving the people you “live” with five days of the week. We had numerous moments of laughter, tears, and tears from laughter — too many to mention. I wish Pat the very best as she begins to enjoy the life she well deserves! Glenn van Gulik, Director, Information Services and Technology Pat was always present; present in the day-to-day life of Curling Canada, present in conversations and ideas, and present in being a friend in everything going on in your own life. Pat was the matriarch of the Curling Canada Head Office, making our lives easier without us even knowing the extent to which she made a difference. Hugh Avery, 2015-16 Chair, Curling Canada Board of Governors I was asked to write a few words on Pat Ray’s retirement, sharing my personal recollection of something that defined Pat for me. How can I do this in only a few words? This past year, the Board of Governors was faced with a difficult situation as our previous CEO left to take on a new opportunity. The Board of Governors knew the best person to lead the organization through this transition was Pat Ray. The only problem was, Pat was considering her own retirement. I remember the making the call; I felt nauseous, thinking, “what if she says no?” Fortunately she said yes. Our sport knows many superstars — Howard, Jones, Ferbey and Schmirler, to name a few. A name many of our fans don’t know is Pat Ray. If you love our game you should know the name Pat Ray because she is a superstar. At least that is how I define her. Karen Wan, Comptroller The first memory I have of Pat was the very first time I met with her during my round of interviews. Prior to my telephone interview, I remember going on the Curling Canada website and seeing a picture of Pat and thinking, she looks like such a kind person; she’s probably someone really great to work for. This only proved more true when I spoke with Pat during my telephone interview (which she agreed to have after working hours in order to fit my schedule). 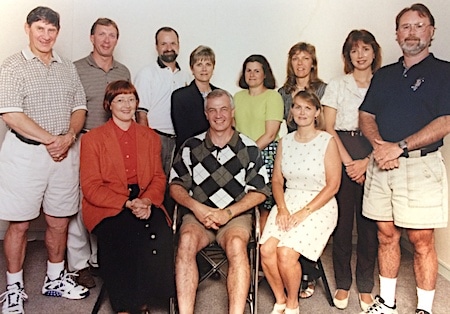 Pat Ray, front, second from left, with the Curling Canada staff back in the day.

I remember getting off the phone with her thinking, wow, I definitely don’t think I got the job but I wish I had because Pat sounded like such a genuinely kind and caring person. I proceeded to call my boyfriend at the time to tell him how sad I was because I had thought the interview had gone terribly but that I really wished I got the job because Pat sounded like such an amazing person to work for. To my surprise, I got called in for a face-to-face interview, and meeting Pat in person only confirmed what a great person she was. It’s been almost seven years since that day, and my original impression of Pat never wavered, and only proved more true each day I worked with her. I have never met someone so kind and caring and inspirational. She is just one of those people with whom you cross paths in your life who leave such a deep and everlasting impact. I only wish I had started working for her sooner so I could have had her as a boss for longer. Louise Delorme, Coordinator, National Athlete Services & Coaching A long time ago, when I was quite young, Pat interviewed and hired me. Over the years, she proved to not only be the best professional role model I could have wished for but. more importantly, the best “quality human being” role model. I could always go to Pat for advice or just to chat or even to vent if I was having a bad day. No matter how busy she was, she always had time to listen, and I felt like she always had my back. Pat is respected by everyone who has ever had the privilege of working with her. She is the consummate professional but also didn’t shy away from some light-heartedness and laughter. I feel very fortunate to have had Pat not only as a colleague for almost 29 years but also as an amazing role model and dear friend. Gerry Peckham, Director, High Performance The essence of Pat Ray the employee, and Pat Ray the person — she was that steadfast and personable entity within Curling Canada staff to whom everybody gravitated for guidance, perspective and understanding. She showed up each and every day with everyone’s well-being front of mind, and simultaneously took care of the day-to-day business of the organization with relentless determination. I have referred to her as the omni employee, and that was predominately based on the fact that the key core values that are critical to effective leadership were always prevalent. Over the years, Curling Canada’s staff was fortunate to work alongside of a true professional and a trusted colleague. Rachel Delaney, Coordinator, Development and Championship Services It has been a pleasure and privilege  to work with Pat. Over my 24 years of working with her at Curling Canada, she has been always there for the staff. Considerate, thoughtful, happy, caring and a true friend; her office was always open and she greeted us with her beautiful smile! Scott Braley, Chief Executive Officer, Curl BC Say it’s not so! No Pat Ray at Curling Canada? It can’t be. Who else can carry the email address PRAY@curling.ca?!?! Indeed, Pat was always the one you could turn to if you needed some help or straight talk. She was never shy to provide you with the exact answer to your question, and always a good listener. The fact she stepped up three times in the interim CEO role during some of the organization’s most challenging times speak volumes about her commitment to curling in Canada, and the care she feels for curling’s volunteers and staff across Canada, regardless of their role. These are big shoes to fill, but a wonderful role model for all of us to aspire to.