It’s early in the season, and your curling club has welcomed some keen beginners into Learn To Curl (LTC) sessions. How do you make sure these potential new members don’t drift away, lose interest and fall off the radar during the season? Organizers at the Barrie Curling Club have found a way to keep those new curlers coming back for more. “A couple of years ago we started a Learn to Curl program and we had 50 per cent and 35 per cent joining the club,” says Chris Hauschild, the past president of the Barrie Curling Club. “Last year, we started LTC early and then rolled folks that wanted to keep playing into a Development League with existing club members joining the league as well. Seventy per cent of LTC graduates joined the Development League (and became club members) and the most surprising thing was that existing club members (seconds wanting to try vice; vices trying as skip; and new skips) absolutely loved the league and totally bought in.” 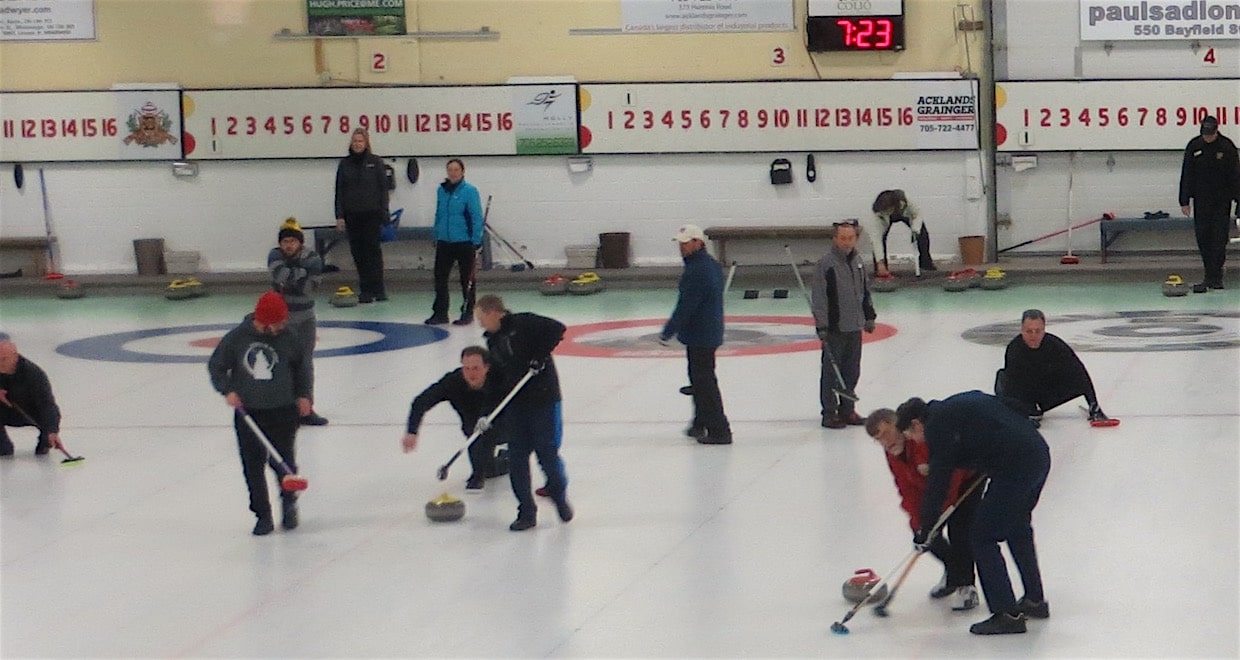 So, how can other curling clubs find the same success? We asked Hausfield to share his experience. What were some of the challenges of earlier Learn to Curl programs at Barrie C.C.? We had our first Learn to Curl in January 2014 for six weeks and again January 2015 for the same length of time. Curlers learned the basic skills as with most Learn to Curl programs in Canada and participants were pleased with the instruction. Some did join the club, but we found that after the six weeks ended, there was no further integration of participants into the club other than follow-up emails. We felt participants received an introduction, but perhaps lacked a push to join a league because many didn’t feel good enough to join the club. Which was far from true! Where did the idea to include current members in the Development League come from? Our current President, Lee Anne Widawski, had the idea of the Development League where club members and graduates of the Learn to Curl could play together with both groups developing curling skills. It was felt that LTC graduates could be integrated into the club with members; LTC graduates would continue to play for a third of a season; and club members could better their skills and enjoy the game that much more. So, how is your Development League set up? Details, please! When: The Development League follows the LTC sessions. There are eight weeks of play from late December to early March. It takes place on Sunday afternoons – in an empty time slot after our Little Rocks and Junior program. It is not all consecutive weekends since there are ice maintenance days and bonspiels that interrupt the league. The disjointed schedule had no effect at all. Team formation: We made up teams with two-to-three LTC graduates along with one or two club members. We made up teams partly based on age, couples and friends playing together, and on what we saw from skill level. In the end, most teams were pretty close to being even. Continued instruction: We had instruction both off and on the ice. Off ice we had training on strategy – very basic for LTC graduates who should know where guards should be placed and why it is they sweep the way they do. We continued with more advanced sessions for club members, many of whom learned something new, too! The other classroom session was on communication – how each member of the team works together and their function on the team. On the ice we worked on skills including reviewing LTC basics. Everyone wanted to play, so other than the first week where we conducted strategy training, we tried to instruct 30-45 minutes followed by game play. The last two weeks was almost all game play. Instruction was conducted by club members. We had a few new club coaches at the club which we had trained earlier in the year (Meridian Credit Union sponsored our new Curl For Life program), and experienced curlers who volunteered their time at the club. Membership incentives: The LTC graduates were given a great incentive to join the league. The fee from LTC was credited toward their club initiation fee; and then they joined the league at a prorated fee for a third of a season. It was a great deal for the participants and great for the club that has new paid members who won’t be scared to play next year! What kind of challenges did you face? There were not many challenges – we did have fewer instructors as time went on. We had two per sheet in the beginning, and one by the end of the sessions. It still worked well. 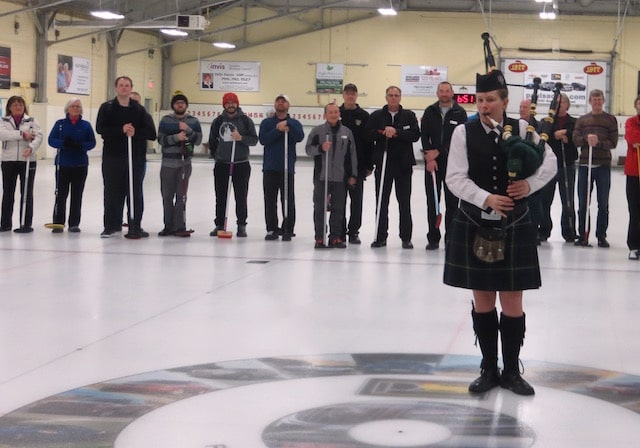 “Teams being piped in at the Tournament of Champions – a great experience for curlers just learning the game and for the experienced curlers in new positions,” says organizer Chris Hauschild (Photo by Sharon Kiley, Barrie Curling Club)

Any highlights? Lots of highlights! • The enthusiasm of this group was infectious. Everyone had a fantastic time curling; and most everyone stayed for the social activities after play. We had a couple of organized days for food (chili one day; platters at the end of the year) and LTC graduates and new teammates and friends stayed for drinks sometimes a couple of hours after a game. • Pinty’s sponsored a bonspiel – the “Pinty’s Spiel” – which was a Jitney where almost half of the participants were from the Development League, again integrating LTC graduates into the club along with more club members. • The top two teams from the Development League played in our Tournament of Champions at the club. They were piped onto the ice with the top teams from all the leagues. It was great to see everyone so involved at the club. • Some LTC graduates who were playing in the Development League even spared with other club leagues, demonstrating they were comfortable enough and ready to join leagues this year as members. • Our club uses Curling Club Manager as its web host and online registration. In addition, we now have real statistics on our members: the average age of our club last year was 58; the average age of the LTC persons who joined the Development League is 48. We therefore have attracted members to the club who can stay with the club that much longer, including several in their 20s and 30s. There were unexpected highlights, too: • I knew LTC graduates would enjoy the development league – the group was fun and wanted to continue curling. I was surprised how much our existing club members enjoyed the game: many learned new skills and were thrilled to apply them in their club play. But they were really enthusiastic playing with the new curlers who, as previously mentioned, passed on their enthusiasm to the members. A few new curlers even joined a couple of experienced members in a bonspiel, demonstrating that skills for new curlers were good and that they truly had become members of the BCC. • For me personally, I was rejuvenated by everyone’s enthusiasm…the league was truly the highlight of my year! Any changes planned for the 2016-2017 season? Based on feedback, everyone was really pleased with the sessions. Some scheduling issues and teaching topics can be smoothed out. We already have had club members want to join the league but we can’t open it up until we know how many LTC graduates join. 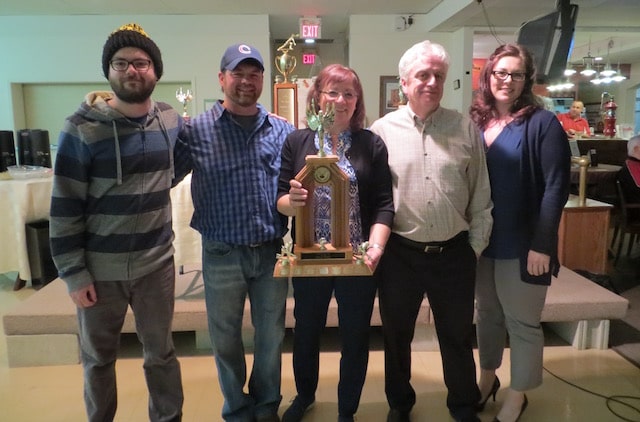 Let’s hear from some curlers. What are your club members saying about their experience with the Development League? Club members Jim and Rita Bolton: This Development League was true genius — a win-win educational league for each team position. A huge benefit of the Development League was that teams were matched up with seasoned skips who oversaw the entire game and provided expert play-by-play support, lesson reminders, and tips to each player. Any errors committed by curlers during the Development League games were done in a safe and non-judgmental environment — a huge confidence booster to each player! LTC Graduates Gord and Jane Killer: If the “proof is in the pudding”, the increasing number of rocks in play near the completion of ends, the large number of participants who signed up for the Pinty’s Bonspiel, the number of participants who began to spare in other leagues, and the number of people who indicated they wished to return next year all highlight the confidence, skill and enjoyment the Development League provided to the folks fortunate enough to have participated. LTC Graduate Diane Thiesen: As a first-year curler, it was the perfect way to get involved in curling and get started on the right foot. It allowed you to be a part of an actual league but also let you develop basic skills in a non-judgmental and supportive environment. It gave me the confidence to join other leagues at the club and even spare against a team that had the head instructor on it! Club Member Anne Arksey: I have curled for years, but this was the best instructional curling I have ever experienced. The skills and knowledge I attained from this league will definitely help make me a better curler, with a better understanding of the game. I really benefitted from both the on-ice and off-ice sessions. Not only that, but I met some fabulous people through this league that also wanted to learn about different aspects of the game. We had a fabulous time! Club Member Corrine: I have learned more about curling, delivery, strategy and understanding the game in the 10 weeks of playing in the development league, than in the total of my last 15 years curling. Want to know how you can incorporate a Development League into your club’s program? Contact Haus (Chris Hauschild) [email protected]