Wayne Tuck and his Ontario team stole their way to a win over Team Nova Scotia on Monday afternoon at the 2017 Canadian Mixed Curling Championship in Yarmouth, N.S. 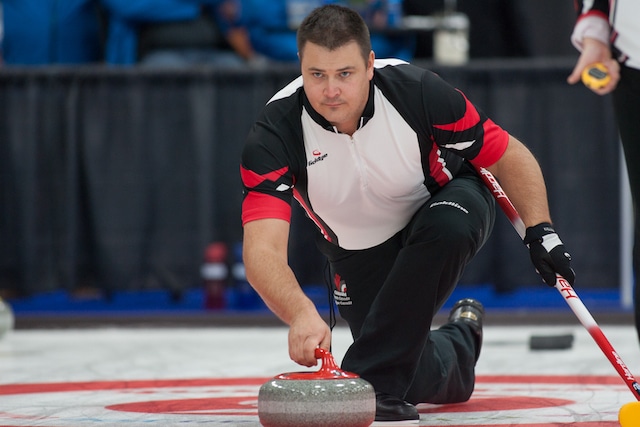 Home-province favourite Paul Flemming, of Halifax, had his hands full against Tuck and his Ilderton Curling Club foursome. The Ontario team opened with a steal and stole again – a single in the final end – to seal the 8-5 victory after a see-saw battle. Tuck now has a 2-0 record and sits at the top of Pool A, tied with Newfoundland and Labrador’s Adam Boland, who defeated Alberta’s Evan Asmussen 4-2. In other Pool A action, Manitoba’s Braden Calvert gave up a steal in the first end, then piled on for four points in the second and four more in the sixth to defeat Northwest Territories’ Donovan Arey 10-3. Charlie Sullivan scored three in the fifth end and stole another in the eighth to lead his New Brunswick foursome to a 6-3 win over Prince Edward Island’s Veronica Smith. In the only Pool B match-up of the afternoon, Northern Ontario’s Trevor Bonot kicked off with three points in the first end against Nunavut’s Ed McDonald on the way to a 5-2 win. The round robin continues on Monday evening with games starting at 7 p.m. AT. For event, team and draw information, visit www.curling.ca/2017mixed. Draw scores/standings will be immediately available on Curling Canada’s website, www.curling.ca.