This week, John sits down with John Epping, a skip who is currently ranked fifth in the world and third on the 2016 Money List, and who has just about done it all. A Canadian Mixed champion, an Ontario Junior champion, a Grand Slam champion, and a fixture on the WCT for the last 5 years, John’s rink will be attempting to qualify for the Olympic Trials at the Canada Cup in Brandon from Nov. 30-Dec. 4, 2016. Welcome to Magical Question Fun Time, the Curling Canada feature where comedian John Cullen sits down with your favourite curlers for interviews like you have never seen. Each interview will feature eight questions: five standard questions that will be asked to each curler, two questions specific to that curler, and one question that the curler interviewed before them asks. 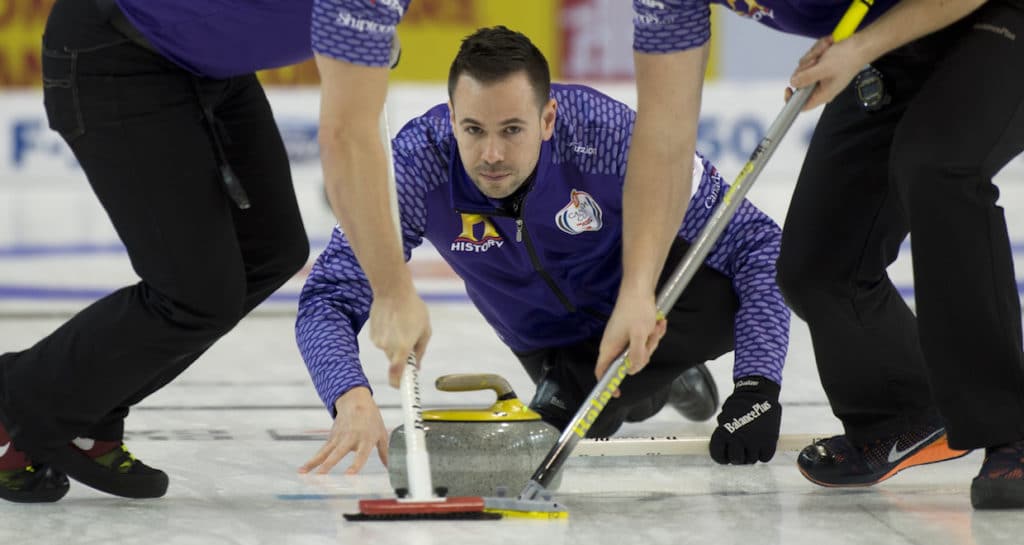 1. What’s the nicest shot you’ve ever been a part of? John Epping: So I was trying to read an MQFT before this, and I got stuck on this question. John Cullen: I was gonna say, of anyone I’ve interviewed, you’ve had a lot of highlight-reel shots the last few seasons. JE: I have had a couple of doozies, which makes this really, really hard. Mine is probably in juniors, to be honest. It was my last year of juniors and I had never been to Canadian Juniors even though my team had been the favorite a couple of years in a row and we choked. So we were playing the Ontario semifinal in an extra end, and we didn’t peel very well, there were a million guards up. The only shot I had was to play a 25-foot runback into the pocket of two rocks that were just about even, and then the rock I was raising had to wiggle through the pocket to knock one of theirs off the button. JC: And you made that? Holy. That sounds insane. You must’ve celebrated like crazy. Is there video of it somewhere? JE: I remember celebrating pretty hard, yeah. I remember jumping up and down and my second, John Grant, just came sprinting down the ice and picked me up, it was crazy. Unfortunately I don’t think there’s video anywhere, but people who were there will still mention it to me and talk about it. We ended up winning the Ontario final pretty nicely, so it was pretty cool to do it after that. 2. Who could you take in a fight? JE: (laughs) You’re right, I should’ve read the interviews beforehand, that’s a great question. Who do you think I could take? (laughs) JC: (laughs) I have no idea. I will say that a popular answer has been Colin Hodgson. JE: Oh, I think I could take Colin for sure. (laughs) I got both the height and the reach on him. I like that. You know what? I could probably take my third, Mat Camm, too. He’s a wuss. (laughs) Plus, he would let me win, because he knows better. 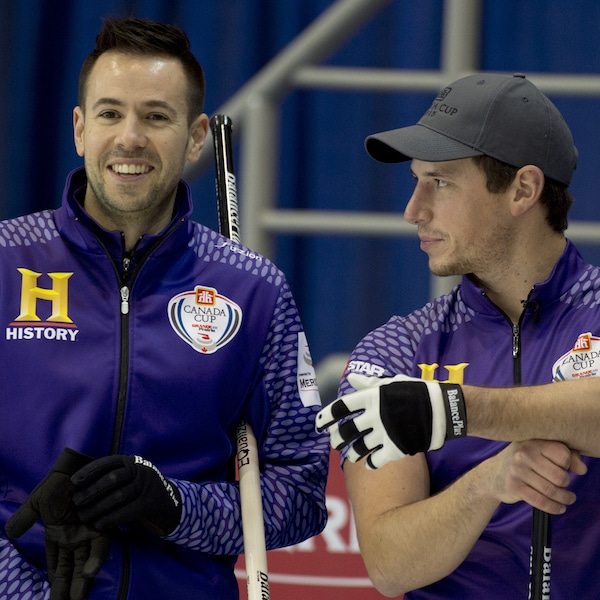 JC: (laughs) Yeah, as a lead, I think I would let my skip win no matter what. JE: Exactly. If he knows what’s best, he’ll let the skipper win. (laughs) And maybe I should fight Ben Hebert after what he said about me. You think I could take him? JC: Uhhh… JE: (laughs) That was a joke, of course I couldn’t. JC: That was pretty crazy that he just went in on the skips like that, but it was pretty funny. JE: I know, right? No, I’m kidding, I just laughed about that for sure. The game needs more of that, he’s great. He’s probably just mad because we’ve beaten him a lot recently. (laughs) 3. If a deli named a sandwich after you, what would be on it? JE: Wow. This is a tough one, because I’m honestly the world’s least picky eater. You could put anything you want on there and I would eat it. Hmmm… (pauses) You know what? No bacon. A lot of people love bacon on their sandwiches, but not for me. JC: You love everything but you don’t love bacon? JE: No, no, I like to eat bacon for sure, but just not on sandwiches for some reason. And actually, no cilantro either. It tastes like soap. JC: Oh, I hate cilantro too, it’s just brutal. JE: Right? I hate that. So that’s The Epping. Anything you want on there, but no bacon and no cilantro. (laughs) 4. What’s the worst job you’ve ever had? JE: Wow. That’s great question but I’ve been really spoiled, I had great jobs all the way through. I worked at Shoppers Drug Mart when I was younger, I worked in a daycare for a bit, and the other job I had was in medical sales. And I honestly loved them all. JC: The daycare though, I mean…you must’ve had bad days. JE: Oh, for sure. I mean, some TERRIBLE days. (laughs) Overall, I loved it, but yeah, I mean…nobody wants to change diapers, and you hang around kids long enough and they figure out how to push your buttons and what they can get away with. I’m pretty good at the one-liners though. I think I kept them in check most of the time. 5. What’s a stupid thing you incorrectly believed was true for a long time? JE: (laughs) Well that’s an interesting question. There’s an answer I could go with, but let’s say that I was going to go to the Brier by now. JC: (laughs) Oh man, we are in the same boat on that one brother. And we’ve both gotten pretty close, though you were very close last season. Glenn had to make a pretty darn tough shot to win against you in the Ontario final last year, did you think you were gonna make the Brier then? JE: You know, about halfway through the 10th end I felt pretty good, I liked our chances. But once my last rock stopped, I knew he would likely make his last one. JC: So is 2017 the year, John? JE: If we play like we can, then yes, I believe it is, but when it comes down to a one-game final, you never know. And that’s what our sport is all about. 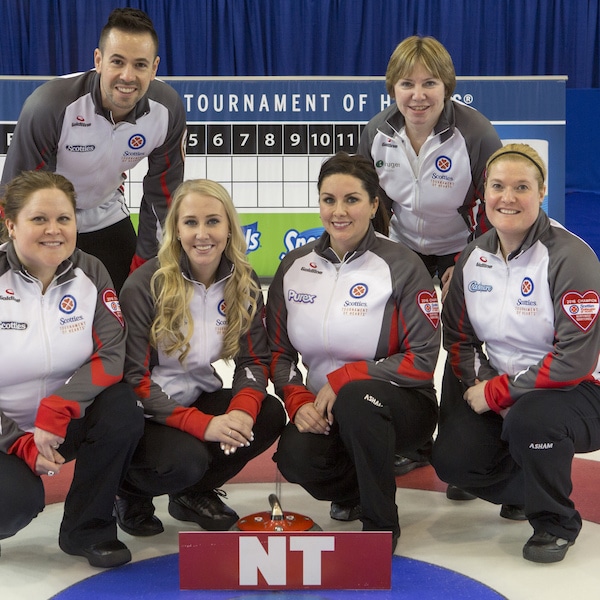 6. Now onto the John Epping-specific questions and I’ve heard you had quite an adventure last season coaching Team Galusha at the Scotties. Can you tell me about the view from your hotel room? JE: The view…I’m trying to remember… JC: I heard that perhaps the Fire Department was in view from your window? JE: (laughs) Oh man, you got me good. The Fire Department WAS there. The girls definitely all wanted to be around my room, that was the hangout for sure. We had all of our meetings in there and it became pretty easy to get them there that’s for sure. It was a nice view. (laughs) JC: Do you think it helps being gay and the coach of a women’s team, that you can bond over things like that? JE: Well, I’m sure it doesn’t hurt. (laughs) Last year was my first year full-time coaching, and I think it’s true that perhaps the ladies find it easier to talk about things with me, that’s for sure. It’s probably why Lisa [Weagle] also plays mixed doubles with me. We have a great time. 7. Now, last season, I heard that a cardboard cut-out of yours went missing from the Sherwood Park Curling Club. Two questions: first, was it ever found, and second, what do you think the person who stole it did with it? JE: (laughs) You know, there have actually been a few that have gone missing, and they’ve shown up in some weird areas. (laughs) I don’t think that one ever actually resurfaced. JC: What kind of weird places are we talking? JE: Well, I can say that I went on a pub crawl once and my cut-out showed up at one of them. (laughs) I didn’t know it, but a friend had stolen it from somewhere and brought it out with us to bug me about it. I think the cut-out partied with us all night and now it’s in their basement. As for the other ones, who knows where they ended up. What would you do with it? JC: (laughs) I like that you’re turning all these questions back on me. I guess I would take it out on the ice with me and use it as a broom, so when I’m practicing by myself, I could pretend you were my skip and you were helping me out. JE: (laughs) And I would never be happy with any of your throws if you took me out to practice. (laughs) I have a pretty mean look on that one, I don’t know if I would take it out to practice. 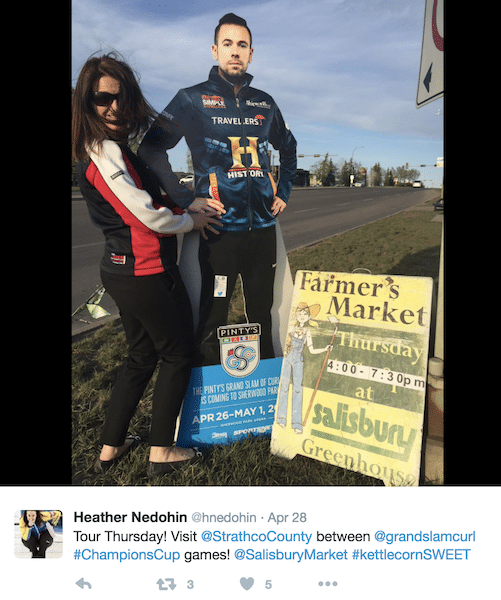 8. And now the last question, and I have to admit, you got off pretty easy this week because Tracy Fleury is the nicest person in the universe. She asks what your team does for fun in the downtime at bonspiels? And I don’t think she meant like partying, more like, let’s say you’ve qualified out of A and you have a day off: what do you do? JE: Okay, well we don’t qualify A side that often, we tend to be more of the C bracket warriors, but if we do qualify A, rule of thumb is to go for a big Keg dinner. Then generally, if perhaps we have consumed a little too much, we REALLY sleep in on the Sunday. Then we’ll hit up a hot tub and a pool. We’re a big water slide team. If there’s a water slide around, we’ll find it. JC: Do you go in spiels based on the access to waterslides? It’s something we’ve considered. JE: (laughs) I don’t think we have, but in Saskatoon this year there was a waterslide and we hit that thing up often. We’re all big-time kids at heart, so we love to do stuff like that. JC: My team is a board games team, we got really into that the last few seasons. Or cards. We used to play video games, but our skip is 45 and our coach is 55 so we try and bring it down to their level. (laughs) JE: Oh man, we would love to play cards but Mat sucks at them. Like, he can’t play cards. Just can’t figure it out. But we do competitive stuff like that, we’ve been glow-in-the-dark mini-putting before, anything we can compete at, we’ll do. We always do book ends, so me and Tim (Tim March, John’s lead) against Pat and Mat. It gets intense, but we love it. JC: Awesome, thanks John. And if I could get a question for my next guest, who will be Taylor McDonald of Team Rocque. JE: Alright, ask her which team she likes to beat the most? I was going to be a bit more harsh on Taylor, but I think that should do the trick. JC: I love it! Thanks so much John, and best of luck at the Canada Cup and the rest of the season! As always, you can follow John on Twitter @cullenthecurler, and you can follow John Epping at @EppingJohn.