Manitoba’s Andrew Wickman and his Winnipeg rink are rolling in Kelowna at the 2016 Travelers Curling Club Championship. The team from the Fort Rouge Curling Club of Wickman, third Jeff Tarko, second Mark Blanchard and lead Cam Barth improved to 3-0 after a narrow 6-3 win over Northern Ontario’s Gary Weiss on Tuesday evening. 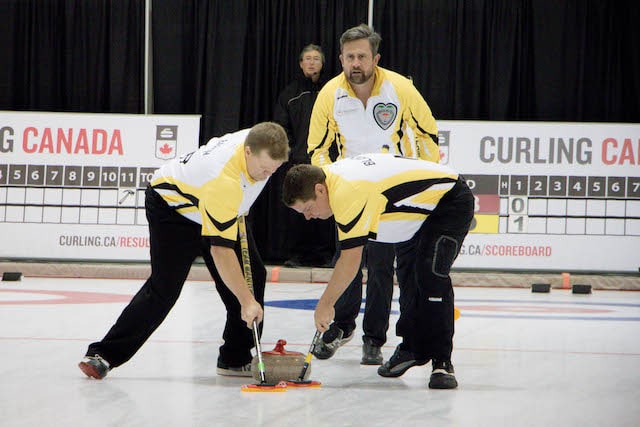 Northern Ontario opened the scoring with a steal of one in the first end but momentum was creeping toward Wickman for the first half of the game thanks to a Manitoba steal of two points in the third end. Weiss, with third Deron Surkan, second Aaron Rogalski and lead Mark Beazley, was facing all sorts of trouble in the fourth end. The Port Arthur, Ont., team needed the pin, facing four Manitoba counters. “He made one of the best draws I’ve seen in a long time,” Wickman credited Weiss after the game at the Kelowna Curling Club. Momentum swung back to the Northern Ontario champions after the clutch draw. “The tempo of the game sped up after that shot and they kind of got us off our game. Gary and his team played really well,” Wickman added. “Those can sometimes be the game changers and that was a team shot that kept us positive for the back half of the game,” Weiss said after dropping to 1-2 in the Pool A standings of the men’s event. The Manitoba champions were held to a single in the seventh end to go up 4-3 coming home in the eighth end but without hammer. The Wickman rink laid out all sorts of pressure in the eighth end and Weiss needed a piece of the button for the tie but came up short. Wickman admits, despite starting 3-0, he didn’t expect to feel the pressure of wearing the Bison on his back quite so much as he does at the Travelers Curling Club Championship. “I’ve played in about six Manitoba provincial championships in the bigger arenas but I feel so much more pressure here and I think (representing the province) is just that whole other game,” Wickman said. Manitoba got rolling early at the event with convincing wins over Teams Quebec and Nunavut in the first two days of action in Kelowna. The team out of the Fort Rouge Curling Club is back on the ice Wednesday against Alberta (2-1). 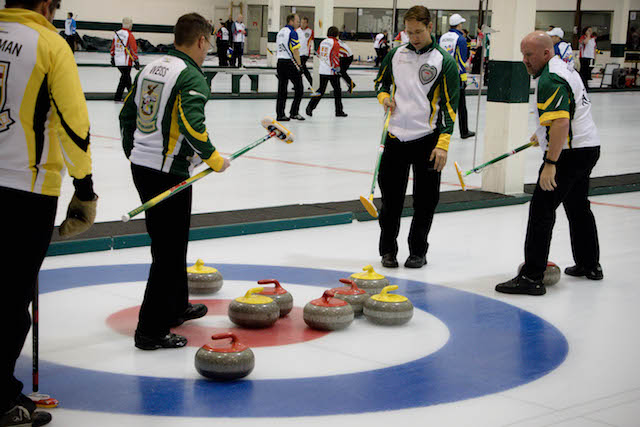 In Pool B men’s action Ontario’s Wesley Forget improved to 3-0 with a 7-1 win over New Brunswick. Nova Scotia remains undefeated and was idle in the Tuesday evening draw. British Columbia got past Yukon 8-2 and improve to 2-1. The Northwest Territories picked up their first win over Newfoundland and Labrador. Ontario’s women’s rink also moved to a 3-0 record after downing B.C. 7-5 in evening play in Pool A. Nova Scotia’s women’s rink escaped a late charge from Yukon to hold onto the victory and improve to 3-0. Yukon dropped to 0-2. Manitoba’s Tracy Andries is also sailing in the women’s Pool B after picking up their third win in the event. Newfoundland and Labrador remains in the playoff hunt with a 2-1 record despite dropping their Tuesday afternoon game to host British Columbia. Quebec’s Nathalie Gagnon is also still in the hunt with a 2-1 record. The 14 men’s and 14 women’s teams are split into two seven-team round-robin pools. After a single round-robin, the top three teams in each pool will make the playoffs. The first-place teams will be seeded directly into the semifinals, Friday, Nov. 25, at 7 p.m. (all times Pacific). The second- and third-place teams will meet in crossover quarter-finals Friday at 2 p.m., with the winners moving into the semis. Selected games from the 2016 Travelers Curling Club Championships will be live-streamed at www.curling.ca/2016travelers/ Scores and standings from the event will be available at www.curling.ca/scoreboard/. For draw times, team lineups and other event info, go to: www.curling.ca/2016travelers/