Elite curlers find their balance – on and off the ice

Story by Cathlia Ward The roaring game of curling has certainly evolved over the years. Now we celebrate curling as a high-performance Olympic sport, and we watch in awe on television or at championship events as some of our biggest heroes chase their dreams. What we don’t see, as curling fans, is what goes on behind the scenes in the lives of our hard-working athletes. One of the best things about our game is that its high-profile competitors are elite athletes on the weekends and regular people during the week. Our Olympians could be teachers, lawyers, civil servants and chiropractors who are trying to find the balance between their dream careers, their family lives and of course their athletic aspirations. To many, it may seem impossible. How can you go to school full time and curl full time? How can you work 40 hours a week and curl 40 hours a week? How can you make sure you spend time with your kids, when you’re away all weekend or, for some championships, all week? It may seem crazy and unmanageable, but for many of Canada’s brightest stars, this is their reality. Hectic at times, they’re just trying to make it all work – and they are! 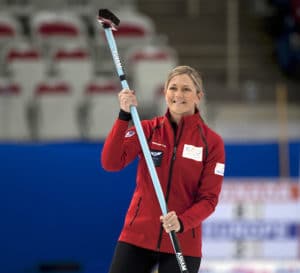 Lori Olson-Johns: “Teammates, and working together to achieve that goal, the experience of that is priceless.” (Curling Canada/Michael Burns photo)

Lori Olson-Johns – who plays third for one of Canada’s top woman’s teams out of Edmonton, Alta., skipped by Val Sweeting – has both a young family and her dream job, but she also dreams of being at the Olympics in 2018. “I always wanted to be a physical education teacher because I had a really great teacher in Fort McMurray (where I grew up),” says Olson-Johns. “And of course having success when I was young in curling meant I wanted to continue curling as well. So, I went away for four years to get my degree, kept curling and came back to Fort McMurray, where I walked into a Physical Education job and it was a dream come true.” Olson-Johns is one of many curlers who compete at the top of their game while still managing to continue pursuing a career they love. “The time with the students, it’s so rewarding on so many levels,” she says. “I love my job, I love my students. There’s not a bad day when I go to school. I think it fits well, that I am a Phys. Ed. teacher though – it shows my students that they can achieve their goals too, with a lot of hard work.” Aside from working full time in a job that is very demanding, Olson-Johns and her husband, Cody Johns, are raising two daughters aged six and seven, and she says it’s definitely a balancing act. “I do my workouts at 6 a.m. because my girls are still asleep,” she says. “I come home from my workout, and help get the girls ready for school. Then we all go to school and I spend the day giving 110% to my job. We all get home for supper, homework and bed and then if there is any curling that happens, I go and do that. My days are definitely packed full, but I’m able to make it work, because I want to make it work and I have an incredible support system. My parents are so supportive and so is my husband. You need all those pieces in place in order for you to perform at your best.” Although balancing all of her aspirations might not be easy, Olson-Johns encourages young people to continue to pursue their athletic and academic endeavors at the same time. “There are so many other factors that we learn from sport, that we can’t learn from a classroom,” she says. “The gifts I have been given, and I hope my girls have been given, really can’t be found anywhere else. Teammates, and working together to achieve that goal, the experience of that is priceless. If you take five years in school, and are able to play a sport at the same time, the experiences and memories are truly priceless.” 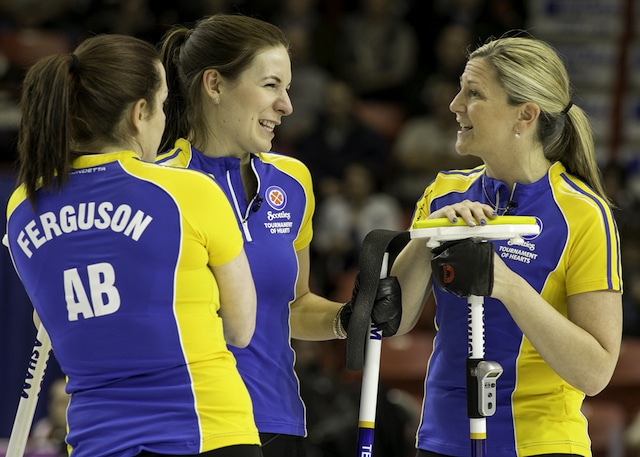 Alberta’s Kevin Koe, the 2016 World Champion, is also familiar with the challenges of juggling career and family in between curling events, but it all started with pursuing an education and then establishing himself with his job and employer. “I moved from the Northwest Territories to go to school in Calgary,” says Koe. “I wasn’t totally sure what I was going to get into, but knew I wanted to do something business-related. Now, I’m a Surface Landman at Repsol Oil & Gas Canada Inc., so I do a lot of different things. I deal with a lot of farmers when we have new projects, which is exciting. We want to discuss with them or maybe use their farmland, (so) we’ll have the conversations and work towards making that happen.” “I’ve been at this company, which was previously Talisman Energy, for 16 years. I can definitely say they (Repsol Oil and Gas) always have been supportive of my curling dreams,” he says. “I probably didn’t play quite as much when I first got here. It’s tough to curl 15 weeks a year when you’re starting out (in a new job). But now that I have established myself, they’ve actually been a sponsor of my team(s) for the past six years.” Although life on the road might seem glamorous to some, Koe explains that his home life and career are never far away. “I still do some work when I’m away curling. If issues pop up with my projects that need attention, I’ll have to either make some calls or send some e-mails and kind of coordinate from wherever the spiel is,” he says. “The good thing is I can do that with my job and with advances in technology. I’m still working when I’m away, depending on the situation.” And sometimes it’s personal vacation time that gets used up so that Koe can hit the road with the team, which means leaving his wife, Carla, and two daughters (aged nine and 11) back at home. “It can definitely be busy, especially during the Fall when you’re gone for four days and then home for a couple and gone again,” he says. “It’s definitely challenging. I’ll be the first to say my wife does the majority of the work at home, especially when we’re playing a bunch in the run of a month. It gets tougher as the kids get older and you’re missing out on things, but work and family mostly happen in between events. It’s difficult to manage everything, but when you have so much support it’s not so bad.” 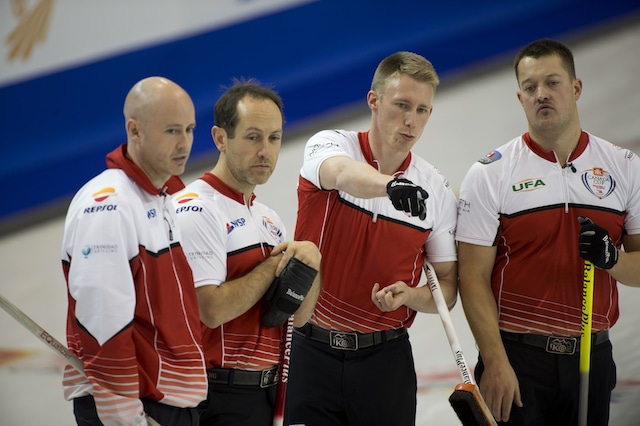 Even when Koe is home focusing on work and family, curling and training is still at the forefront of every day. “Between events, we’ll get out for a couple practices and I’ll usually do my training on my own time. I’ll go and throw rocks on my lunch hour, so I can be home in the evenings,” he says. “The Glencoe (Team Koe’s home club, in Calgary) is a great facility and there is always ice time during my lunch hour. Off-ice training is a huge priority during the summer, and during the season you’re trying your best to stay in shape but probably not working out as hard trying to manage between events being rested.” Koe understands that balancing all of these priorities is challenging and sometimes quite draining but he still thinks it’s important to keep your foot in the door with curling, even when life is busy or you’re a young curler starting out in the sport. “My suggestion would be to not give up the game, if you have that option. When I was in university, I definitely wasn’t traveling around to spiels far away but I would go to spiels that were close,” he says. “Build your way up through smaller spiels and stay in the game. You definitely don’t have to play a ton but obviously everyone needs a career eventually. It’s tough to say you’re going to be able to live on curling forever, but I think that by taking that approach you’re not staying away from the game too long. Focus on the local and provincial tours, depending on what is available and at the same time try and start your career.” As we watch our favourite athletes compete this season, and marvel at their abilities and athleticism, I’ll be sitting on my coach in awe not just of their on-ice prowess, but also their commitment to make it all work. As far as real-life super-heroes go, our top-level Canadian curling athletes are about as close as it gets. 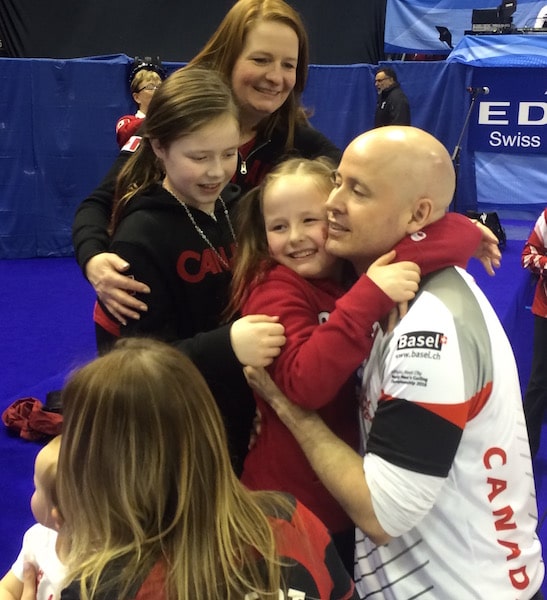 Kevin Koe shares a moment of celebration with wife, Carla, and their two daughters after winning the gold medal at the 2016 World Men’s Curling Championship in Basel, Switzerland (Curling Canada photo)