A nagging hip/groin injury has forced 13-time Newfoundland/Labrador champ Brad Gushue to pass up on a trip to Brandon, Man., next week for the 2016 Home Hardware Canada Cup, presented by Meridian Manufacturing. 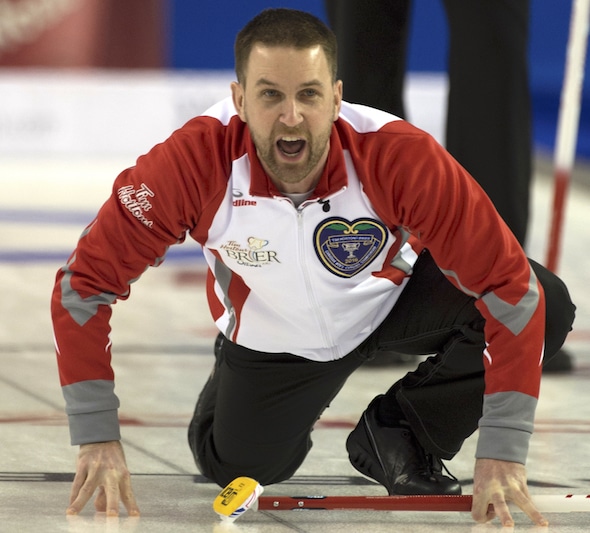 Brad Gushue announced on Wednesday that his hip/groin injury will keep him out of the 2016 Home Hardware Canada Cup. (Photo, Curling Canada/Michael Burns)

Gushue, who’s been in intensive physiotherapy for much of the 2016-17 season to repair the injury, will be replaced by Calgary’s two-time world junior champ Charley Thomas, who’ll throw third rocks in a lineup that will be skipped by Mark Nichols and will be rounded out as usual by second Brett Gallant and lead Geoff Walker.

The team, even with Gushue yet to play a game this season, currently sits first on the 2016-17 Canadian Team Ranking system, having used a handful of different replacement players. 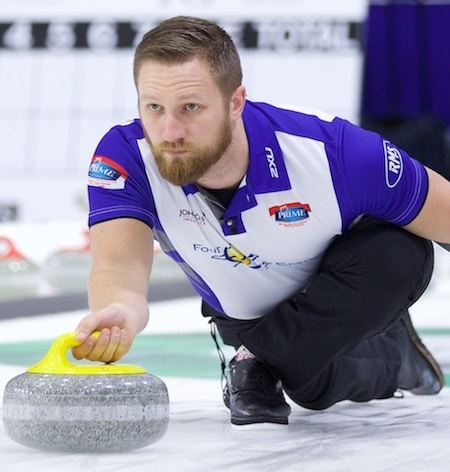 “I’m definitely making progress, and I want to keep doing my physio to make sure that I’m back to 100 per cent in time for the Brier playdowns,” said Gushue, who’s aiming to represent Newfoundland/Labrador at the 2017 Tim Hortons Brier in his hometown of St. John’s. “The great thing is that the team has been doing so well without me. Mark is one of the world’s best players, and he’s been showing that this season. Charley played extremely well with the team at the Grand Slam event in Okotoks, and I’m sure they won’t miss a beat in Brandon.”

It will be the fourth event that Thomas has spared in for Team Gushue. He also played vice-skip at the Grand Slam World Financial Group Masters in Okotoks, Alta. (quarter-finalists) as well as at the World Curling Tour’s AMJ Campbell Shorty Jenkins Classic (runner-up) and the Challenge de Curling de Gatineau (semifinalists).

Thomas skipped back-to-back champions at the 2006 and 2007 Canadian and World Junior Championships, with connections to his Canada Cup teammates in both instances. Walker was Thomas’s third in 2006 and the alternate in 2007, while Thomas he beat Gallant (representing P.E.I.) 7-6 in an extra end in the 2007 Canadian final. Thomas also won the 2015 Canadian Mixed Doubles title with partner Kalynn Virtue. His own men’s team currently sits 12th on the CTRS and was the runner-up to Kevin Koe at the 2016 Boston Pizza Cup Alberta men’s championship. 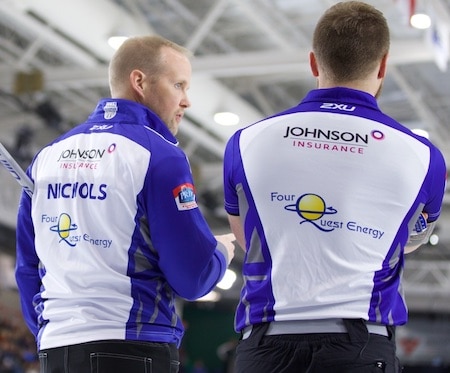 “Obviously I know Brad is frustrated to miss a great event like the Home Hardware Canada Cup, but we’ll just keep doing what we’re doing and try to make as many shots as we can,” said Nichols. “Charley throws a great rock and is very good to work with in the house. We’re looking forward to seeing what we can accomplish in Brandon.”

Thomas also is the team coach for Chelsea Carey’s Calgary team, which also is playing at the Home Hardware Canada Cup. He’ll continue working with the team in the leadup to the first draw, on Nov. 30 at Westman Communications Group Place in the Keystone Centre.

The top seven men’s and seven women’s teams will be in Brandon. At stake for the winners will be berths in the 2017 Tim Hortons Roar of the Rings Canadian Curling Trials in Ottawa — the event that will decide Canada’s four-player teams for the 2018 Winter Olympics in PyeongChang, South Korea — as well as a berth in the 2017 World Financial Group Continental Cup, presented by Boyd Gaming, Jan. 12-15 in Las Vegas.

Schedules, team lineups and ticket information are available at www.curling.ca/2016canadacup/