Years in the making, Newfoundland and Labrador men return to national stage

Qualifying for a Canadian men’s curling championship in any province is a major feat. Doing so in a province such as Newfoundland and Labrador where Brad Gushue has dominated the men’s curling scene for over a decade is even more difficult. 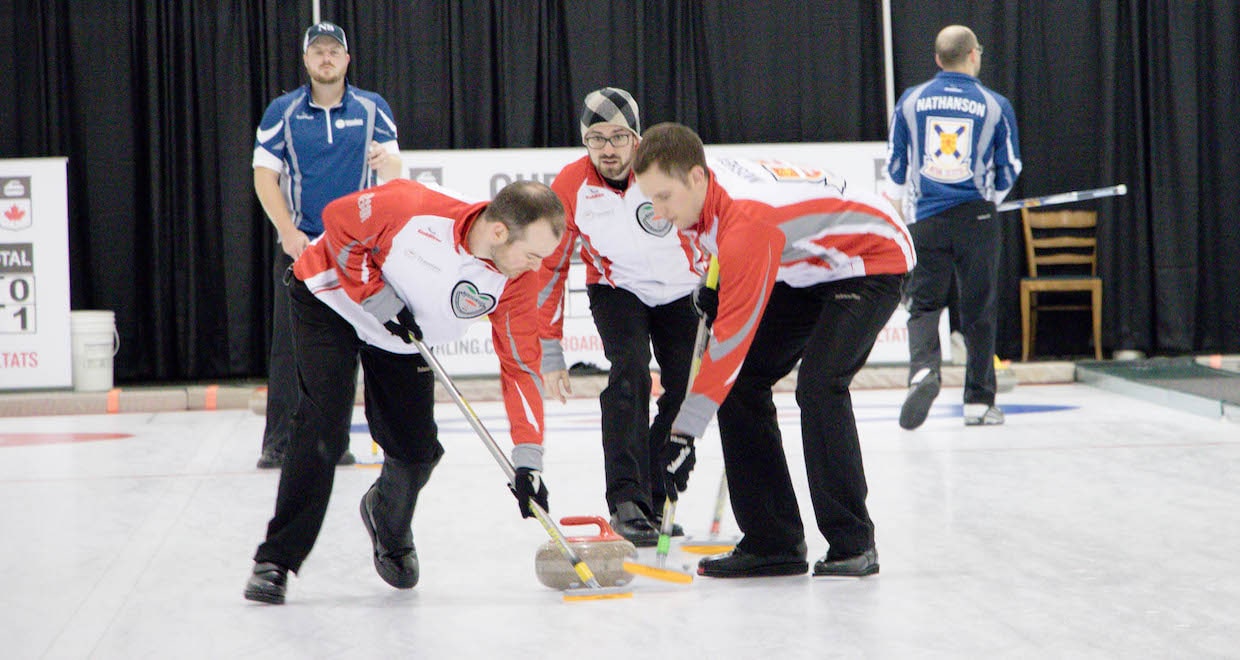 “The Travelers gives us that opportunity to play at a national level that we otherwise may not have that chance at say a Brier,” Newfoundland and Labrador lead Mike Mosher said from Kelowna at the 2016 Travelers Curling Club Championship. “We know the odds are stacked against us in Brier playdowns,” but Mosher says the Travelers is the perfect fit for his young teammates. The Travelers has not only given the Trent Skanes rink from the Re/Max Curling Centre in St. John’s the opportunity to wear their provincials colours, it has also helped them improve their chances in other events. “We do play the Tankard back home and all experience, like this one, is good experience, especially against provinces with the calibre everyone has reached at the Travelers,” Mosher said after the team’s second win in Kelowna. They improved to 2-3 after three days of competition. Skanes and Mosher have been teamed up with third Nick Lane and second Jeff Rose for just two seasons. This is Mosher’s first time at a national curling championship while Rose went to the 2006 Brier and Skanes and Lane have previous Canadian junior experience. “To put the provincial crest on and represent your province again is unbelievable. It’s been almost 15 years since I last did it and I can’t describe the feeling that rushed back to me,” Lane added. 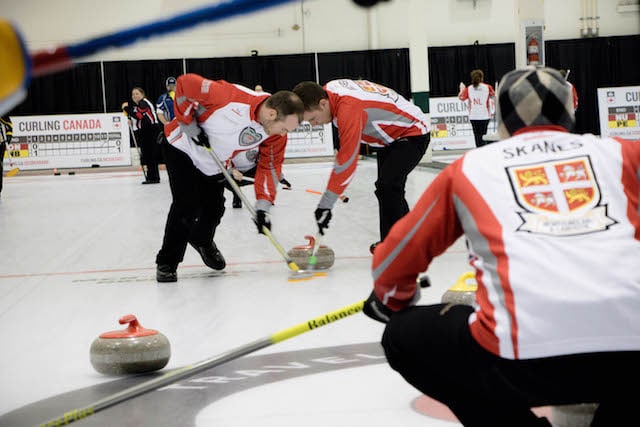 Two men’s teams remain unbeaten in the event. Ontario’s Wesley Forget and Saskatchewan’s Kory Kohuch sit atop the two pools. Saskatchewan defeated Manitoba in a battle of previously unbeaten Pool A teams on Wednesday afternoon. The difference in that game was a steal of two for Saskatchewan in the sixth end to take a three-point lead. Kohuch and his Saskatoon foursome didn’t look back in defeating Manitoba 4-1. In women’s play Alberta’s Morgan Muise helped tighten the standings in Pool A play. The Calgary rink handed Nova Scotia their first loss of the event. Alberta, Nova Scotia and Ontario each have one loss. The Saskatchewan women picked up an important win over Quebec in women’s Pool B action. Saskatchewan improved to 3-1 while Quebec dropped to 2-2. Manitoba leads that pool with a 3-1 record. The provincial and territorial champions are not only competing on the ice at the Kelowna Curling Club, they’re also competing in a major fundraising effort as part of the national championship. All 28 teams are participating in a challenge to benefit youth curling across Canada through the Curling Canada Foundation. The team that raises the most money will earn a cash grant of $6,000 for improvements to its home club; additionally, there will be draws for $1,000 prizes for club improvements. You can find more information by CLICKING HERE. Each team has brought items to Kelowna to be bid on by other players and fans. The auction, which closes Friday, has already raised over $20,000. “We put together items that had some regional flavour. We thought it would be cool to ask Mark Nichols to contribute a signed jacket.” Skanes said his team also added in a flight of Newfoundland taster glasses and local chocolate. Nova Scotia’s women’s team added a unique curling stone to the wide selection of items. “We went to NovaScotian Crystal and they donated a beautiful hand-blown crystal curling rock along with some local beverages.” “It’s wonderful to see everything from all of the different teams for a great cause,” Nova Scotia skip Denise Fitzgerald added.   The 14 men’s and 14 women’s teams are split into two seven-team round-robin pools. After a single round-robin, the top three teams in each pool will make the playoffs. The first-place teams will be seeded directly into the semifinals, Friday, Nov. 25, at 7 p.m. (all times Pacific). The second- and third-place teams will meet in crossover quarter-finals Friday at 2 p.m., with the winners moving into the semis. Selected games from the 2016 Travelers Curling Club Championships will be live-streamed at www.curling.ca/2016travelers/ Scores and standings from the event will be available at www.curling.ca/scoreboard/. For draw times, team lineups and other event info, go to: www.curling.ca/2016travelers/