For Manitoba’s Tracy Andries, the hope is that the second time will be a charm. The skip out of the Fort Rouge Curling Club in Winnipeg is making her second appearance at the Travelers Curling Club Championship. 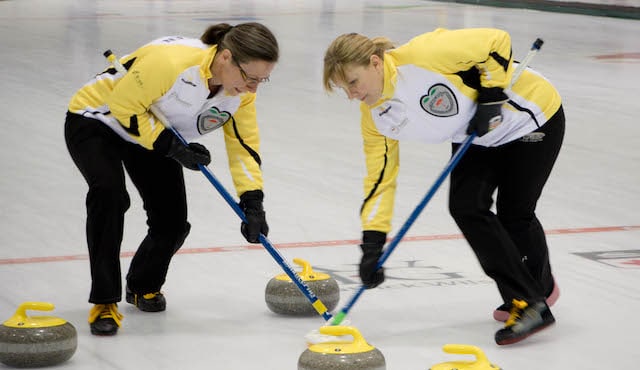 “We’re trying to pull on that first experience and do all we can to improve on it as well,” Andries said Thursday evening. The foursome of Andries, third Crystal Kennedy, second Diane Christensen and lead April Klassen finished the round robin with a 4-2 record. By virtue of pre-game last stone draws to the button, the Manitoba champions advanced straight to the semifinal of the event at the Kelowna Curling Club on Friday evening. The team, with 20 years’ experience playing together, recognize they’re representing a curling powerhouse. “It’s heavy but it’s awesome,” Klassen said of wearing the bison on the back of their jackets. In Pool A women’s action, Alberta’s Morgan Muise emerged out of Pool A with a 5-1 record, as did Nova Scotia and Ontario. Also by virtue of pre-game last rock draw to the buttons throughout the week, Alberta won that tie. Muise and her team of Sara Gartner Frey, Sarah Evans and Lyndsay Allen will advance to the other women’s semi-final Friday at 7 p.m. (all times Pacific) “We rebounded so well after our first loss in the round robin and I’m just so proud of my team,” Muise said with emotion after learning her team had qualified into the semifinal. Alberta and Manitoba will await the winners of the quarter-finals which will run Friday at 2 p.m. In one quarter-final, Newfoundland’s Susan Curtis will take on Ontario’s Julie O’Neill. Nova Scotia will await the winner of a Saskatchewan and Quebec tiebreaker in Friday’s other quarter-final. In men’s playoff qualification, Saskatchewan and Ontario will await the winners of quarter-finals. Manitoba and Nova Scotia have secured their spots in men’s quarter-finals but will have to await the winners of two tiebreakers to know their opponents on Friday afternoon. British Columbia and Yukon will play in one tiebreaker for Pool B, while Alberta and Prince Edward Island will play in the other men’s tiebreaker to determine the Pool A quarterfinal qualifier. The 14 men’s and 14 women’s teams are split into two seven-team round-robin pools. After a single round-robin, the top three teams in each pool will make the playoffs. The first-place teams will be seeded directly into the semifinals, Friday, Nov. 25, at 7 p.m. (all times Pacific). The second- and third-place teams will meet in crossover quarter-finals Friday at 2 p.m., with the winners moving into the semis. Selected games from the 2016 Travelers Curling Club Championships will be live-streamed at www.curling.ca/2016travelers/ Scores and standings from the event will be available at www.curling.ca/scoreboard/. For draw times, team lineups and other event info, go to: www.curling.ca/2016travelers/