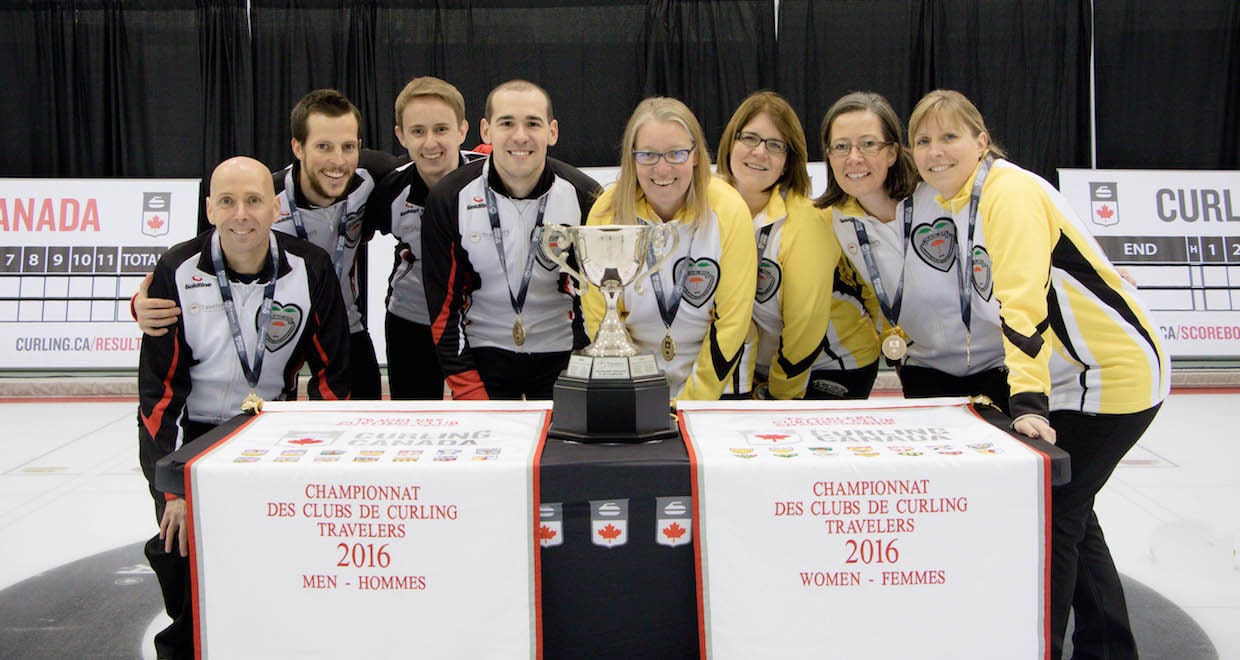 The women out of the Fort Rouge Curling Club in Winnipeg defeated Alberta 8-5 on a last rock hit through a narrow port. “I never thought I’d have a shot to win a national championship but I was comfortable and happy it was that one,” skip Tracy Andries said after the championship win at the Kelowna Curling Club. Andries and third Crystal Kennedy, Diane Christensen and April Klassen have played club curling together for 20 years. The Manitoba champions captured the title in front of close to 50 fans and family members who made the trip to Kelowna. “We’re the best of friends and to have the families here makes it just that much more special,” said Andries who lost the semifinals of the 2014 Travelers Curling Club Championship in Halifax. Alberta’s Morgan Muise and her rink out of the Calgary Curling Club were runners-up. Muise, third Lyndsay Allen, second Sarah Evans and lead Sara Gartner Frey were making their second appearance at a Travelers championship. The Ontario men’s champions went undefeated to capture the 2016 Travelers title. “It’s so cool. Our goal was to just win our club championship and then we started rolling and won Ontario and here we are!” skip Wesley Forget said after defeating Saskatchewan 6-3. Forget’s name will hang on a national banner at the Cataraqui Golf and Curling Club along with second Graham Rathwell and father and son duo of David (third) and Sandy Staples (lead). “I can’t think of another sport where a father and son can play on the same team and win a Canadian title. It’s so special for them and it just has helped with making our team always feel more comfortable,” Forget added. Saskatchewan’s rink of Kory Kohuch, David Kraichy, Wes Lang and David Schmirler were runners-up. This is the second title for Ontario men at the Travelers, the first since the event began in 2009. In the bronze medal games, Quebec’s Nathalie Gagnon rink captured third place over Ontario’s Julie O’Neill’s team in women’s play. Scott Webb’s rink from Alberta defeated British Columbia’s Ron Schmidt’s team to win bronze in the men’s event. The week-long competition offered an elite national championship experience to Canada’s best club curling teams. All 14 of Curling Canada’s Member Associations (10 provinces, three territories and Northern Ontario) were represented in both genders. Each team was allowed only one player who has played in a provincial/territorial Juniors’, Men’s (Brier), Women’s (Scotties) or Seniors’ championship in the current or previous four curling seasons, or participated in a full-field Grand Slam event in the current or previous four curling seasons. As well, no player on the teams can have played in a Canadian Juniors, Men’s, Women’s or Seniors national championship in the current or previous four seasons. Most Valuable Player awards were handed out for both genders. Lonnie Schopp (British Columbia) and Kory Kohuch (Saskatchewan) were chosen by the head official and game umpires. Sportsmanship awards, as voted on by the players, were awarded to Quebec lead Sylvia Cote, Alberta second Sarah Evans, British Columbia third Lonnie Schopp, and Nunavut skip Karielle Mackey. The men’s sportsmanship winners were Prince Edward Island lead Doug MacGregor, Nunavut second Colby O’Donnell, Nunavut third Jeff Nadeau and Manitoba skip Andrew Wickman. The curlers and curling community contributed to a huge off-ice success in Kelowna as well. Over $35,000 was raised through a fundraising challenge to benefit youth curling across Canada through the Curling Canada Foundation. British Columbia’s women’s rink raised the most money and their club, Campbell River Curling Club, will benefit from a $6,000 grant for improvements. Curlers also had the opportunity to participate in a high-performance clinic at the conclusion of the round robin portion of the tournament. The 2017 Travelers Curling Club Championship will take place in Kingston, Ontario at the Cataraqui Golf and Country Club, Nov. 20-25