Morgan Muise had only one word to describe the feeling of advancing to a national final: “Awesome!” The 31-year-old Alberta skip has advanced to the final of the Travelers Curling Club Championship in Kelowna, B.C. after a convincing 7-1 win over Ontario in the women’s semifinal. “We were firing on all cylinders tonight and we hope we can come out like that in the final,” said Muise, who is a program coordinator with the Southern Alberta Curling Association. The Alberta rink of Muise, third Lyndsay Allen, second Sarah Evans and lead Sara Gartner Frey has never played in a national final, but two team members have previous experience wearing the Alberta colours in the same venue where they’ll play for gold on Saturday. Gartner Frey and Allen represented their province at the 1999 Canadian Junior Championship, which was held at the Kelowna Curling Club. The entire team represented Alberta at the 2014 Travelers Curling Club Championship in Halifax where they missed the playoffs. 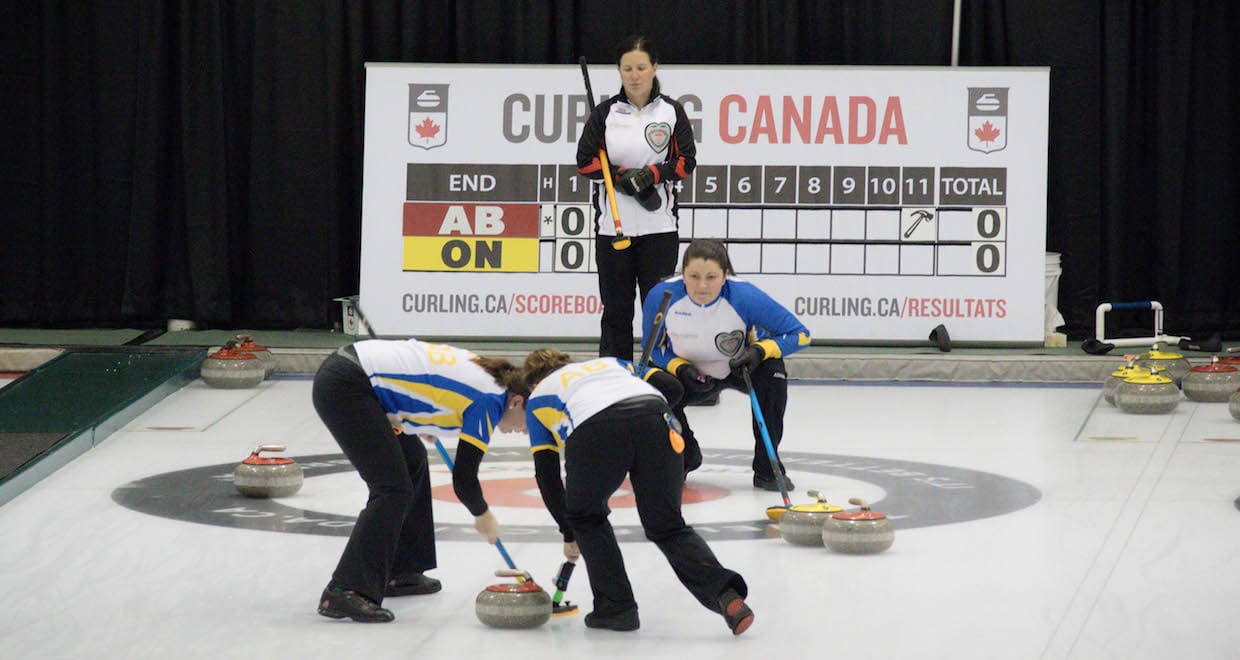 The team out of the Calgary Curling Club will face the Manitoba champions in Saturday morning’s gold-medal game. Tracy Andries’s rink stole their semifinal win over Quebec’s Nathalie Gagnon. The Winnipeg team of Andries, Crystal Kennedy, Diane Christensen and April Klassen have curled together for 20 years. The women’s final goes Saturday at 10 a.m. (all times Pacific). You can watch a livestream of that game at www.curling.ca/2016Travelers Ontario’s Julie O’Neill will take on Quebec in the bronze medal game at 10 a.m. Saturday. Saskatchewan men will be vying for their province’s third Travelers title on Saturday. Kory Kohuch and his Nutana Curling Club team continued their unbeaten run in Kelowna, getting past Alberta 4-3 in the semifinal. Kohuch made a perfect triple on his first rock in the eighth end and didn’t need to throw his last stone. Kohuch and his second Wes Lang and lead David Schmirler won this event in 2014 in Halifax. Third David Kraichy will be seeking his first national title on Saturday. The Saskatoon team will face another unbeaten squad in the gold medal game. Ontario’s Wes Forget’s team put on a hitting clinic in their 6-2 semifinal win against British Columbia to qualify for the gold medal game. “It’s a dream come true,” Ontario third David Staples said after advancing to the final with his teammate and father, Sandy Staples, playing the lead position. The father-and-son duo, along with Forget and Graham Rathwell will be looking to win Ontario’s second title and first since the inaugural year of the championship eight years ago. Alberta and British Columbia will play for bronze in the men’s event on Saturday. Each team is allowed only one player who has played in a provincial/territorial Junior, Men’s (Brier), Women’s (Scotties) or Seniors championship in the current or previous four curling seasons, or participated in a full-field Grand Slam event in the current or previous four curling seasons. As well, no player on the teams can have played in a Canadian Junior, Men’s, Women’s or Seniors national championship in the current or previous four seasons. Selected games from the 2016 Travelers Curling Club Championships will be live-streamed at www.curling.ca/2016travelers/ Scores and standings from the event will be available at www.curling.ca/scoreboard/. For draw times, team lineups and other event info, go to: www.curling.ca/2016travelers/