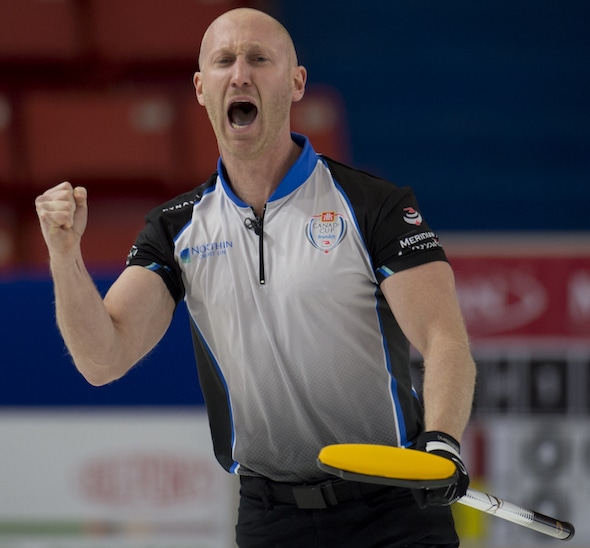 But based on the early evidence at the 2016 Home Hardware Canada Cup, presented by Meridian Manufacturing, this team still plays like it has something to prove.

Wednesday morning at Westman Communications Group Place at the Keystone Centre, Jacobs delivered one of the finest shots of his career, a thin double-takeout with his final throw of the game to score a game-winning deuce for a 5-4 victory over Winnipeg’s Mike McEwen.

Brad Jacobs’ winning shot. Click on the image to see the video.

It was the opening draw of the 2016 Home Hardware Canada Cup, which not only offers a cash prize of $14,000 to the winning men’s and women’s teams, but also sends the winning teams directly to the 2017 Tim Hortons Roar of the Rings Canadian Curling Trials in Ottawa — the event that will decide Canada’s four-player men’s and women’s teams for the 2018 Winter Olympics in PyeongChang, South Korea.

“This is your Trials field for the most part; every single team here is amazing,” said Team Jacobs vice-skip Ryan Fry. “You get a ‘W’, you’re one step closer. You’re just trying to get one game at a time here and that’s all you can do.”

Jacobs threw the rock, but it was a team shot in every sense of the word — he and Fry had to get the line call correct, while the Team Jacobs brotherly front end of second E.J. Harnden and lead Ryan Harnden (Jacobs’ cousins) had to sweep perfectly to make a shot that had dozens of potentially negative outcomes — a shot that reminiscent of Al Hackner’s famous shot to force extra ends in the 1985 Brier final.

Al Hackner’s famous 1985 shot to force extra ends at the 1985 Brier. Click on the image to see the shot

“We do everything as a team out here, and that was a classic team shot,” said Jacobs. “There’s almost zero margin of error on a shot like that, and there’s definitely a little bit of luck involved when you make a precise shot like that to win a game. We got one there that worked out for the best, and I think that’s huge for our team to win a game like that.”

The ensuing celebration showed that Team Jacobs — with coach Caleb Flaxey rounding out the lineup — is still an intense, excitable bunch that’s eager to replicate its 2014 Olympic triumph in Sochi, Russia.

“Absolutely, it’s a thrill — especially in an event like this and a field like this,” said Jacobs. “We know every game is going to come down to the wire, just like that, and every single time you win a game in an event like this it’s huge because you’d don’t know if you’ll win the next one. So we’ll take that and hopefully it’s something we can build some confidence off of, and that it sets us on a roll.” 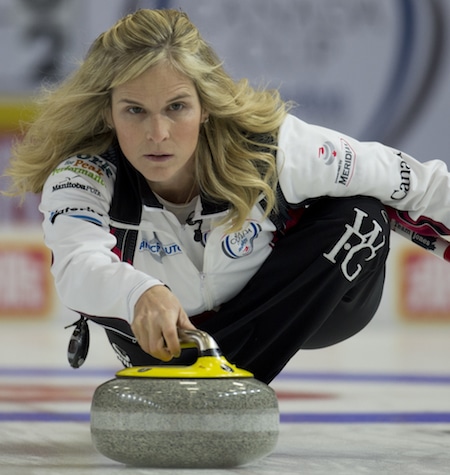 In the other men’s game on Wednesday morning, Winnipeg’s Reid Carruthers scored a crushing four in the seventh end en route to an 8-3 victory over Toronto’s John Epping.