BRANDON, Man. — A winless opening day at the 2016 Home Hardware Canada Cup, presented by Meridian Manufacturing, in the city in which he was born could have put Mike McEwen and his team into a tailspin. 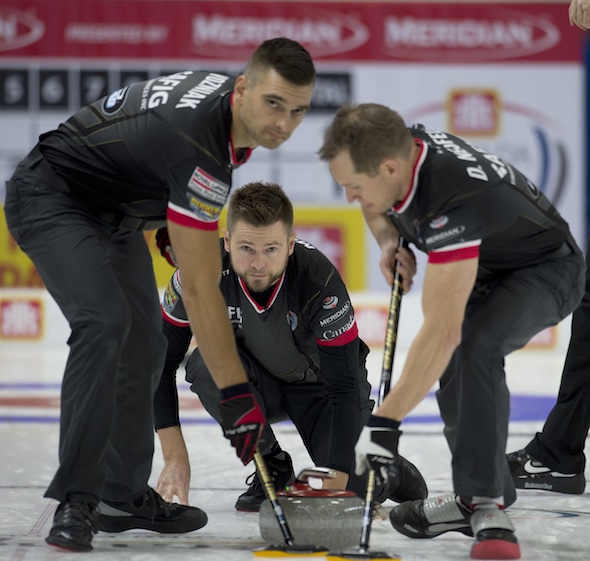 And, in fact, that might have happened to a lot of teams with less experience than McEwen, vice-skip B.J. Neufeld, second Matt Wozniak and lead Denni Neufeld.

Instead, a relatively relaxing Wednesday night produced a splendid bounceback effort on Thursday morning at Westman Communications Group Place at the Keystone Centre — a solid 7-3 win over Toronto’s John Epping in a battle of 0-2 teams.

“Twenty-four hours later and we’re actually still alive,” said a grinning McEwen. “We paid for our hotel bill with that win, so that’s good (teams earn $2,000 per round-robin victory). But, I mean, we played much the same as we did (Wednesday); it was a bit unfortunate what happened yesterday, but today the same performance turned into a much better result.”

There was no formal team meeting Wednesday night; no airing of grievances — just a typical night off spent hanging together with teammates who’ve been together for nine years.

“We’re an old married team,” said McEwen with a laugh. “We just went out for a couple beers and some wine, and today’s a new day. We know how to make ourselves feel better.”

It paid off in a tight game with Epping; McEwen was up 3-2 through six ends, but put the game in the bank with deuces in the seventh and ninth ends, sandwiched around an Epping single.

McEwen is still in the race to make the playoffs — just three of the seven men’s teams will advance — but it’s still a dogfight. Brad Gushue of St. John’s (with Mark Nichols skipping) and Steve Laycock of Saskatoon were idle on Thursday morning; they lead the way at 2-0, and will face off on Thursday afternoon at 1:30 p.m. CST in TSN’s feature game. 2014 Olympic gold-medallist Brad Jacobs of Sault Ste. Marie, Ont. is at 2-1 after a solid 5-1 over defending champ Kevin Koe of Calgary (1-2). Also enjoying a bye on Thursday morning was Winnipeg’s Reid Carruthers (1-1). 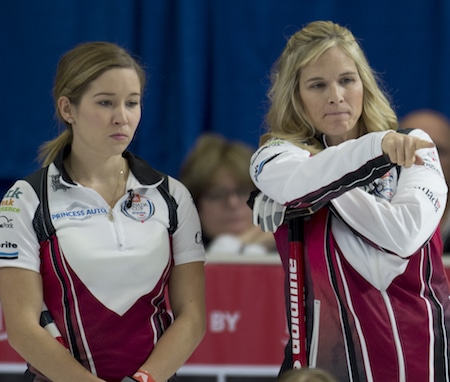 In women’s play, Winnipeg’s Jennifer Jones continues to set the pace, improving to 3-0 with a 12-6 paddling of defending Scotties Tournament of Hearts champ Chelsea Carey of Calgary (1-2). Jones, backed up by third Kaitlyn Lawes, second Jill Officer, lead Dawn McEwen and coach Wendy Morgan, scored four in the first end, stole one more in the second and put it into cruise control.

“We’re right where we want to be,” said Jones. “We had a few sloppy ends in that game, so we’ll want to clean them up for tonight (against defending champ Rachel Homan of Ottawa). It was a fun game; I thought we started off really well and got our rocks into some good spots. We figured out the speed of the ice a little bit better than yesterday, so we’re on the right track. We just need to clean up a few mistakes.”

The other unbeaten women’s team, Winnipeg’s Kerri Einarson (2-0) had a bye on Thursday morning, as did Edmonton teams skipped by Kelsey Rocque (0-2) and Val Sweeting (0-2).