BRANDON, Man. — It’s a Friday night showdown between, arguably, the two most dominant women’s curling teams in the country.

Winnipeg’s unbeaten Jennifer Jones (4-0) will take on Ottawa’s second-place Rachel Homan (4-1) at 6:30 p.m. (all times CST) at Westman Communications Group Place at the Keystone Centre — at stake, first place in the women’s round-robin standings of the 2016 Home Hardware Canada Cup, presented by Meridian Manufacturing and a trip directly to Sunday’s 1:30 p.m. championship game. 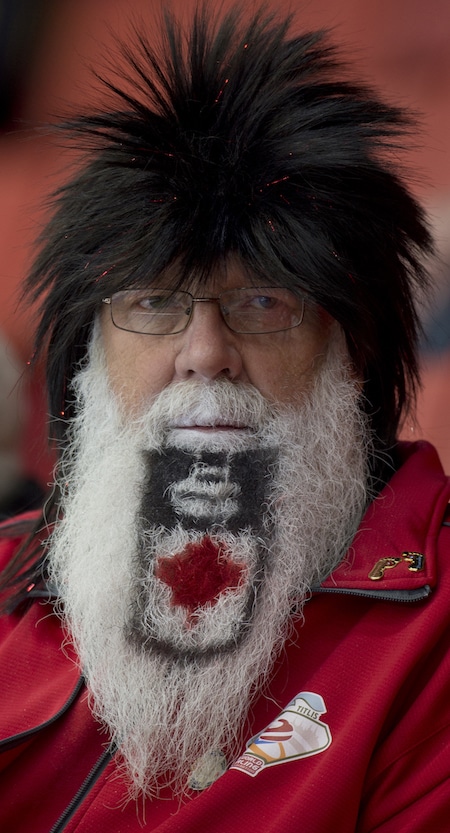 While Team Jones had a bye Friday morning, Team Homan was taking care of business by dispatching Edmonton’s Val Sweeting (2-3), 7-3. Homan, backed up by vice-skip Emma Miskew, second Joanne Courtney, lead Lisa Weagle and coach Adam Kingsbury, took control early in the game with deuces in the first and third ends and never looked back.

“It’s always a nice thing to control your own fate; you don’t want to rely on other teams,” said Homan, the reigning Home Hardware Canada Cup champion. “So we’re in a good position right now. We have a big game tonight, so now we can rest up for that.”

Tonight’s loser is assured of no worse than a berth in Saturday’s 1:30 p.m. semifinal, and Homan is ready for either scenario.

“I don’t know how critical the bye is; I mean, it’s nice to play on Saturday, too,” she said. “There’s ups and downs to both. We’d love to be in the final and prepare for that, but we’d be just as happy to prepare for Saturday.”

The men’s and women’s champions of the Home Hardware Canada Cup earn $14,000 plus $2,000 per round-robin victory, but the big prize is a berth in the 2017 Tim Hortons Roar of the Rings Canadian Curling Trials 12 months hence in Ottawa, where Canada’s Olympic four-player teams will be decided.

But Teams Homan and Jones locked up their Trials berths last season, so the cash, plus a trip to Las Vegas in January to be part of Team North America at the 2017 World Financial Group Continental Cup, presented by Boyd Gaming, are the big prizes available on Sunday.

If Jones or Homan win on Sunday, the Trials berth will go to the highest non-qualified team on the 2016-17 Canadian Team Ranking System as of May 1, 2017.

In the other women’s game Friday morning, Calgary’s Chelsea Carey (2-3) kept her slim playoff hopes alive with a 7-4 victory over Tracy Fleury of Sudbury, Ont. (2-3).

Winnipeg’s Kerri Einarson (2-2) was idle on Friday morning, and can lock up the other semifinal berth with two wins later on Friday. If she loses, the three-loss teams — Carey, Fleury and Sweeting — are in the mix for a tiebreaker.

On the men’s side, both games ended with surprising misses — from defending champ Kevin Koe of Calgary in one and from home-province favourite Reid Carruthers of Winnipeg in the other.

Koe was drawing for a single point to force extra ends against Team Brad Gushue of St. John’s but was heavy, allowing the easterners to steal an insurance point for a 5-3 win, eliminating Team Koe (1-4) from playoff contention. 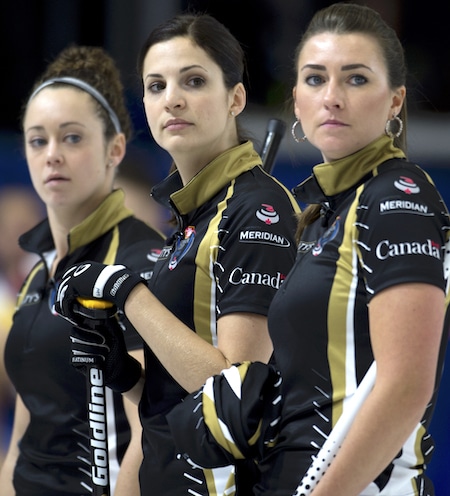 Even with Gushue in dry-dock due to his hip injury, fill-in skip Mark Nichols, backed by spare vice-skip Charley Thomas, second Brett Gallant, lead Geoff Walker and coach Jules Owchar, has his team at 4-1 and one victory away from clinching a spot in Sunday’s 6:30 p.m. men’s final; the team already is assured of a spot in Saturday’s 6:30 p.m. semifinal.

“That was a really well-played game, I thought, and a good bounceback for me after last night (a loss to Toronto’s John Epping in which Nichols struggled at times,” said Nichols, who completes round-robin play Friday afternoon at 1:30 p.m. against Winnipeg’s Mike McEwen (1-3). “It was good to get that win.”

Nichols clearly looks comfortable calling the shots, but it’s still a grind, he admitted with a laugh.

“Like I’ve said before, I don’t mind it,” he said. “I enjoy third and I think my skill-set is better there, but it’s satisfying to know that we’re here competing against the best in Canada and doing well.”

In the other men’s game Friday morning, Saskatoon’s Steve Laycock was a 5-3 winner after the Carruthers last-rock miss, leaving both teams at 3-2.

“We were getting outplayed pretty bad in that game and we escaped a few jams and got a steal in a couple situations when it looked like we’d get toasted for a big end,” said Laycock. “But we’ve had games here where we’ve played well and haven’t won, and here’s one where we didn’t play so good and ended up winning.”

Brad Jacobs of Sault Ste. Marie, Ont., sits at 3-1 after having the bye on Friday morning. His team takes on Carruthers Friday afternoon, and a win would put Team Jacobs in the semifinal.