Teams from Manitoba and Ontario won the championship trophies at the 2016 Travelers Curling Club Championship last month, in Kelowna, B.C., but the winning didn’t stop there. 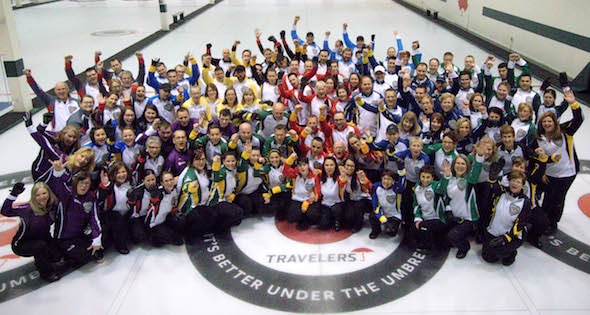 The 2016 For The Love of Curling Fundraising Contest, which ran in conjunction with the 2016 Travelers Curling Club Championship, raised nearly $40,000 to support youth curling across Canada.

All 28 participating teams (14 men, 14 women) were able to take part, and the teams that raised the most money earned cash grants for improvements to their home curling centres.

The money raised will contribute to youth curling scholarships, as well as to the popular Egg Farmers Rock & Rings, presented by Curling Canada, program, which brings the sport of curling to school gymnasiums across Canada to give many youngsters their first exposure to curling.

Kim Jonsson’s B.C. women’s team came away with the top prize of a $6,000 grant for the Campbell River Curling Club after raising $6,250.

“It was wonderful to see the players in Kelowna making this fundraiser so successful,” said Katherine Henderson, Chief Executive Officer of Curling Canada. “It showed once again why our sport is so special — these players were competing for a Canadian championship, but at the same time they saw the value of continuing to grow our game.”