LAS VEGAS — Both the reigning world men’s and women’s curling champions will be on the ice on Thursday morning to kick off the 2017 World Financial Group Continental Cup, presented by Boyd Gaming. 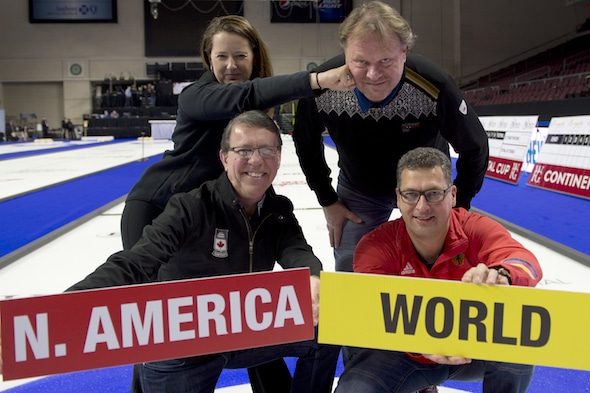 Mixed doubles competition gets underway Thursday at 1:30 p.m., with the most interesting matchup looking like Team North America’s tandem of leads, Ben Hebert and Dawn McEwen, taking on the duo of Ulsrud and Japan’s Yurika Yoshida.

On Friday at 1:30 p.m., the husband and wife pairing of Jones and Brent Laing takes on another Norway-Japan combination in Mari Motohashi and Christoffer Svae.

The mixed doubles draws are at 1:30 p.m. on Thursday and Friday, and 9 a.m. on Saturday. The Saturday draw will see teams switched after four ends, as the 12 remaining players for each team who haven’t played mixed doubles will get in the ice for the final four ends.

The unique format pits Team North America against Team World in various disciplines during four days of competition — traditional team games, mixed doubles, mixed skins and standard skins games. Each segment awards points for wins (or ties). A total of 60 points are available, meaning the side that earns more than 30 points will be declared the champion.

There will be 18 team games (nine men’s and nine women’s) played, each worth one point for a win and a half-point for a tie.

For the first six mixed doubles matches, one point will be awarded for each victory, one-half point if tied. Those totals will be doubled for the 9 a.m. draw on Saturday.

All games are eight ends and there are no extra ends.  There will also be six skins games (those matchups will be decided on Saturday), with each game worth a total of five points to the winner.

TSN (RDS2 in French), the exclusive television network for the Curling Canada’s Season of Champions, will provide complete coverage of the World Financial Group Continental Cup. As well, games will be streamed live in the U.S. on ESPN3