After a rough morning at the Orleans Arena during which Team World won two traditional team games and tied another, Team North America bounced back with two emphatic mixed doubles victories to cut Team World’s overall lead to 3.5-2.5 in the four-day competition.

A total of 60 points are available, meaning the first team to 30.5 points will claim the World Financial Group Continental Cup title.

The all-leads North American duo of Dawn McEwen and Ben Hebert scored three in the first end and four more in the third en route to a 10-5 victory over Norway’s Thomas Ulsrud and Japan’s Yurika Yoshida, while a pair of vice-skips — Kaitlyn Lawes and Marc Kennedy — romped to an 11-4 victory over Denmark’s Rasmus Stjerne and Switzerland’s Christine Urech.

Hebert said there was some pressure on the North American duos to get some points back.

“We talked about it in the dressing room, how important it was to get off to a good start, and this morning we didn’t,” said Hebert. “So to win two out of the three mixed doubles games, and win them the way we did, it sent a little message that we’re not going away yet. Hopefully we can keep it up.”

“I just think our experience and getting a chance to play together in the past year has made a big difference,” said Kennedy. “Learning the strategy and getting to know each other a bit better, it makes all the difference in the world out there. We’ve gotten better over the years, for sure.” 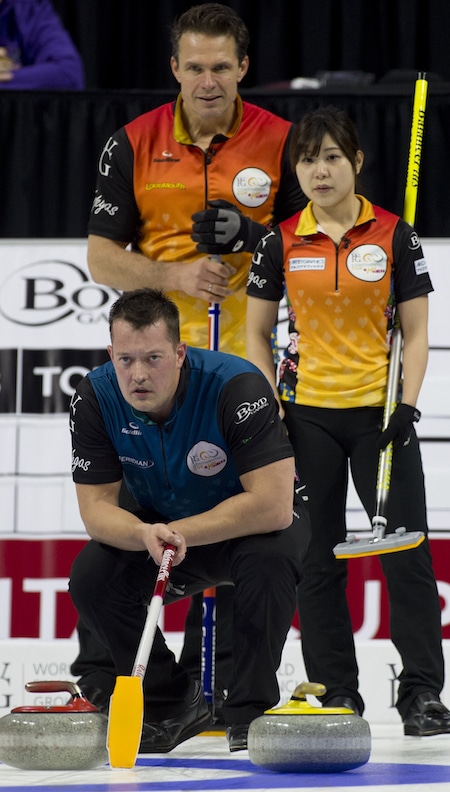 It helps, certainly, to have draw weight in your hip pocket — something that’s an absolute requirement in mixed doubles, a discipline that puts greater emphasis on rock placement. Mixed doubles will make its debut as an Olympic medal sport in 2018 at PyeongChang, South Korea.

“We didn’t make too many hits, but we lobbed ’em in there pretty good,” said Hebert with a laugh. “Mixed doubles is a draw game; Dawn set them up early and I cleaned ’em up. Thanks for coming out.”

The Swedes prevented the clean sweep for North America, sparked by Hasselborg — the rookie who capped a perfect day (her team won on Thursday morning) with a 95 per cent shooting game.

“Beginner’s luck, I guess,” said a smiling Hasselborg. “But it’s a lot of fun to play in front of this crowd. It’s amazing.”

Added Eriksson: “She made us look really good as a team.”

The 2017 World Financial Group Continental Cup continues Thursday with the second round of traditional team competition, at 6:30 p.m. (all times Pacific).