LAS VEGAS — The rookie came through in style for Team World on Thursday morning at the 2017 World Financial Group Continental Cup, presented by Boyd Gaming. 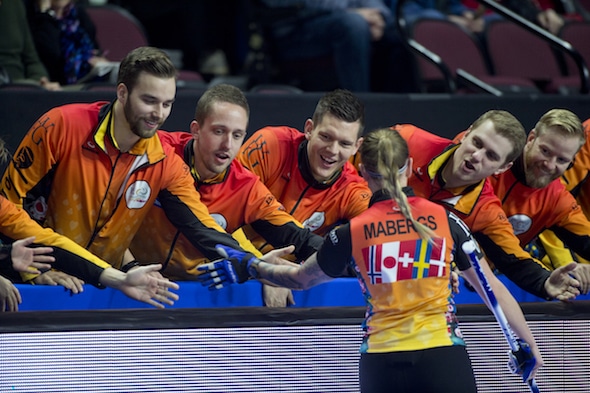 The win by Team Hasselborg — backed up by vice-skip Sara McManus, second Agnes Knochenhauer and lead Sofia Mabergs — helped Team World race out to an early lead at the Orleans Arena. In a bid to end a four-year losing streak, Team World won two of the three games on Thursday morning, and earned a half in the other to take a 2.5-0.5 lead. The first team to 30.5 points will win the WFG Continental Cup. 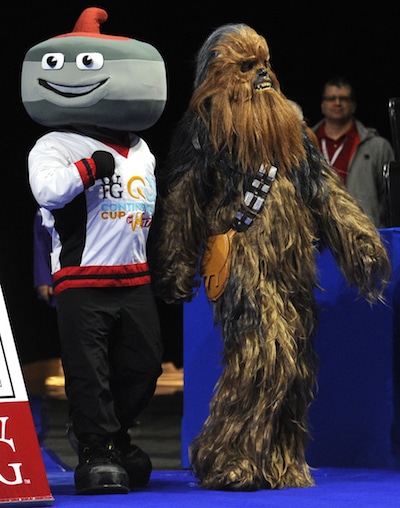 Slider made himself a new friend on Thursday morning at the World Financial Group Continental Cup. (Photo, Curling Canada/Michael Burns)

“It’s for sure one of the biggest crowds we’ve ever played in front of, and to be a rookie team and go out here and open the WFG Continental Cup feels amazing,” said Hasselborg. “And then to come out on top, it’s a great feeling.”

“We had lots of fun out there,” said Team Feltscher vice-skip Irene Schori, another first-time participant. “It’s a dream come true to play in the World Financial Group Continental Cup; we are very proud to be here.”

The Feltscher team was eager to get on the ice against Jones’s Winnipeg team, which qualified for the WFG Continental Cup last month by winning the 2016 Home Hardware Canada Cup women’s title in Brandon, Man.

“We’ve played her twice this season (both victories for Team Feltscher) and we know them very well,” said Schori. “It’s always fun to play against Jennifer.”

The reigning world men’s champs, Team Kevin Koe from Calgary, salvaged half a point for Team North America to avoid a Team World sweep. Koe, with third Marc Kennedy, second Brent Laing and lead Ben Hebert, made an open hit for a deuce in the eighth and final end to pull out a 5-5 tie against Norway’s Thomas Ulsrud in the final game on the ice and, rest assured, Koe was aware of what had transpired in the other two games. 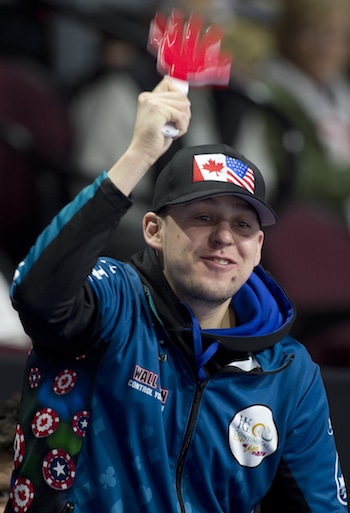 “It’s one of the only events where you can watch the other sheets and not feel bad,” said Koe. “But we played great; I thought we totally outplayed them.

“It is huge, especially with us losing a couple. And for our team, confidence-wise. We played well; tie game against a good team, we have to take it. Obviously we’ve been struggling a bit as a team lately, but we’ve been putting in a lot of hard work. This was one of our better games in a while, and it should be good if we can play that way the rest of the week.”

The 2017 World Financial Group Continental Cup continues Thursday with the first round of mixed doubles competition, at 1:30 p.m. (all times Pacific).