LAS VEGAS — After years of watching the event on television, Chelsea Carey probably had a good idea of what to expect in her first World Financial Group Continental Cup.

But as she prepared for her first action in the 2017 renewal of curling’s version of the Ryder Cup on Thursday night at the Orleans Arena, Carey was struck by the difference in the emotions she was feeling.

“I was way more nervous before that game than I’ve been for a long time, and more than I expected to be, too,” said the reigning Scotties Tournament of Hearts Canadian women’s champion from Calgary. “It’s really fun to be part of a bigger team, but there’s a lot more pressure on you that way, too. You’re not just letting yourself down if you lose, but everybody and it puts us in a hole. So I felt a lot of pressure for the first little bit there, but we settled in and stayed in there. This whole bigger-team concept is great; I’m loving that.”

Despite a night of frosty ice conditions produced by a rare rainy night in Las Vegas, Carey, with vice-skip Amy Nixon, second Jocelyn Peterman and lead Laine Peters was able to give Team North America a much-needed point with an 8-6 win over Team World’s Satsuki Fujisawa of Japan in the evening traditional team-game draw.

That capped the first day of action, and left Team North America and Team World in a tie, each team with 4.5 points. The first team to crack the 30.5-point barrier will claim the WFG Continental Cup.

Team Carey had a 4-0 lead through two ends, but the Japanese clawed back with a point in the third end and a steal of three in the fourth as Carey couldn’t solve the frosty ice with her final shot.

But deuces in the sixth and eighth ends got the job done for Team Carey, and helped North America pull into the tie after trailing following the morning draw (2.5-0.5) and afternoon draw (3.5-2.5). 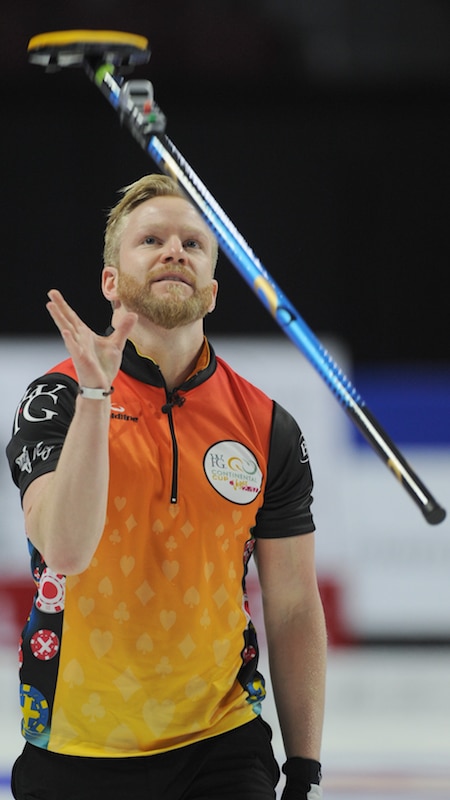 “That was huge,” said Carey. “We don’t need a big lead; we just don’t want to give one up. So it was a little scary after the morning draw, but a couple good battles in the (afternoon) mixed doubles games and the draw tonight was helpful. Hopefully we can come out of the game stronger tomorrow morning and see what happens from there.”

Carruthers was able to recover from a shaky first four ends to take over the game in the second half.

“I was definitely not making my shots early; the guys were actually playing really well, and I had some chances to put some pressure on them, but (Stjerne) was definitely outplaying me,” said Carruthers. “But I think the second half of the game swung in our favour.”

Edin, who with his World teammates is seeking to snap a four-year losing streak, said his team was satisfied with the first day of competition.

“I think we have to be happy with the first day,” said the two-time world champ. “I think we played really well. Everyone is into it now, we’re sticking together as a team and I think everybody is looking forward to playing tomorrow.”

The 2017 World Financial Group Continental Cup continues Friday with traditional team games at 9 a.m. and 6:30 p.m. (all times Pacific), with a mixed doubles draw at 1:30 p.m.