But those struggles appear to have been left behind if their performance to date at the 2017 World Financial Group Continental Cup, presented by Boyd Gaming, is any indication.

It was the lone North American victory on Friday night in traditional team play; Team World prevailed in the other men’s game, with Norway’s Thomas Ulsrud bouncing Heath McCormick of the U.S. 7-3, while the other game was halved: Sweden’s Anna Hasselborg stole a point in the eighth and final end to pull out a 6-6 tie with Team North America’s Jennifer Jones of Winnipeg. 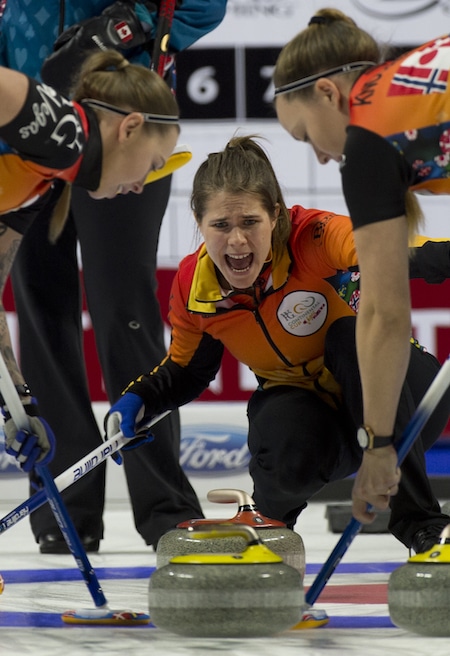 The results maintained Team North America’s narrow lead in this four-day competition in which the first team to surpass the 30.5-point plateau takes home the WFG Continental Cup; Team North America takes a 10-8 lead into Saturday.

The Koe team has been hugely successful by some teams’ standards — a 34-9 overall record on the World Curling Tour with two WCT victories. But, team members readily admit, not by their own standards, making the success here this week especially gratifying.

“Especially with a bigger team — there’s more pressure and you want to do well here,” said Laing. “You don’t want to ever lose to Team World, so it’s nice to put a couple good games together and hopefully it’s the start of something good for us to get on a roll. We know we’re still capable; we just haven’t played our best very often this year. We know what we have to do to get better and we’re doing those things.”

Cumulatively in its two team wins, Team Koe is shooting 88 per cent — six points better than the next best teams, skipped by Ulsrud and Reid Carruthers.

Laing had to bounce back from a disappointing — and, he admitted, physically taxing mixed doubles loss with his wife Jones on Friday afternoon.

“The mixed doubles is actually more tiring than the regular games,” said Laing. “You have more help out there (in team play), you can shut your brain off for a minute or two, and in the mixed doubles you can’t. It’s a shift of gears, but you know what you have to do to get ready for a regular game, so it’s not too hard.”

Jones wasn’t so fortunate in her bounce back game; she had an open hit for a win against Hasselborg but rolled out her shooter to gift a half-point to Team World.

“You can’t count on that, but the ice was a little bit tricky and we were struggling in the beginning,” said Hasselborg, who surrendered a tough stolen point to Jones in the fourth end to put the Canadians up 4-1. “But we managed to take two deuces with the hammer (in the fifth and seventh ends), and when it comes down to the last end, anything can happen.”

Ulsrud, meanwhile, was able to bounce back from giving up a first-end deuce to McCormick by scoring singles in the second and third ends, and then stealing three in the fifth, helping Team World’s bid to snap a four-year losing streak at the WFG Continental Cup.

“We’re keeping it close, at least, so we have a shot at the end,” said Ulsrud with a smile.

The 2017 World Financial Group Continental Cup continues Saturday with the final two rounds of traditional team play, at 1:30 p.m. and 6:30 p.m. (all times Pacific). Before that, mixed doubles play wraps up with a 9 a.m. draw, with each game worth two points in the standings. Additionally, the pairings will be shuffled at the fourth end break to make sure every player on both teams gets a shot at mixed doubles competition.

Also on Saturday, the captains and coaches for both teams will announce their lineups for Sunday’s two skins draws, where 30 points will be up for grabs.