LAS VEGAS — The drive for five is alive and well.

Team North America picked up another two points on Saturday night at the Orleans Arena in the final traditional team-play round of the 2017 World Financial Group Continental Cup, presented by Boyd Gaming.

Those points put the home team on the verge of a fifth consecutive title in curling’s version of the Ryder Cup. Team North America will take a 19-11 lead into Sunday’s two rounds of skins competition.

But keep in mind that those two rounds will have 30 points up for grabs, meaning a Team World comeback is hardly out of the question. The first team to crack the 30.5 barrier on Sunday will lay claim to the WFG Continental Cup. 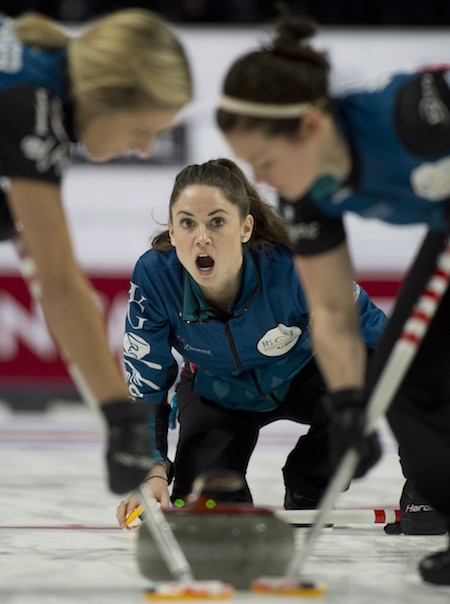 “The pressure’s going to be on tomorrow,” said Winnipeg’s Reid Carruthers, moments after polishing off an impressive 7-5 triumph over Team World’s Thomas Ulsrud of Norway. “We were starting to feel it tonight. We saw a couple little nervous throws, we’ll say, out there. The race is to 30.5, and we’re inching our way there.”

Carruthers surrendered a first-end deuce to the 2014 world men’s champion, but took control from there by tying things up with two of his own in the second end thanks to a marvellous angle-raise takeout, followed by a steal of one in the third and two more in the fourth.

He’ll be in the evening skins game, which may change his strategy depending on the results of the afternoon games.

“It’ll be interesting,” said Carruthers. “I’ll have to wait and see what the score is, and that might dictate the way I play overall. I really can’t give an answer about what we’re going to do.”

A sheet over, Jamie Sinclair of the U.S. got into the win column by dispatching reigning world champ Binia Feltscher of Switzerland 6-2, while Sweden’s Niklas Edin prevented the home team sweep by scoring a 5-2 win over reigning world men’s champ Kevin Koe of Calgary. 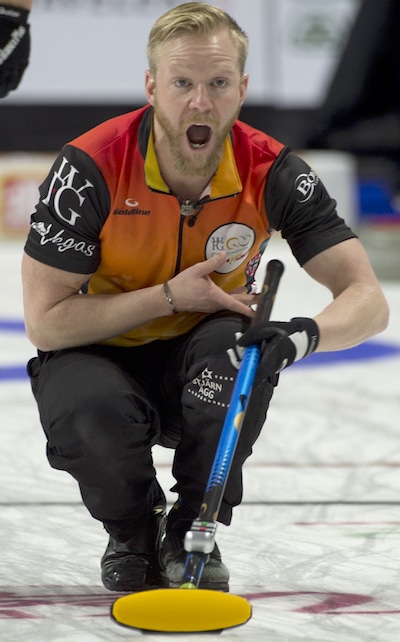 “We have to get every point we can from now on, and we were fortunate to get this one,” said Edin. “I think we were the better team but they still had a chance to win the game. I was happy to win it.”

Team World would likely benefit from building up some carry-overs during the skins games (the skin totals build up if neither team wins a skin in each end), suggested Edin.

“We’re so far behind now, I think we almost have to go for carry-overs,” he said. “But again, that’s easier said than done. They’re going to do anything they can to score (to prevent carry-overs). It’s not going to be easy, and if we have a chance of taking a point, we’ll take it. But it wouldn’t hurt to get a few carry-overs.”

Here are the matchups for Sunday’s skins games: