Canada’s national wheelchair curling team will be aiming not only for a world championship gold medal, but also to get some 2018 Paralympic Winter Games momentum when the 2017 World Wheelchair Curling Championship takes place in March. 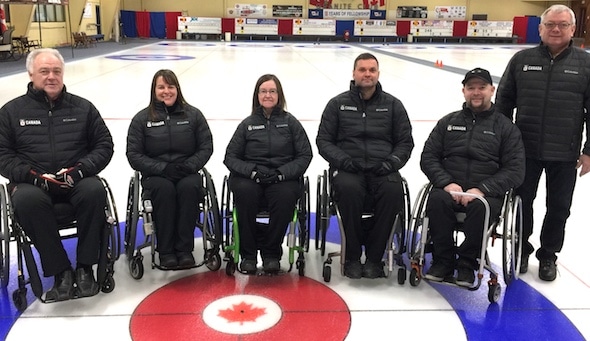 The Canadian team — announced today by Curling Canada — will feature a blend of experience and new faces as Canada, ranked No. 2 in the world in wheelchair curling, takes aim at a leading fourth gold medal; currently, Canada is tied with Russia with three gold medals apiece in the 11-year history of the event.

The 2017 World Wheelchair Curling Championship is scheduled for March 4-11 in Gangneung, South Korea, and will be the test event for the 2018 Winter Paralympic competition, which will be staged in the same building.

The man who skipped Canada to all three world titles, as well as two Paralympic gold medals, Jim Armstrong of Cambridge, Ont., is back at the helm of Team Canada.

“I really like the looks of our team,” said Kiel. “Jim’s experience speaks for itself, as does that of Mark and Ina, who all played a significant role in winning gold in 2014 at Sochi and have continued to work hard to raise their games. At the same time, Marie and Ellis have taken so many strides as we went through the process of picking our team through the fall and early winter, and I know they’re excited about this opportunity; their enthusiasm is rubbing off on all of us.”

Team Canada will be in Regina this week for a training session that will include a series of games against the reigning Canadian wheelchair curling champions, skipped by Darwin Bender.

With Wright moving from Team Bender to Team Canada, Tull will take her place on Team Bender.

The 2017 Wheelchair Worlds were to be the final event to determine the field that will play at the 2018 Winter Olympics in PyeongChang. The combined results of the 2015, 2016 and 2017 World Championships decide the 11 teams that will play alongside the host South Korean team in 2018.

But based on the previous two years’ results, along with the makeup of the field for the 2017 Worlds, the field for 2018 is all but locked down, with Canada in the mix to take aim at our fourth consecutive Paralympic gold.

“We’re excited that we can start the planning process for PyeongChang 2018,” said Kiel. “There’s always a lot of pressure on Canada at the Paralympics, and I know that our Canadian athletes will be preparing harder for ever as they go through the selection camps next fall.”

Canada is looking for its first world championship since 2013 at Sochi, where Armstrong, Forrest and Ideson teamed with Dennis Thiessen and Sonja Gaudet to claim gold.

Last year in Lucerne, Switzerland, Canada, featuring the same five players as in 2013 (that team also won the 2014 Paralympic gold medal) missed the playoffs with a 3-6 record.

Canada’s previous gold medals were in 2009 at Vancouver and 2011 at Prague. Armstrong and Forrest were members of all three teams,

For more information about the 2015 World Wheelchair Curling Championship, go to: www.worldcurling.org/wwhcc2017