VICTORIA — Normally, after a win like the one Prince Edward Island’s young skip Lauren Lenentine put together Saturday to open the 2017 Canadian Junior Curling Championships, presented by Ambrosia Apples, she might be looking for a teammate, a coach, a family member with whom to celebrate. 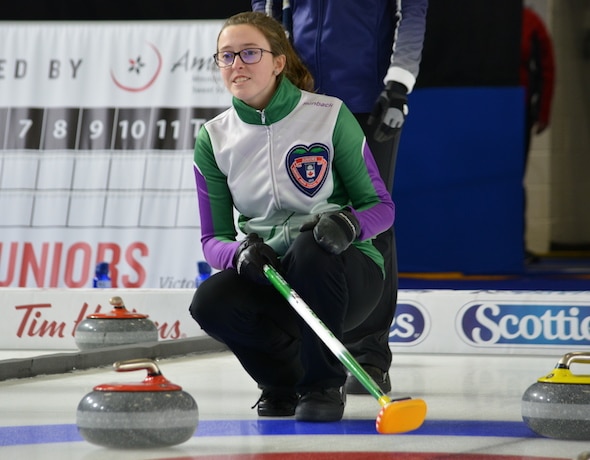 But after knocking off three-quarters of the reigning world junior women’s champions from Nova Scotia, now skipped by Kristin Clarke, on Saturday at the Archie Browning Sports Centre, all Lenentine wanted was a pillow to take a nap.

“Yeah, that hurt the head; it was hard on the heart, too,” said the smiling Lenentine, just 16, after her surprising 6-4 victory. “They’re the world champions, right? We’ve played them a couple times this year, and we’ve been really close. And we knew it would be hard.”

It was indeed; in fact, Lenentine, vice-skip Kristie Rogers, second Breanne Burgoyne, lead Rachel O’Connor and coach Pat Quilty needed an extra end to beat Nova Scotia (last year’s Canadian and world championship team was skipped by Mary Fay, who has taken a break from curling to pursue her education).

But after Clarke was light on her draw to score two for the win in the 10th end, Lenentine and her Cornwall Curling Club team made no mistake in the 11th; Clarke’s last-rock guard overcurled, giving Lenentine an open hit for the victory.

It was Lenentine’s first win over Clarke after two last-rock losses earlier this season, and their past history made the prospect of playing the defending national and world champs in the opening draw of the 2017 Canadian Juniors less daunting, said Lenentine.

“We’ve played them, they’re familiar to us, so that was a good thing, just knowing who we’re playing and how they play,” said Lenentine. “And we knew we could probably stay with them.”

It was a brilliant opening afternoon for Island curling fans; one sheet over, Tyler Smith’s Charlottetown team turned back Quebec’s Vincent Roberge (Lévis) 7-5.

“It’s really nice to see both of us getting wins in our first games; it takes a bit of stress off us, knowing that we can compete,” said Lenentine. “We’re underdogs in P.E.I.”

Another former Canadian junior women’s champ, meanwhile, also was pushed hard before pulling out a victory.

B.C.’s Corryn Brown (Kamloops), who won the 2013 national title at Fort McMurray, Alta., scored a clutch eighth-end deuce and hung on for a 4-3 win over Northern Ontario’s Krysta Burns (Sudbury).

In other women’s play, Manitoba’s Laura Burtnyk (Winnipeg) scored three in both the second and seventh ends en route to a 9-2 triumph over Zoey Walsh of the Northwest Territories (Hay River); and New Brunswick’s Samantha Crook (Fredericton) scored deuces in three of the first four ends to beat Yukon’s Alyssa Meger (Whitehorse) 10-4.

In men’s action, meanwhile, Manitoba’s JT Ryan (Winnipeg) bounced back from giving up a steal of two in the sixth end by scoring three in the ninth for an 8-5 triumph over Newfoundland/Labrador’s Greg Blyde (St. John’s); Nova Scotia’s Matthew Manuel (Halifax) stole one in the ninth and three in the 10th for a 9-3 win over Saskatchewan’a Rylan Kleiter (Saskatoon); and Alberta’s Colton Goller (Calgary) stole four in the third end and singles in the fourth and fifth ends for a 12-3 victory over Sawer Kaeser of the Northwest Territories (Fort Smith).

Action at the 2017 Canadian Juniors continues Saturday with the final draw of the day at 6:30 p.m. (All times PST).