VICTORIA — A year removed from a silver medal at the Canadian Junior Curling Championships, Tanner Horgan arrived in Victoria with not just a Northern Ontario moose emblem on his back. 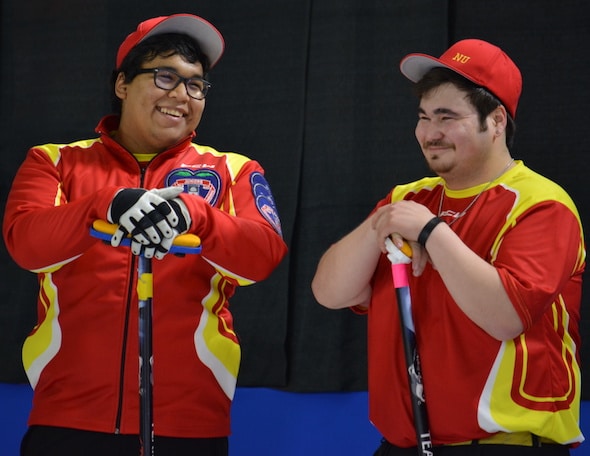 Arthur Siksik and Tyson Komaksiutiksak of Team Nunavut were having a good time Saturday night at the Canadian Juniors. (Photo, Curling Canada/Al Cameron)

If you look closely, you might also see a target — that goes with the territory of being one of the favourites to be taking part in next weekend’s playoffs at the 2017 Canadian Junior Curling Championships, presented by Ambrosia Apples.

“It’s a little different,” admitted the 18-year-old Laurentian University student, whose Copper Cliff team — third (and younger brother) Jacob Horgan, second/vice-skip Nick Bissonnette, lead Maxime Blais and coach/dad Gerry Horgan — opened the Juniors with an 8-4 win over Nova Scotia’s Matthew Manuel (1-1; Halifax). “We’ve felt it locally, and we’ve felt it playing at events in southern Ontario. But this is very new to us, being a favourite at an event of this calibre. I feel like everyone kind of knows us, but it’s the same old, same old — you just have to go out and play your game, stay in your own zone.”

That was the case on Saturday evening at the Archie Browning Sports Centre, as Team Horgan, who lost the 2016 final to Manitoba’s Matt Dunstone, looked extremely comfortable in dispatching Nova Scotia.

“It’s huge; you always want that first one,” said Tanner Horgan. “It’s tough in any competition to start off with a loss; it’s one less win that you have to get along the way, and it’s just a huge confidence builder going into the next one. And they’re a good team; they’re one of the teams we knew we had to beat to move on in our pool, so it was good to start off with a win against those guys.”

There is one significant different from last year, though. Jacob Horgan is still throwing third, but is now sweeping for his brother’s deliveries instead of holding the broom. Bissonnette replaced him at a junior event in Ottawa earlier this season, but it was only because he was too ill to sweep.

“It wasn’t so much a thought-out thing,” said Tanner Horgan. “But when Nick was put in the house with me we rattled off five wins in a row and won the ’spiel. It just kind of stuck, and we’ve had success ever since then.”