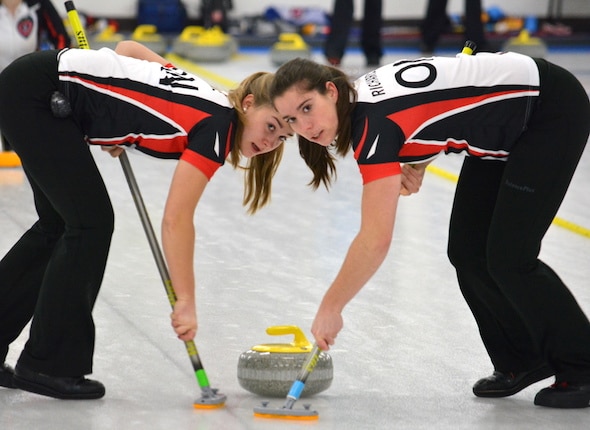 Armstrong, 20, and her Ontario team from the Rideau Curling Club in Ottawa weren’t just leading their game at the 2017 Canadian Junior Curling Championships, presented by Ambrosia Apples. They were leading it comfortably. Not an ounce of tension to be found.

Compared to the route Team Ontario took to get to the 2017 Canadian Juniors, its experience to Victoria has been a walk in the park.

On three occasions during the playdowns, Team Armstrong (a first-year lineup) found itself on the verge of having its national championship dreams dashed.

Early in the Ontario challenge round (a last-chance qualifier to get to the provincial championship), Armstrong was down two playing the 10th end; she scored three for the victory to stay alive in a loser-out game.

That, said Armstrong, may have been the turning point in her team’s season.

“We lost our first game and we knew we had to win three in a row to get to provincials,” she said. “But we pulled together as a team. Once we got that first win, we said, ‘You know what? We’re just going to go all the way.’ ”

That sense of destiny was heightened at the Ontario junior championships in Russell.

In the semifinal against defending champ Courtney Auld, Armstrong rallied from a 7-2 deficit through six ends to tie the game 9-9 after nine ends, then stole the winning point in the 10th.

And in the final against Emma Wallingford, Armstrong was down two with hammer in the 10th and made a delicate come-around tap to score three for the win and provincial title (CLICK HERE to see the shot).

Armstrong is quick to point to her team’s work with coaching legend Earle Morris as a big factor in its mental toughness this season, and the results are on display this weekend in Victoria, where Armstrong and her teammates are having the time of their lives.

“It’s an amazing experience,” she marvelled. “I love the ice, the rocks are awesome, and just all the lights in the arena, the fans, the atmosphere. It’s wonderful.”