Defending champs still in the hunt at 2017 Canadian Junior Championships

When Kristin Clarke and her Nova Scotia team gave up four points in the sixth end to Manitoba’s Laura Burtnyk on Tuesday night, she was in the very odd position of considering that outcome extremely favourable. 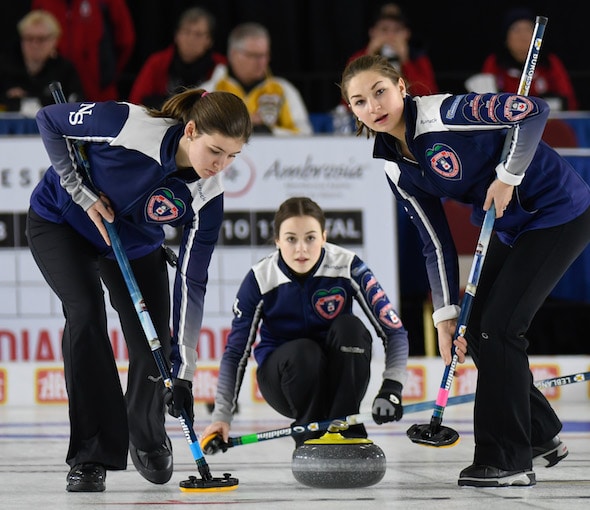 The alternative? Quite likely a very real shot at an oh-so-rare perfect eight-ender for Burtnyk.

Instead, Clarke made arguably the most clutch shot to date of the 2017 Canadian Junior Curling Championships, presented by Ambrosia Apples — a perfect freeze into a pocket of Manitoba stones that left Manitoba sitting only three. Burtnyk would make the draw for four to take a 6-4 lead. But the reigning Canadian and world champion Nova Scotia foursome arguably had more reasons to celebrate.

There were even more reasons an hour later as Nova Scotia would score a go-ahead three in the eighth end, hold Manitoba to one in the ninth and score the winning point in the 10th for an 8-7 triumph that kept its fleeting hopes alive for back-to-back national titles.

“Unfortunately giving up four (in the sixth end) was the best-case scenario for us. At that point, it was basically give up four or give up eight. And we opted to give up four,” said a relieved Clarke, whose team hails from Chester. “Honestly, I was pretty pumped up. We knew that if we could force them to four, as silly as that sounds, we’d still be right in it, down two with hammer. So I was like, let’s make this, let’s go.”

They did, and as a result, Nova Scotia will play Newfoundland/Labrador’s Brooke Godsland (St. John’s) at 9 a.m. (all times Pacific) Wednesday in one of two tiebreakers to decide the final entries into the women’s championship round. The teams finished with 3-3 records in Pool A, tied with Prince Edward Island’s Lauren Lenentine (Cornwall), but P.E.I. got the berth based on beating both Atlantic Canada rivals.

There will also be a Pool B tiebreaker Wednesday at 9 a.m. between Northern Ontario’s Krysta Burns (3-3; Sudbury) and New Brunswick’s Samantha Crook (3-3; Fredericton).

It’s been a struggle for the Bluenosers, who have had to adjust to life without skip Mary Fay, who guided the team to the national and world titles last season.

But Clarke feels the team is finally rounding into form.

“We’re stil fighting; we’re picking up some momentum, so if we can keep rolling with the wins, we’ll definitely still be in it,” said Clarke, 19. “It’s been a struggle; we started off slow and we’re just getting there now. It’s too bad we couldn’t start with this momentum, but we’re getting there. And I think we play well when we’re under pressure — that’s where we thrive.”

The women’s teams will carry over their records from the preliminary rounds.

In other women’s results Wednesday night, Streifel made a wonderful double takeout in the 11th end for a 5-4 Alberta win over Saskatchewan; Zoey Walsh of the Northwest Territories (1-5; Hay River) picked up her first win, stealing one in the 10th and two in the 11th for a 7-5 win over Newfoundland/Labrador; Quebec turned back New Brunswick 8-5; and Ontario was a 9-6 winner over the Yukon’s Alyssa Meger (0-6; Whitehorse).

The teams that don’t advance into the championship round will be in a seeding round to determine the pools for the 2018 Canadian Juniors in Shawinigan, Que.

Team Saskatchewan was not only fashionable on Tuesday, but in particularly high spirits. (Photo, Curling Canada/Bob Vanderford)

Once the tiebreaker round is done, games in the men’s and women’s championship and seeding rounds are scheduled Wednesday for 2 p.m. and 7 p.m.