It may be a wildly unorthodox strategy, but it appears to be working for Kristin Clarke’s Nova Scotia team at the 2017 Canadian Junior Curling Championships, presented by Ambrosia Apples. 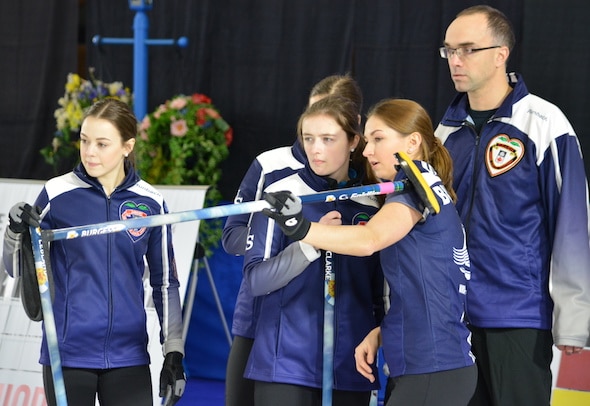 Give up a four-ender and then come back for the victory. Simple, right?

For the second straight game in which a loss would have ended hopes for a repeat national championship, Clarke’s team from Chester did just that, giving up four in the seventh end to Newfoundland/Labrador’s Brooke Godsland (St. John’s) and then coming back to score two in the ninth end, steal one in the 10th and one more in the extra end for a 9-8 victory at the Archie Browning Sports Centre.

“I think it seems like it motivates us to play better in the second half of a game,” said a happy Clarke, whose team is rounded out by vice-skip Karlee Burgess, second Janice LeBlanc, lead Emily Lloyd and coach Andrew Atherton. “We really fought through it, and I think that’s a key thing to carry forward — the momentum we had in the second half, and that fight we had within us. We want to bring that into our next few games.”

It was one of two women’s tiebreakers on Wednesday morning to decide the final entries into the eight-team championship round. In the other game, Northern Ontario’s Krysta Burns (Sudbury) was an 8-5 winner over New Brunswick’s Samantha Crook (Fredericton.

Four teams from Pool A (Alberta, Saskatchewan, Nova Scotia, P.E.I.) will play a round robin against the teams they haven’t played previously from Pool B (Ontario, B.C., Quebec, Northern Ontario), with their records from the preliminary round carried over. The top three teams after the championship round robin will make the playoffs.

Northern Ontario (Burns is backed up by vice-skip Megan Smith, second Sara Guy, lead Laura Masters and coach Rodney Guy) opened the game with a first-end deuce, and then stole singles in the fourth and fifth ends to go up 4-0. New Brunswick made a game of it with a three in the sixth end, but Northern Ontario matched it in the seventh and never looked back.

“We felt pretty good coming off our last round-robin game,” said Burns, skipping in her third straight Canadian Juniors. “We just wanted to use that momentum today. It’s huge, and we like controlling our own destiny. Now that we’ve made it to the championship pool, it’s all on us and what we can do.”

Championship round play begins Wednesday with draws at 2 p.m. and 7 p.m. (all times Pacific).

The teams that didn’t make the championship round will play a seeding round to determine the pools for the 2018 Canadian Juniors in Shawinigan, Que. As well, players who don’t make the playoffs will compete in a mixed doubles tournament Saturday and Sunday.