It’s not on his official bio; there, the skip of Ontario’s men’s team at the 2017 Canadian Junior Curling Championships, presented by Ambrosia Apples, goes by his official first name: Matthew. 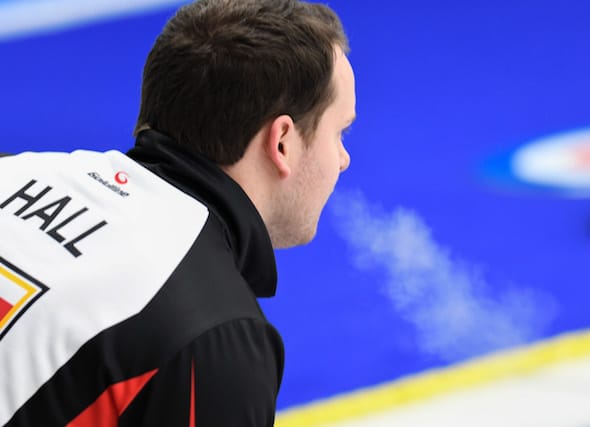 But take a close look at Matt Hall’s water bottle, and you’ll see what he really goes by. Yes, feel free to call him Hot Dog.

The charismatic 19-year-old and his Kitchener team — vice-skip Jeff Wanless, second Joey Hart and lead David Hart — are firmly in the hunt for a playoff position after a 6-3 win over Alberta’s Colton Goller (1-3; Calgary) on Wednesday at the Archie Browning Sports Centre to open the championship round.

And, yes, there may have been a little mustard on that win.

“It’s a huge win,” said the smiling Hall. “We knew that 1-2 doesn’t sound like a great record, but with six teams tied with the same record (1-2), we just saw it like we’re tied for third place. That’s how we’re looking at it, and we’re coming in with as much confidence as we can. If we continue playing well, the score will take care of itself.”

Confidence, evidently, has never been an issue for Hall, a financial mathematics student at Wilfrid Laurier University. The Hot Dog nickname was hung on him around six years ago by another Ontario champ, Molly Greenwood, who won the provincial junior women’s title in 2014.

“I was 12 or 13,” recalled Hall. “It was the kind of attitude I had when I was younger, and I still have it today — a little bit cocky, a little out there, a little showboaty, that kind of thing. She started calling me that when I went to my first mixed (youth) provincials when I was around 13 and it just took off.”

It reached another level at last year’s Canadian Juniors in Stratford, Ont., where Hall was playing second for Ontario’s Doug Kee. His fellow front-ender, Curtis Easter, raised the Hot Dog bar even higher.

“I think I started responding more to ‘Hot Dog’ than Matt,” he said with a laugh. “People were yelling from the stands — ‘Nice shot, Hot Dog!’ Things like that. During the last draw against New Brunswick, Kailyn Gregory from the Ontario girls team got all of the school kids in the stands to chant ‘Go Hot Dog Go.’ Curtis and I were just dying on the ice.”

All well and good, but Hall is showing he has the game to back up the nickname, and with Wednesday’s win, he sits in a playoff position at 2-2, tied with Northern Ontario’s Tanner Horgan (Copper Cliff).

“That was a big one for us; beating the top-ranked team from the other pool is huge for us,” said Horgan, the silver-medallist to Manitoba’s Matt Dunstone last year. “If we keep playing like that, we might be able to rattle off a few more and get to where we want to be.”

The teams that didn’t make the championship round are playing a seeding round to determine the pools for the 2018 Canadian Juniors in Shawinigan, Que. As well, players who don’t make the playoffs will compete in a mixed doubles tournament Saturday and Sunday.