Matthew Manuel and his Nova Scotia team arrived in Victoria last Thursday on a mission. 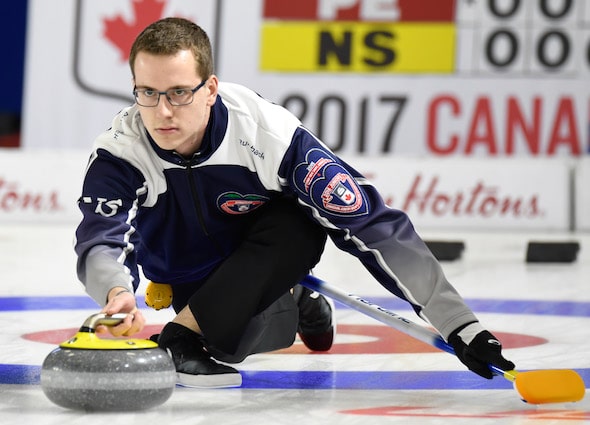 Nova Scotia skip Matthew Manuel says the best is yet to come for his team at the 2017 Canadian Juniors. (Photo, Curling Canada/Bob Vanderford)

Manuel, a 19-year-old engineering student at Dalhousie University, was about to play in his third straight edition of the Canadian Juniors, with the belief that his team had not performed to expectations in its previous two trips.

Through five days of the 2017 Canadian Junior Curling Championships, presented by Ambrosia Apples, Manuel is seeing the signs of something good in the offing for his team from the Mayflower Club in Halifax — vice-skip Adam Cocks (a newcomer this season), second Nick Zachernuk, lead Alex Cameron and coach Stuart Cameron.

The latest evidence was a one-sided 9-2 victory over P.E.I.’s Tyler Smith in championship round play Wednesday night at the Archie Browning Sports Centre.

It was Nova Scotia’s opener in the second phase, and raised its championship round record to 2-2, and 4-2 overall.

“The last two years were tough; I don’t think we really met our expectations,” admitted Manual, whose team finished 4-5 in 2015 at Corner Brook, N.L., and 5-4 last year in Stratford, Ont., and missed out on the championship round on both occasions. “I think we under-performed. But this year, we really showed to to play, and we’re really hungry. We want more.”

The result left Nova Scotia part of a three-way tie for third place in the championship round at 2-2 with Ontario’s Matthew Hall (Kitchener) and Northern Ontario’s Tanner Horgan (Copper Cliff).

Manuel couldn’t have been happier with the way his team performed against Smith’s Islanders (1-3); Nova Scotia broke the game open with three in the fourth end, a steal of four in the fifth and two more in the sixth.

“Absolutely, it’s great to pick up the first win after making the crossover,” he said. “It puts ourselves in a great position going forward into the next two days; we’re really giving ourselves a chance.

“When you get down to those final games, you really have to make the clutch shots, and the team really showed up to play today. I think everyone’s feeling real confident moving into the next three games.”

“I don’t think you have,” he said with a smile. “I think we still have more to show, and I think we’ve been getting better with each game. We’re playing with a lot of confidence right now. We’re really looking forward to playing the big names in the other pool and start the push for the playoffs going into the weekend.”

B.C. (5-1 overall) maintained its lead with an 8-3 victory over New Brunswick’s Liam Marin (1-3, 3-4 overall; Saint John), taking control by scoring four in the third end and stealing a deuce in the fourth.

In the women’s seeding round, New Brunswick’s Samantha Crook (Fredericton) was a 9-3 winner over Zoey Walsh of the Northwest Territories (Hay River) while Brooke Godsland of Newfoundland/Labrador (St. John’s) downed Alyssa Meger of the Yukon (Whitehorse) 13-3.