VICTORIA — B.C. Ferries should start preparing for an influx of curling fans from the Lower Mainland on Sunday morning. 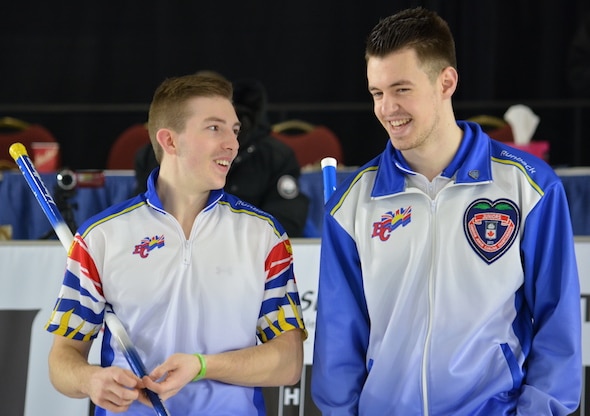 Those fans will be heading to the Archie Browning Sports Centre to cheer on their home-province favourites — the Tyler Tardi team representing the Langley and Royal City (New Westminster) Curling Clubs, which advanced directly to the men’s gold-medal game of the 2017 Canadian Junior Curling Championships, presented by Ambrosia Apples, with a big victory on Thursday night.

The victory improved B.C.’s record in the championship round to a perfect 6-0 (7-1 overall), clinched first place in the round robin and earned a bye directly to Sunday’s men’s gold-medal game (1:30 p.m., all times PST).

“As long as we earn the right (colour), I’m OK with it,” said a smiling Tardi, whose team is aiming to improve on the bronze medal it won at the 2016 Canadian Juniors in Stratford, Ont. “Ever since the championship round started, we’ve been kicking it into second gear. And now, it’s just playing the waiting game.”

While B.C.’s playoff fate is secure, the identity of the two combatants in Saturday’s 5:30 p.m. semifinal won’t be known until Friday.

Manitoba’s JT Ryan (Winnipeg) still had first-place aspirations going into Thursday night’s draw but suffered his second loss of the championship round, bowing 6-5 to Ontario’s Matthew Hall (Kitchener), after Hall coolly drew to the four-foot for the win int he 10th end, looking at two Manitoba counters.

That left Manitoba, Ontario and Northern Ontario’s Tanner Horgan (Copper Cliff) all with 4-2 records in the championship round, while Nova Scotia’s Matthew Manuel (Halifax) is still in the hunt for a tiebreaker berth with a 3-3 record.

Manitoba finishes up Friday at 9 a.m. against B.C., while Ontario takes on P.E.I.’s Tyler Smith (1-5; Charlottetown) and Northern Ontario is up against New Brunswick’s Liam Marin (1-5; Saint John).

Tardi, meanwhile, can use the game against Manitoba — which features, the Tardis’ cousin Jacques Gauthier at vice-skip — as a tuneup for the gold-medal game on Sunday.

“We know it’s going to be a competitive game; we’ve always been super-competitive with our cousin,” said Tardi. “I’m just excited to play. We know our next two games are in the arena, so we just want to get used to that; tune up a couple things. We don’t really need to worry too much about the scoreboard. Just stay sharp.”

Northern Ontario stayed in contention for a semifinal berth with a 7-4 win over Alberta’s Colton Goller (1-5; Calgary), taking four in the first end to set the tone.

Meanwhile, in the women’s championship round, while Ontario’s Hailey Armstrong (Ottawa) is already through to Sunday’s 9 a.m. gold-medal game, nothing is clearer in the race to play in Saturday’s 1:30 p.m. semifinal.

Alberta’s Kristen Streifel (7-2; Edmonton) is in the best position after beating B.C.’s Corryn Brown (5-4; Kamloops) 7-6 on Thursday night, but Alberta still needs to beat Ontario on Friday morning in order to clinch a semifinal berth.

Northern Ontario’s Krysta Burns (Sudbury) and Quebec’s Camille Boisvert (Lévis) are close behind at 6-3. Quebec had the bye Thursday night while Northern Ontario rolled to a 6-2 win over Nova Scotia’s Kristin Clarke (3-6; Chester). B.C. isn’t out of it, but would need to beat Saskatchewan’s Kaitlyn Jones (4-5; Regina) on Friday morning, and would need both Quebec, against Nova Scotia, and Northern Ontario, against P.E.I.’s Lauren Lenentine (4-5; Cornwall), to lose their games.

Play continues at the 2017 Canadian Juniors on Friday with a draw at 9 a.m., followed by a tiebreaker, if necessary, at 2 p.m. (all times Pacific).

The top three teams at the conclusion of the championship rounds will go into the playoffs. The second- and third-place teams will meet in the semifinals on Saturday (women at 1:30 p.m.; men at 5:30 p.m. All times Pacific), with the winners moving into the championship finals against the first-place teams. The women’s gold-medal game is at 9 a.m., followed by the men’s gold-medal game at 1:30 p.m.