After splitting two games on Wednesday, Team Canada’s Kelsey Rocque remains close to the leaders – and a possible playoff spot – at the 2017 Winter Universiade in Almaty, Kazakhstan. 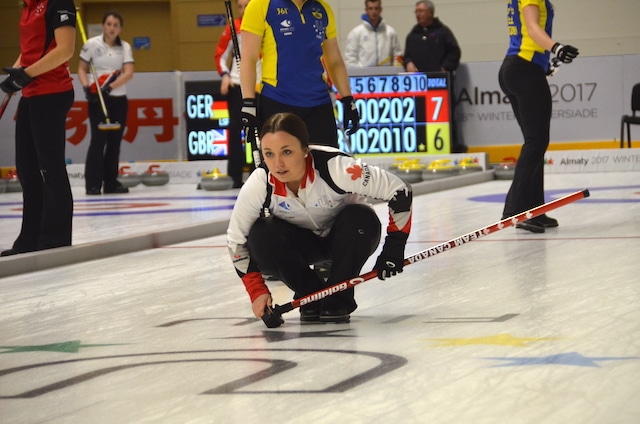 Rocque and her University of Alberta Pandas team of vice-skip Danielle Schmiemann, second Taylor McDonald, lead Taylore Theroux and coach Garry Coderre kicked off the day with a 7-4 win over Russia’s Victoria Moiseeva, but lost 9-5 to Great Britain’s Gina Aitken in the evening draw. “I thought we actually played pretty well, to be honest,” said the Canadian skip about tonight’s loss. “We just missed a few opportunities, missed our spots here and there. Up until the ninth end, we were playing well and were right in it.” Canada trailed 6-5 after eight ends, but a big score of three in the ninth put the game out of reach. “The Brits are a good team,” Coderre agreed. “We’ve seen them a whole bunch of times in juniors. They’re no pushovers, they know how to play the game and they were up for it tonight. I felt our girls played well. In a game like that, you just wait for somebody to make an error, and tonight nobody really made an error, they were all making good shots. Hats off to them.” Rocque now sits behind Great Britain and Switzerland (both 4-1), tied with three other teams in a battle for second place (3-2). Coderre feels confident about his team’s chances of making the playoffs. “We’re fine,” he said. “The objective when you come to a tournament like this is to make the playoffs, and the top four teams do. That’s what you shoot for. You do your best to be in the top four and move forward.” In the men’s competition, Aaron Squires and his Wilfrid Laurier Golden Hawks team of vice-skip Richard Krell, second Spencer Nuttall, lead Fraser Reid, alternate Russell Cuddie and coach Jim Waite had a tough day on Wednesday, losing to the USA’s Alex Leichter 6-4. Canada trailed 5-4 after eighth and blanked the ninth, hoping to score their deuce in the tenth. But that plan backfired when the Americans stole a single for the win. “We just did not play well today, from start to finish. We kept it simple but it was just one of those days where it seems nothing is working,” said Waite after the game. “It wasn’t one person, we just didn’t play well as a group.” With the loss, Squires joins a logjam of eight men’s teams with 2-2 records in the standings. Great Britain’s Bruce Mouat continues undefeated (4-0) at the top, and Daniel Kim of Kazakhstan is still winless. Thursday’s games – against Japan’s Kohsuke Hirata (Wednesday 10 p.m. EST) and Sweden’s Patrik Mabergs (8 a.m. EST) – will be crucial in determining who climbs closer to playoff position. Rocque will have a chance to bring one of the leaders back to the pack when she meets Switzerland’s Briar Huerlimann on Thursday (3 a.m. EST). Live scoring will be available on the official event website, almaty2017.com/. The medal-round games will be shown on www.livefisu.tv/