Aaron Squires remains in a logjam right behind the leaders in the men’s competition, and Kelsey Rocque climbed into second place in the women’s as Team Canada continues to battle for playoff spots at the 2017 Winter Universiade in Almaty, Kazakhstan. 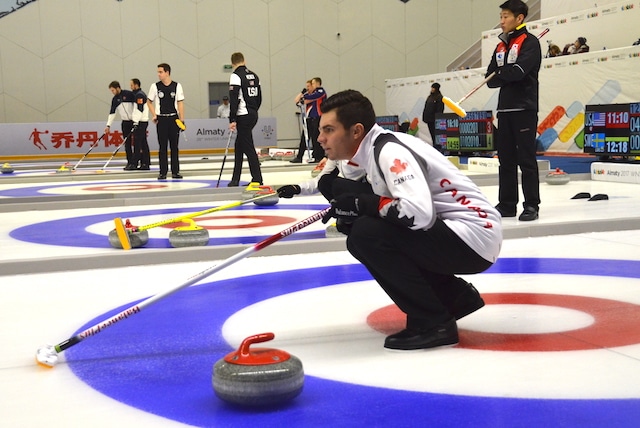 Team Canada skip Aaron Squires calls the line during the men’s round robin at the 2017 Winter Universiade in Almaty, Kazakhstan (Mark Bartschat photo)

Squires started off strong on Thursday with a 6-5 win over Japan’s Kohsuke Hirata. Despite the seemingly close score, he and his Wilfrid Laurier Golden Hawks team of vice-skip Richard Krell, second Spencer Nuttall, lead Fraser Reid and alternate Russell Cuddie were in charge from start to finish. “This was a big one for us. It was our best game by far,” said Squires. “The score was close but we controlled the game. We really needed to bounce back after last night’s loss, which really took some wind out of the sails. It’s good to win the early one, and hopefully build on that and have a good game tonight against Sweden. We need a little momentum.” Team Canada coach Jim Waite couldn’t agree more. “That was more like we should be playing,” he said. “We had a good team meeting last night and refocused. We made a few mental changes and a little bit of strategy stuff. The guys played a very sound game today. I know it looks close on the scoreboard but it was never that close. We were in control all the way.” That momentum didn’t swing Canada’s way in the evening game against Sweden’s Patrik Mabergs, however. Trailing 4-1 after six ends, Squires scored a big three in the seventh to tie it up, but then slipped behind again as the Swedes took their deuce in eight and stole in nine, handing the Canadians their third loss of the round robin. “That was a wonderful shot by Aaron (in the seventh) because we had been chasing the whole game and that got us back tied,” said Waite after the loss. “Then in the eighth end we had two chances, one with our third, and then Aaron missed a double, both of them by a quarter of an inch. That’s what it’s been like.” On Friday, Squires will face Czech Republic’s Lukas Klima (3 a.m. EST ) in a crucial game that could determine who takes over possession of fourth place in the standings. “We’re going to bounce back,” said Waite. “We’re still in it. We need to win tomorrow and then win at least one of our next two, and hopefully be in at least a tie-breaker.” On the women’s side, Kelsey Rocque moved closer to securing a playoff spot with a 6-5 extra-end win over Switzerland’s Briar Huerlimann. “I actually though we played pretty well,” said Rocque about the close game. “It’s just tough to defend against really good teams once you get a lead. But we’re happy to come away with the win. A win is a win!” Leading 5-2 after eight, Rocque and her University of Alberta Pandas team of vice-skip Danielle Schmiemann, second Taylor McDonald, lead Taylore Theroux and coach Garry Coderre saw that lead shrink as the Swiss scored two in the ninth, then stole a point in ten to tie it up. A single in the extra end gave Canada the 6-5 win and helped cement their second-place position in the standings 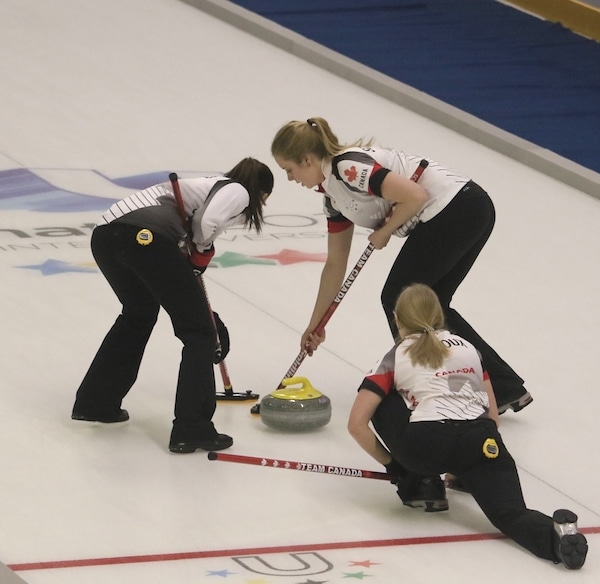 Team Canada in action during Women’s round robin competition at the 2017 Winter Universiade in Almaty, Kazakhstan (Almaty2017.com photo)

“We were doing all the things that we wanted to do within the structure of the game,” added Coderre. “We made a couple of half shots in key moments, and the other team capitalized. Which is great for them, this is what the game is all about. We had a chance to win the game in the tenth. Kelsey threw a good rock but it just curled a little more than it needed to. But from my point of view, in these close games, I’ll believe in my girls every time because they’re very comfortable in that environment. Our skip proved it again.” On Friday, the women will face Kazakhstan’s Ramina Yunicheva (Thursday 10 p.m. EST) and South Korea’s Eunjung Kim (8 a.m. EST). Live scoring will be available on the official event website, almaty2017.com/. The medal-round games will be shown on www.livefisu.tv/